Farming the 'long-necked thing’: moving from cows to camels

A move from cattle herding to camel keeping among Kenyan farmers is more than an economic transition, it represents a fundamental shift in age-old customs.

Some observe a taboo that forbids them from saying the word camel, which they describe as ‘the long-necked thing’

It’s a long and bone-shaking drive from Nairobi to the Marsabit County of northern Kenya.

Marsabit has an arid landscape, prone to drought, with dusty lowlands leading up to forested volcanic highlands. The thousands of people who make a living from the land here – among them the Boran and Gabra – are pastoralists. For as long as anyone can remember, they have moved with their livestock, following the rain to find grazing.

In 2012 Dr Elizabeth Watson, a human geographer who specialises in eastern Africa, spent a month carrying out fieldwork in Marsabit. It wasn’t her first trip to the region: she trained as an anthropologist and an earlier study of the relationship between landscape and ritual had brought her into contact with the Boran and neighbouring groups. She returned last year with a more specific set of objectives: to understand why the Boran people, whose culture has been traditionally tied to cattle herding, are now turning to camel keeping.

She said: “Camels were by no means unknown to the Boran but they were always considered inferior by people whose daily lives are linked to the cattle which provide them with milk, meat, ritual goods and trading opportunities. Boran identity is so strongly connected to cattle that it is often said that ‘to be Boran is to have cattle’, and some observe a taboo that forbids them from saying the word camel, which they describe as ‘the long-necked thing’.”

Yet, whereas cattle are demanding in terms of their needs for water and fodder, camels have an extraordinary ability to survive for a long time without water and to live on harsh scrub vegetation, and they produce rich, nutritious milk over long periods.

“Faced with increased aridity and pressures of food security, the Boran people began investing in camels as an alternative or addition to cattle around 16 years ago,” said Watson, whose research was funded by a Thesiger Oman International Fellowship and the Royal Geographical Society with IBG. 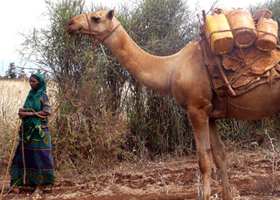 “An investigation into how people negotiate such a profound change of lifestyle forms one of the chief strands of my fieldwork. There’s an assumption that pastoralists, who are seen as being highly traditional, will be resistant to change. In fact they are highly flexible and pragmatic. People spoke to me warmly about the advantages of camels over cattle. And when I asked them how they would pay for brides, they said they would sell a camel to buy cattle so that the ritual would be upheld. It’s an interesting example of people’s ability to adapt to changes and embrace opportunities.”

While cattle herding took the Boran on long treks to distant water points in times of drought, camels are happy to live near or in town where they feed on the liquid-rich euphorbia hedges that surround many compounds. “One man said he hadn’t taken his camel to water for three years. Proximity to town gives herders access to a ready market for milk and they are able to sign contracts with shopkeepers and café owners,” said Watson. “We also found that while the milking of cattle was one of the duties carried out by women, both men and women were involved in milking camels.”

Camels bring new challenges as well as advantages. There are few vets in rural Kenya and camels suffer from a range of diseases, some of which can affect humans. Watson said: “While some people said that their camels were flourishing, others said that their animals had become sick and had died. There was a lack of knowledge and medicines to treat them. Certain breeds of camel are more suited to harsh, rocky areas than others, something not always understood by the development organisations who, seeing the new preference for camels, have started to give them out as a form of restocking.

Watson’s work will not only inform NGOs but also provide much-needed information about the challenges faced when a society adapts to pressures such as the need for food security.