We ask how a 'matchmaking' programme that teams up Cambridge and African researchers is making expertise and resources available to support Africans working in Africa.

Universities are not just luxury items for wealthy societies. They are equally vital to the futures of low- and middle-income countries if those countries are to share in the advantages of knowledge creation

Knowledge lies at the heart of social and economic development, so countries with a thriving knowledge economy and good research infrastructure develop quicker; and the gap between those that don’t have these advantages grows ever wider. Among those lagging behind are many of the African countries.

And yet, explains Professor David Dunne, Africa has excellent researchers. He knows because for 30 years he’s been working in Africa with African colleagues on neglected tropical diseases: “I realised that they were brilliant but they didn’t have the opportunities they deserved to make their unique contribution both to solving Africa’s challenges and to adding to the sum of global knowledge.

“Even in the best African universities, there is a chronic shortage of researchers with access to the resources they need to be internationally competitive and to mentor future researchers,” he explains. “There just aren’t enough of them.”

“In parts of Africa, sometimes the choice seems to be between prioritising universal access to a basic education or investing in tertiary education and research scholarship. In reality, there is no choice,” says Dunne. “Both are absolutely essential.”

Eight years ago, he realised that universities like Cambridge could help bridge this resource and mentorship gap in Africa in ways that would build research capacity “while avoiding the loss of indigenous talent that so often occurs when better opportunities are available outside of Africa.”

Cambridge-Africa is the result. This University-wide institutional structure is designed to make expertise and resources available to support African researchers working in Africa on African priorities. 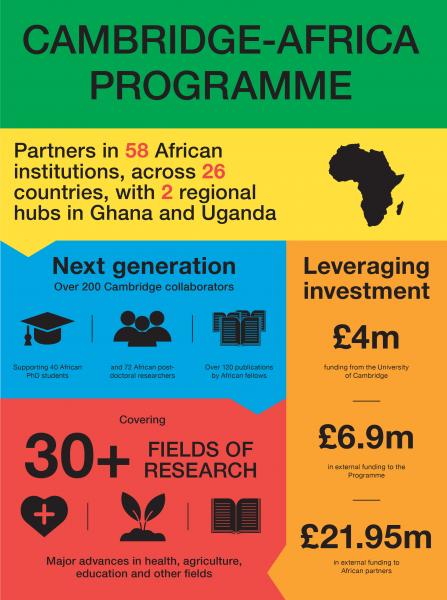 Today, the Programme supports African researchers in 58 different institutions in 26 countries across the continent. Its various schemes link PhD, postdoctoral and group leaders with a network of over 200 Cambridge-based researchers.

Key to its success is a ‘matchmaking’ model of partnership, as Dr Pauline Essah explains: “We carefully match the research interests of African and Cambridge researchers. It means there are benefits for both parties, and the potential for equitable and sustainable long-term collaboration after the mentorship has finished.”

She adds: “Being an African myself, and having studied in an African university before studying and working in Cambridge, I know that it wouldn’t work if we were just trying to take what Cambridge has and plant it in Africa. Instead we are modifying and adapting it in response to the needs identified by our African colleagues.” 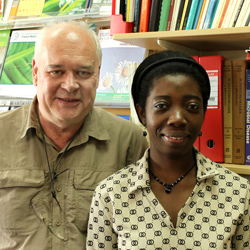 Dunne and Essah began with targeting research in health: “We saw this as an easy win on both sides – it meets one of Africa’s greatest challenges, and it gives wider geographic scope to Cambridge researchers.”

They were surprised however by the scale of the response: “We were pushing against an open door,” says Dunne. Soon, scholars from archaeology to zoology, engineering to English, politics to plant sciences were joining the scheme. In 2015, the Programme was adopted as the University of Cambridge’s official international strategy to support African academia across all subject areas.

“And of course this is good for Cambridge too,” says Dunne. “It means our researchers have greater opportunities to collaborate globally and our students can experience working in Africa. It has helped make Cambridge a truly international University.”

Speaking at the annual Cambridge-Africa Day symposium, Cambridge’s Vice-Chancellor Professor Sir Leszek Borysiewicz said: “The speed with which the Cambridge-Africa Programme has developed is phenomenal. We are trusted by our partners, and the Programme has buy-in from our academic community. This has been essential to the programme’s success. Today, it is no longer something done by a handful of enthusiasts. It is now something embedded in the University’s DNA.”

Adds Dunne: “The first of the Cambridge-Africa fellows are now starting to fulfil their outstanding potential as researchers and leaders, providing mentorship to the next generation of young African researchers.” To date, all 54 of the African PhD and postdoctoral researchers who have completed their fellowships are still working in sub-Saharan universities or research institutions.

“Universities are not just luxury items for wealthy societies,” he says. “They are equally vital to the futures of low- and middle-income countries if those countries are to share in the advantages of knowledge creation.”

Cambridge-Africa fellowship schemes are funded by the Wellcome Trust, the ALBORADA Trust, the Isaac Newton Trust and the Carnegie Corporation of New York.