Romantic notions of heroism - the captain refusing to leave his sinking ship, women and children being ushered to safety - have been shattered by reports emerging from the Costa Concordia. Cambridge University academic Dr Lucy Delap sets last week’s tragic events within a historical context of shipwreck that encompasses changing perceptions of class and gender.

‘Women and children first’ was much more contested in the past than today’s news coverage would have us believe.

Barely three months short of the centenary of the sinking of the Titanic, which went down on 15 April 1912, another shipwreck has galvanised the world’s attention. With tragic stories of loss, chaos and fear, shipwrecks have always fascinated onlookers, and been used to convey moral lessons. The Costa Concordia has reignited the potent debates over how one should behave in an emergency shipwreck situation.  It is clear from the media response that the old question of whether ‘women and children’ should go first remains just as significant in 2012 as it seemed in 1912.

The world’s press has dwelt on the lack of precedence of women and children aboard the 21st century sinking ship, with particular emphasis on the failures of professionalism and chivalry shown by the Italian captain, and his crew.  Tales are circulating of burly crew members pushing pregnant women and children out of the way, and the failure of captain and crew to ensure that all were rescued before departing from the ship themselves.  This, it is widely assumed, runs counter to all the traditions of international – and certainly British - codes of masculine honour which, in more dignified times past, put the vulnerable ahead of the chivalrous male.

The Titanic is often conjured up in support of this historical assumption, as a shipwreck in which men bravely put women and children into the lifeboats, and met a freezing death as a result.  There was indeed self-sacrifice aboard the Titanic, but ‘women and children first’ was much more contested in the past than today’s news coverage would have us believe.  In 1912, plenty of people – and especially women and working class men - were forceful in their critiques of ‘women and children first’, and recognised that what seemed at first sight to be a humane impulse to help those whose youth, heavy dress or physical frailty made them vulnerable in a shipwreck actually acted as a heavy-handed method of diminishing certain men, and enforcing a particular role for women.

The wreck of the British troop ship, the Birkenhead, in 1852 has often been seen as the paradigmatic example of ‘women and children first’.  However, a survey of 19th century shipwreck narratives uncovers a relative lack of concern with the survival of the more vulnerable. A survivor from the emigrant ship the Northfleet, sunk in 1873, described meeting clusters of women as the ship went down, but ‘did not stop to speak to them for I was looking towards the boats, thinking that I might get hold of one of them yet’.  When asked by a mother to save her baby, he records: ‘I could not do anything. For I felt the last had come.’  In the end, only one woman and two children were saved, while 83 men were rescued. A survivor of the Pegasus wreck in 1843 wrote: ‘… the stewardess attempted to get hold of me, but I extricated myself from her in order to save my own life.’  It turned out that not all women were equally deserving of protection at sea.  Lower class women – wives of sailors or soldiers, or poor emigrant women – were frequently excluded from the rule, and women of colour were equally marginalised.

In many famous shipwrecks, women had to be removed by force.  Their own choices were often to remain with their male relatives, or in the perceived safety of the ship. In some cases they were simply locked up in their cabins, as their hysteria was perceived to be dangerous.  According to a survivor from the Evening Star, sunk in 1866, ‘… women rushed on deck, and sobbed and wept, ceaselessly demanding if there was no hope of safety.  The captain was compelled, as a measure of precaution, to send them below again, and fasten the doors of their cabins’.  Victorian women, then, were to be contained; the rule giving them precedence was partly for the relief and safety of the men on board ship.  As it was practiced, ‘women and children first’ often resulted in women being treated as objects rather than being given special protection.

The Victorians believed that only certain men were capable of putting women first.  Men of colour or working class men were often described as failing to observe ‘women and children first’.  In the sinking of the Northfleet, a survivor noted ‘there was a terrible panic … among the strong, rough men, when it became apparent that the vessel was sinking.  The wild rush for the boats, and the mad confusion which took place, were like the trampling of a herd of buffaloes.’  This language of animality was common within shipwreck narratives – the panicked men were frequently compared to wild animals (‘rabid tigers’, ‘hornets’, ‘wild-cats’) and pictured as stampeding, trampling, or baying.  Within these narratives, the ship’s captain or commanding officers typically played the role of proposing or enforcing ‘women and children first’, by appealing to the moral sensibility of the men or, more commonly, by violence. 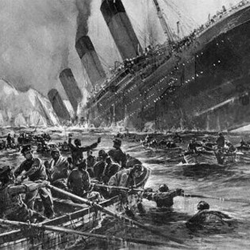 The focus of shipwreck narratives was on men controlling other men, rather than on the role or fate of women at sea. As more ‘ordinary’ working men such as stokers came to replace the skilled sailors of older maritime traditions in the late 19th century, there was growing concern over the lack of purchase chivalry would have at sea.  When the Titanic sank in 1912, there was no certainty that men would put women first. If ‘women and children first’ was insisted on and celebrated at that moment, this was because no one was sure that it would persist.

The survivor reports of the Titanic sinking, which saw the loss of more than 1,500 lives, were variable: some stressed calm and women’s precedence, others talked of masculine selfishness and loss of control, particularly among immigrant or working class men.  It was only after a few days that a consensus emerged; in the Titanic disaster, the papers began to argue, all men had put women first, whatever their class and ethnicity. This was a new departure in shipwreck narratives, and was an emphasis that was intended to counter the troubling feminist activism of this period.

The Edwardians were confronting a new idea – that women might not want to be put first in shipwrecks; they might prefer equality, not only in rescues, but also in politics and labour markets.  In the early 20th century, feminist and suffragist women were well aware that the myth of male chivalry during shipwrecks was used to exclude them from positions of power in politics and society. They responded to the Titanic disaster with the memorable slogan, ‘Votes for Women, Boats for Men’, stressing that women voters would put human lives above corporate profit in regulating the ocean liner companies.  They emphasised the irony of putting women first in shipwrecks, only to exploit or exclude them systematically in other realms.  And some suggested that the vulnerable – the weak, the elderly, the very young - should precede the strong, whatever their sex.

The Edwardian media were forced to acknowledge that women might make their own choices.  The choice of Mrs Isidor Strauss to remain with her husband on the Titanic was widely reported and respected – Edwardian women at sea were not just objects, but had some potential for making choices themselves.  The more radical Edwardians noticed that there was a class bias against working class passengers surviving the wreck – the widespread celebration that women and children had gone first aboard the Titanic evaporated in the realisation that ‘women first’ might actually mean ‘ladies first’.

The celebrations of the so-called ‘law of the sea’, ‘women and children first’ did not last very long after 1912.  In the years after the Titanic’s sinking, the initial emphasis on universal male chivalry was replaced by a tendency to stress Italian or Southern European failures of chivalry among the Titanic passengers.  The Daily Mail had reported just after the wreck in 1912 that: ‘There are only a few exceptions to the unvarying tales of heroism, and the exceptions are due to the excitement at the last moments in the steerage … three Italians who disobeyed the rule of the sea, ‘women and children first’, were shot down.’ This became a more prominent part of the story.

The Costa Concordia is eerily echoing this emphasis in the media frenzy over the culpability of the Italian captain, who was reported to be flirting rather than at his post in the hours before the shipwreck. Whatever the investigation reveals, it is clear that shipwrecks have long been used as a jumping off point for asserting hierarchies of ethnic or gender difference; we must be careful not to allow ethnic stereotypes to be used uncritically.  Nor should we take the past as a period in which values of chivalry and women’s precedence were widely agreed upon or practiced.

Lucy Delap is a Fellow and Director of Studies in History at St Catharine’s College, Cambridge. Her paper “Thus does man prove his fitness to be the master of things”: Shipwrecks, Chivalry and Masculinities in Nineteenth and Twentieth Century Britain’, appeared in Cultural and Social History, volume 3, 2006. Lucy’s book Knowing Their Place: Domestic Service in Twentieth-Century Britain was published by Oxford University Press in 2011.