Opinion: How we can make super-fast hyperloop travel a reality

Trains are getting increasingly faster, but as Professor Hugh Hunt from the Department of Engineering explains, the 'super-fast hyperloop' could soon see them matching air travel fo speed.

Across Europe and parts of Asia, travellers can enjoy some of the fastest rail services in the world. From Málaga to Madrid, Tokyo to Osaka, high-speed electric trains condense the travel times between major hubs by racing along at some 300kph. The fastest commercial service in the world is the Shanghai maglev – short for magnetic levitation, the method of propulsion it uses to glide along its tracks as rapidly as 430kph.

Of course, air travel is still much faster: an Airbus A380 aircraft has a cruising speed of over 1,000kph. But at a time when reducing emissions is a top priority across the globe, there’s an urgent demand for cleaner, more energy-efficient alternatives – especially in the US, which is by far the world’s biggest user of air travel, with almost 800m passengers each year. Enter, the Hyperloop – a train-like technology which has the potential to match air travel for speed.

Hyperloop is the brainchild of US business magnate Elon Musk. First proposed in 2013, the Hyperloop system consists of “pods”, which are suspended inside a tube by magnetic levitation and propelled using a linear electric motor. The environment inside the tube is almost a complete vacuum, allowing the pods to travel at great speeds without being slowed by air resistance. The tubes themselves can be placed underground, or run above ground, elevated by columns.

Musk originally intended the Hyperloop to cover the 600km route from Los Angeles to San Francisco at an average speed of about 960kph, reducing what’s currently a 12-hour train journey to just 35 minutes. Although funding has since been channelled into a bullet train service for this route, the idea of the hyperloop has attracted interest elsewhere.

The wealthy city-state of Dubai has agreed to conduct a feasibility study for a 150km link with Abu Dhabi. There’s also a proposal to connect Vienna with Budapest and Bratislava. And US start-up Hyperloop One recently announced a shortlist of 35 potential hyperloop test projects, which included proposals for routes linking Sydney with Melbourne, London with Edinburgh and Mumbai with Delhi.

While these developments have sparked much excitement, some remain sceptical about whether they can work in the real world.

Too fast to function?

Hyperloop pods are designed to reach their top speed of 1,220kph (slightly less than the speed of sound) in about 70 seconds, when accelerating at 0.5G (the “G” refers to “G-force”, which is how we measure acceleration).

To put this in context, at 1G we are pushed into the back of our seat with a force equal to our body weight – it would be uncomfortable. But the acceleration of an aircraft during takeoff is typically around 0.4G, and most people are happy with that.

We also experience G-forces when we go around a curve. This “centrifugal force” is what flings you from side to side on fairground rides. Again, about 0.5G is the limit for comfort. Travelling at speeds of 1,220kph sets the minimum curve radius to about 23km, which means that the track has to be pretty straight. It must be very level, too, because vertical hills and bumps also give rise to G-forces.

With the right site, these constraints could be manageable. The real challenge for hyperloop will be dealing with earth movements. In all large-scale engineering, allowances are made for thermal expansion, ground water and seismic activity – things that make the ground shift around. Normally, these aren’t too much of a problem. There are expansion joints in bridges and pavements, and even when subsidence causes cracks to appear in a wall, we shrug our shoulders and say “so what?”.

But movement in the hyperloop track could cause real problems, when the pods are travelling at such high speeds. That’s why Musk favours a track on columns, so that it can be adjusted and realigned in the event of ground movement. Indeed, we already do this kind of realignment with conventional railway tracks: the rails on sleepers are loosely supported on ballast and regular “tamping” ensures that the track is kept straight.

With such demanding specifications, actually constructing a hyperloop will not be cheap. But the days of aircraft and ships are numbered, unless we can find a way to power them with electricity or hydrogen fuel. Perhaps we could even learn to live with nuclear-powered ships. Hyperloop offers a novel vision of the future of long-distance travel – one that might just catch on. 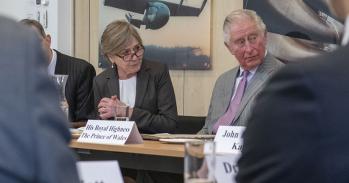