Opinion: How to start healing those Brexit family rifts

A difference in values can be a major stumbling block for family relationships, writes Dr Lucy Blake from the Centre for Family Research for The Conversation website, and these may have been exacerbated in the recent Brexit debate. So what practical steps can people take to help heal rifts?

It has been an emotional month for many in the UK. After the sadness and anger that followed the tragic murder of MP Jo Cox, many people now feel fearful and apprehensive as the consequences of the EU referendum begin to reveal themselves.

It has also been a divisive time, and the number of racist incidents reported to the police has risen in the days since the vote. Facebook and Twitter feeds have been filled with an outpouring of anger, shock and shame from those who voted Remain, and celebration and pride from those who voted Leave.

These feelings of anger, fear and division may well be resonating in our families. Polling data suggests that while messages of internationalism and inclusiveness struck a chord with young voters, their mothers, fathers and grandparents may have been swayed by the Leave campaign’s pledge to “take back control”.

A difference in values can be a major stumbling block for family relationships. In my own recent research in collaboration with the charity Stand Alone, a clash in personality or values was cited as a common cause of relationship breakdown between parents and their adult children, as well as relationships between siblings.

A number of different factors and experiences typically contribute to family rifts. But a difference in values may be particularly significant. In a US study of mothers estranged from adult sons and daughters, the estrangement was more likely to be attributed to a difference in values rather than their child’s engagement in socially unacceptable behaviour – such as engaging in criminal activity or substance abuse.

Division between “leavers” and “remainers” is already having significant impact on some families. So what practical steps can people take to help heal rifts that may have been caused or exacerbated by the EU referendum?

The following is not a recipe for achieving the “perfect” post-Brexit family, but rather is a list of suggestions, informed by research on family relationship breakdown and well-being, that might be helpful.

Jo Cox’s compassion has been praised by her family, friends, colleagues, community, and politicians and leaders around the world. It may be challenging to extend tolerance and compassion to “Brexiters” and “Remainers” alike when discussing the EU referendum and its consequences, but as Jo reminded us in her maiden speech in parliament: “We are far more united and have far more in common with each other than things that divide us”.

Lucy Blake, Research Associate at the Centre for Family Research, University of Cambridge 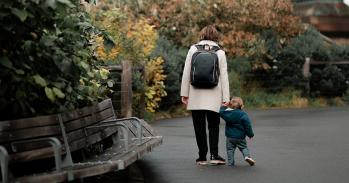 In the huff (cropped and manipulated)