Cambridge’s engagement with India has evolved from scholars working on India to scholars working with, and increasingly, in India – on shared priorities, to mutual advantage. Joya Chatterji, Toby Wilkinson and Bhaskar Vira explain why this is, as we begin a month-long focus on some of our India-related research.

India is the world’s largest democracy. By 2028, it will have overtaken China to become the world’s most populous nation. India currently has the fastest-growing economy among the BRIC (Brazil, Russia, India and China) countries. It combines ancient cultural and religious traditions with cutting-edge technological innovation and a commitment to scholarship and learning across all fields and disciplines. India is the major regional power in South Asia, and a rising power on the world stage. If the 21st century is the ‘Asian century’, it also looks set to be India’s century.

There has never been a better, nor a more compelling, time to engage with India – with its culture, its knowledge, science and technology, its world-view and, above all, the talents of its people. Indeed, we cannot hope to understand the contemporary world without understanding India. We cannot hope to address the major global challenges without an Indian perspective and Indian involvement.

For a university such as Cambridge, whose mission is ‘to contribute to society through the pursuit of education, learning and research at the highest international levels of excellence’, engagement with India is not merely desirable, it is essential.

Enhancing engagement with India is a strategic priority for the University of Cambridge, building on broad, deep and enduring links. For over 150 years, Cambridge has enjoyed a particularly close relationship with India. From the mid-19th century, when the first students from India arrived in Cambridge, scholarship and lasting friendship have been the foundation of academic partnership. Three Indian Prime Ministers were educated at Cambridge, and in turn the University is now home to distinguished academics from India across all fields of the arts, humanities, social, physical, biological and medical sciences.

Partnership between Cambridge and India is both relationship- and research-led, with a large number of individual collaborations. Cambridge researchers are working with colleagues in India’s leading research institutes and universities, corporations, government departments and civil society organisations, to solve challenges which face not just India, but the whole world in the 21st century.

In the biomedical sciences, collaborations are tackling the most pressing issues affecting global health, from antimicrobial-resistant tuberculosis to novel cancer therapies. With a growing middle class, India, like the West, faces an epidemic of non-communicable diseases such as diabetes; large-scale partnerships in public health between India and Cambridge offer the prospect of better interventions and treatments.

India has a strong tradition in the physical sciences and technology; recognising this complementary expertise, Cambridge researchers are working with colleagues in India to drive forward developments in solar energy, fuel cells and nanoscience. As an emerging economy, India has had to pioneer the art of frugal innovation, producing devices for a fraction of their cost in the West. As the UK and other advanced economies cope with austerity, India has much to teach the rest of the world about doing more with less. Here, the Centre for Indian and Global Business at the Cambridge Judge Business School leads the way in engaging with Indian companies and entrepreneurs, for mutual learning.

India faces significant environment and development challenges, for the provision of energy, water and food security to its people, and ensuring safe, sustainable and dignified livelihoods in the context of environmental and climatic changes. Research led by the Department of Geography, and in the University’s Strategic Research Initiatives on Biodiversity Conservation, Energy and Global Food Security, is providing insights into ways in which policies can be implemented across this difficult nexus, and is engaging with state and national level government agencies and research institutions in India to explore solutions.

The British government has recently expressed its wish for the UK to be India’s ‘partner of choice’ in the 21st century, building on the shared history between the two nations. Partnerships in research and education are leading the way in forging this contemporary alliance.

To strengthen the established UK–India Education and Research Initiative (UKIERI), where Cambridge academics have had notable success, in 2014 the two governments launched the Newton–Bhabha Fund (named after two great scientists, one English, one Indian, both educated at Cambridge). Cambridge research teams are at the forefront of the collaborations being supported by this new scheme.

While science and technology dominate the inter-governmental research agenda, Cambridge has rich traditions of scholarship in the arts, humanities and social sciences, and wishes to deepen its partnership with India in these fields. This year marks the 50th anniversary of the Centre of South Asian Studies; within the Centre and across the University, scholars are working on all aspects of Indian history, society and culture, from democracy and migration to religion and identity. Cambridge has an unrivalled opportunity, and a major responsibility, to work with Indian colleagues to demonstrate the importance of the humanities and social sciences at the heart of scholarly enquiry and of the ‘grand challenges’ agenda.

Looking to the future, the partnership between Cambridge and India is being progressively strengthened, by enhancing existing collaborations and launching new ones. There are exciting prospects for a major UK–India initiative in crop science, with Cambridge as a core partner through its Global Food Security Strategic Research Initiative; while the role of education in the development of India and the global South is the focus of a new centre for international education, based in the Faculty of Education.

New models, too, are being developed to strengthen the India–Cambridge partnership. The University has created five new postdoctoral fellowships, jointly funded by the Government of India’s Department of Biotechnology, which will enable early career researchers to work on collaborative research projects between Cambridge and partner institutions in India; each fellow will spend 60% of their time based in India. The University is establishing a wholly owned, not-for-profit subsidiary in India, which will make it easier for Indian businesses, institutional and individual funders to support the growing volume of joint activity in India.

Cambridge’s engagement with India has evolved from scholars working on India to scholars working with, and increasingly, in India – on shared priorities, to mutual advantage. For the University, the commitment ‘to contribute to society’ carries a global responsibility. Partnership with India – the rising power of the 21st century – is both a demonstration and affirmation of that commitment.

Professor Joya Chatterji is Director of the Centre of South Asian Studies; Dr Toby Wilkinson is Head of the International Strategy Office; Dr Bhaskar Vira is Director of the University of Cambridge Conservation Research Institute and a Reader in the Department of Geography 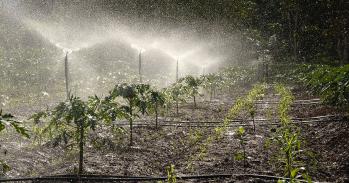 Conservationists may be unintentionally spreading pathogens between threatened animal populations

Mid-19th-century map with a line linking Britain to India