How education leads to independence: exploring university with Realise

Cambridge colleges, departments, museums, academics and undergraduates joined forces in February to welcome children in care for a taste of university study.

Realise is about opening their eyes to higher education choices, improving their options and making it an expectation that university can be something for them.

February half-term’s events were organised as part of the collegiate University’s Realise project.

Realise works to encourage children in care to continue their education beyond school, and to offer advice on the financial and other support available to help them do so.

Each of the three days had a different theme.

Trinity Hall and the Sainsbury Laboratory hosted the students for Natural Sciences Day. Under the supervision of research scientists Thomas Rey and Sandra Cortijo, the Realise participants set up and ran an experiment using plant infiltration, a technique used by researchers and technicians daily at SLCU, to explore how plants react to drought conditions.

Also at SCLU, Siobhan Braybrook led a workshop using fundamental scientific skills of observation, measurement, and naming, to identify which plant they had in front of them and which parts were present, missing or modified due to human selection.

"I have never had such enthusiastic students,” commented Siobhan. “It was great to watch them make the connection between what they eat and what it actually means for the plant.”

Elisabeth Burmeister, Events and Outreach Manager, said “SLCU is keen to generate enthusiasm for higher education in general and plant science in particular, and is pleased to support the University's Realise programme.

“This particular group of children were committed, engaged and full of enquiry. A participant wrote that the day had 'encouraged me to be a scientist'; we are delighted that our programme may have played a part in helping this aspiration to become reality,” Elisabeth added.

Selywn College hosted Languages and Culture Day, for students interested in languages, to give a taste of the breadth of higher education courses available which combine language with another subject.

Dr Shady Hekmat Nasser gave a sample lecture introducing some of his research on the traditions around the recitation of the Qurʾān, while Hannah Weibye discussed the links between language and national identity.

“The sample lectures were really helpful – you get an idea of what it might be like at uni,” commented Songul, from London. “…though they might be making a special effort to make them really good ones!”

Queens’ College and the Scott Polar Research Institute hosted the final day of the half-term programme, Science and Environment Day. The event included a session on the work of the British Antarctic Survey, which is based in Cambridge.

All three of the days included a talk from TK, a current Cambridge student who went into care while still at school.  He spoke on each day about the decisions he had made which brought him to Cambridge, and the ways in which he had found the motivation to work hard on his education.

“When you’re in care, a lot of decisions are made for you,” he told the Realise participants. “For me, university is the way to get my independence. It’s about standing on my own two feet and making my own decisions.”

“It was good to get a care leaver perspective,” said Alex, who came from Suffolk for Natural Sciences Day. “It’s helpful to hear from someone who’s been in that situation.”

Sherelle, also from London, also found TK’s talk encouraging. “TK’s talk was inspirational,” she said. “It’s something everyone can learn from. We can all take away something from it.”

“I am thinking about university, and about applying to Cambridge,” she added. “Getting to come here and experience what it is like has been really helpful – a full-on view of what it is like!”

The Cambridge Colleges play an important role in the success of Realise. By hosting part of each day, talking about university admissions, and offering tours of college rooms, led by current students, they offer a behind-the-scenes look at university life and a chance to ask questions informally.

“The chats that we had at the start were very good,” said Allanah, 16, from Marlow. “It was views of the college and university from the students themselves.

“I was surprised to hear about the funding which is available and the help and pastoral support that you have at the university. I did not know much about Cambridge but wanted to go to university, so this has helped me look at Cambridge.”

Allanah’s foster carer Lynne found the day a helpful insight into the realities of Cambridge “The whole day has really changed our assumptions and lifted expectations,” she said. “It is very easy to think that Cambridge is for the elite but that has been completely myth-busted. I will do everything I can to get Allanah here - but if not here then any university she wishes will be equally as good.”

Realise could not happen without the support of foster carers and local authority education teams, who give up their time to accompany younger participants.

“I want to have as many of my looked-after children to access as many of the University of Cambridge Realise Events as possible,” Elle said. “I want them to know that they can access Higher Education and can have a university place if they want.
“Realise is about opening their eyes to higher education choices, improving their options and making it an expectation that university can be something for them.”

“I see a difference each time we come. When I am driving back with them in the car they say ‘I fancy going to university now Elle’. Even if it’s not Cambridge it means a lot that they are thinking like that.” 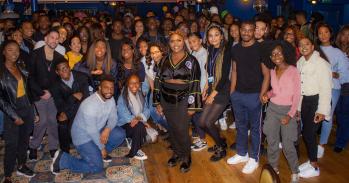 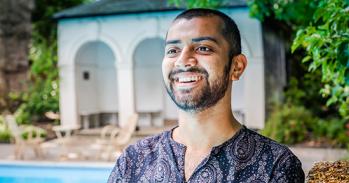