‘Get In Cambridge’, a programme that encourages students from under-represented ethnic minority backgrounds to come to Cambridge, has almost doubled in size this year.  The programme aims to break down barriers around perception and finance through outreach activities and financial support for undergraduates and Master’s students.

Undergraduates receive an annual Get In award to ensure they can make the most out of Cambridge life, and Master’s students receive a Studentship, managed by the Cambridge Trust, to enable them to take up their offer at Cambridge. To date 82 students have received Get In studentships and awards.

Ultimately, Get In aims to support every socio-economically disadvantaged Master’s and undergraduate student from an under-represented ethnic minority background. While there is still some way to go, the expansion of the initiative has enabled many more under-represented students to receive support. Get In has been entirely funded through generous donations from individuals.

Cambridge alumnus Supraj Rajagopalan recently donated £1 million to Get In, the largest contribution to date. His generosity has almost doubled the number of Get In Cambridge recipients from 30 in 2021 to 52 in 2022.

“Get In Cambridge is a fantastic and inspirational programme that I'm pleased to support," he commented. "Its scope of encouraging applications, as well as supporting students when they're here, is key to helping address systemic disadvantage both before and during their Cambridge experience. My Cambridge experience was transformative, and I believe in giving back to benefit future generations. I was exposed to incredible role models across Cambridge, and I believe the Get In programme offers today's students a wide range of role models at all levels — fellow students, College and University leaders, and alumni."

"We are incredibly grateful for such generosity from donors to Get In Cambridge, which represents a significant contribution to our continued efforts to address the under-representation of ethnic minority communities amongst our student community. Thanks to the support that we have received, we have been able to almost double the number of awards allocated. We are particularly pleased that we have been able to support students who are keen to continue their academic journeys to postgraduate level, with studentships for Master's students, as this is increasingly becoming the 'broken' pipeline in terms of financial support for students who wish to progress to higher degrees."

Of the 52 students who became part of the Get In community this year, 12 are studying for Master’s and 40 are undergraduates. The awards have had a transformational effect. Ahmad Hayat, from Newcastle, is studying for a Master’s in Law. He says:

“As a British Pakistani student, I have to admit that I was initially intimidated by the idea of studying at Cambridge. I had always assumed that it was a place for elite members of society and I wasn't sure if I belonged here. However, the Get In Cambridge studentship that I received has helped me to continue my journey through higher education and has given me the opportunity to prove to myself that I am capable of achieving my goals. Financially, it has made the course much more manageable, allowing me to focus on my studies without having to worry about the financial burden. It has also made a significant difference to my experiences in Cambridge as it has allowed me to take advantage of various extracurricular activities that I may not have otherwise been able to do.”

Get In Cambridge launched in 2019 as a targeted outreach and social media campaign to reach potential applicants from under-represented ethnic minority groups. The campaigns have reached millions of prospective applicants and won a number of prestigious social media awards. Since 2019, Cambridge has also seen a significant increase of the proportion of students from under-represented backgrounds successfully applying, in no small part due to the financial provision available from Get In Cambridge. 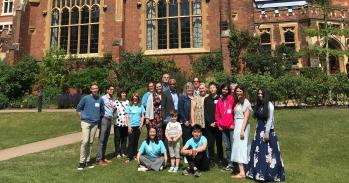 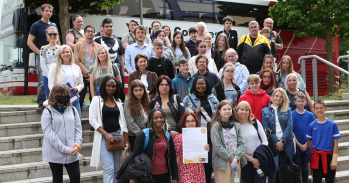 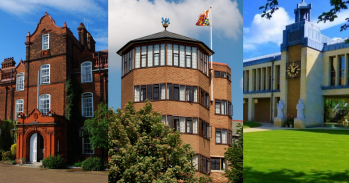 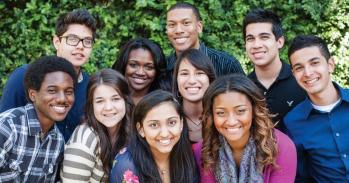 Bhaskar Vira attending a Get In reception