Tiny coffin excavated at Giza in 1907 is remarkable evidence of importance placed on official burial rituals in ancient Egypt.

A miniature ancient Egyptian coffin measuring just 44cm in length has been found to contain the youngest ever example of a human foetus to be embalmed and buried in Egyptian society. This discovery is the only academically verified specimen to exist at only sixteen to eighteen weeks of gestation.

This landmark discovery from the Fitzwilliam Museum in Cambridge, is remarkable evidence of the importance that was placed on official burial rituals in ancient Egypt, even for those lives that were lost so early on in their existence. Curators at the Fitzwilliam made the discovery, during their research for the pioneering bicentennial exhibition Death on the Nile: Uncovering the afterlife of ancient Egypt.

The tiny coffin was excavated at Giza in 1907 by the British School of Archaeology and came into the collection at the Fitzwilliam Museum the same year. It is a perfect miniature example of a wooden coffin of the ancient Egyptian ‘Late Period’ and may date to around 664-525 BC. The lid and box are both made from cedar wood. Although the coffin is deteriorated, it is clear that the wood was carefully carved on a painstakingly small scale and decorated. This gave the curators at the Fitzwilliam the first very clear indication of the importance given to the coffin’s contents at this time in ancient Egyptian society.

The diminutive wrapped package inside was carefully bound in bandages, over which molten black resin had been poured before the coffin was closed. For many years it was thought that the contents were the mummified remains of internal organs that were routinely removed during the embalming of bodies.

Examination using X-ray imaging at the Fitzwilliam Museum was inconclusive, but suggested that it may contain a small skeleton. It was therefore decided to micro CT (computed tomography) scan the tiny bundle at Cambridge University’s Department of Zoology. The cross-sectional images this produced gave the first pictures of the remains of a tiny human body held within the wrappings, which remain undisturbed.

Five digits on both hands and feet and the long bones of the legs and arms were all clearly visible. Although the soft skull and pelvis were found to be collapsed the categorical consensus was that inside the bundle was a human foetus estimated to be of no more than eighteen weeks gestation. It was impossible to give a gender to the specimen and it is thought that the foetus was probably the result of a miscarriage, as there were no obvious abnormalities to explain why it could not have been carried to full-term.

From the micro CT scan it is noticeable that the foetus has its arms crossed over its chest. This, coupled with the intricacy of the tiny coffin and its decoration, are clear indications of the importance and time given to this burial in Egyptian society.

"CT imaging has been used successfully by the museum for several projects in recent years, but this is our most successful find so far," Dr. Tom Turmezei explained. "The ability of CT to show the inner workings of such artefacts without causing any structural damage proved even more invaluable in this case, allowing us to review the foetus for abnormalities and attempt to age it as accurately as possible."

Julie Dawson, Head of Conservation at the Fitzwilliam Museum said, "Using non-invasive modern technology to investigate this extraordinary archaeological find has provided us with striking evidence of how an unborn child might be viewed in ancient Egyptian society. The care taken in the preparation of this burial clearly demonstrates the value placed on life even in the first weeks of its inception."

Tutankhamun’s tomb contained two small foetuses that had been mummified and placed in individual coffins, but these infants were both significantly more developed, at about 25 weeks and 37 weeks into gestation. Very few other examples of burials of miscarried babies have so far been identified from ancient Egypt.

The miniature coffin is currently on display as part of the exhibition Death on the Nile: Uncovering the Afterlife of ancient Egypt until 22nd May 2016 at the Fitzwilliam Museum Cambridge. 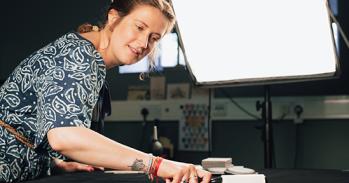 The photographer sharing the secrets of rare manuscripts