An early example of fake news has been found in the 3000-year-old Babylonian story of Noah and the Ark, which is widely believed to have inspired the Biblical tale. Nine lines etched on ancient clay tablets that tell the Gilgamesh Flood story can now be understood in very different ways – according to a Cambridge academic.

Ea’s message seems to promise a rain of food, its hidden meaning warns of the Flood... It may be the earliest ever example of fake news

Dr Martin Worthington’s new research analysing the word play in the story has uncovered the duplicitous language of a Babylonian god called Ea, who was motivated by self-interest.

Dr Worthington, a Fellow of St John’s College, University of Cambridge, said: “Ea tricks humanity by spreading fake news. He tells the Babylonian Noah, known as Uta–napishti, to promise his people that food will rain from the sky if they help him build the ark. What the people don’t realise is that Ea’s nine-line message is a trick: it is a sequence of sounds that can be understood in radically different ways, like English ‘ice cream’ and ‘I scream’.

“While Ea’s message seems to promise a rain of food, its hidden meaning warns of the Flood.  Once the ark is built, Uta–napishti and his family clamber aboard and survive with a menagerie of animals. Everyone else drowns.  With this early episode, set in mythological time, the manipulation of information and language has begun. It may be the earliest ever example of fake news.”

The Gilgamesh Flood story is known from clay tablets that date back around three thousand years.

Dr Worthington is an Assyriologist who specialises in Babylonian, Assyrian and Sumerian grammar, literature and medicine. In his new book launched today (November 26) titled Ea’s Duplicity in the Gilgamesh Flood story, he explores the tricks of ‘wily Ea’, who is also known as the ‘crafty god’ and the ‘trickster god’. This research focuses on nine lines in the 3000-year-old story which can be interpreted in contradictory ways.

Dr Worthington explains:  “Ea’s lines are a verbal trick which can be understood in different ways which are phonetically identical. Besides the obvious positive reading promising food, I found multiple negative ones which warn of the impending catastrophe. Ea is clearly a master wordsmith who is able to compress multiple simultaneous meanings into one duplicitous utterance.”

The Flood Tablet in the British Museum, which bears part of the Gilgamesh Flood story, is probably the world’s most famous clay tablet, and caused a global sensation when its significance was first discovered by Assyriologist George Smith in 1872.

Smith realised this tablet told the same story as Noah and the Ark in the Biblical book of Genesis. Although there were more gods involved than in Genesis, and the Babylonian hero had a different name, the two stories were recognisably the same, with animals taken aboard the ark before the flood and birds sent out at the end once the rain stopped.

Since Smith’s discovery many more clay tablets of the Babylonian flood story have come to light and academics are still analysing the meaning of stories in the ancient language that has not been spoken for 2000 years.

But why would a god lie in the Gilgamesh Flood story?

Dr Worthington explained: “Babylonian gods only survive because people feed them. If humanity had been wiped out, the gods would have starved.  The god Ea manipulates language and misleads people into doing his will because it serves his self-interest. Modern parallels are legion!”

Ea’s Duplicity in the Gilgamesh Flood story, published by Routledge, will be launched tonight (November 26) in London.

At dawn there will be cakes

Two of the nine lines from the flood story in Babylonian are:

At dawn there will be kukku-cakes,

in the evening he will rain down upon you a shower of wheat.

By means of incantations,

by means of wind-demons, he will rain down upon you rain as thick as (grains of) wheat.

At dawn, he will rain down upon you darkness,

(then) in (this) pre-nocturnal twilight he will rain down upon you rain as thick as (grains of) wheat. 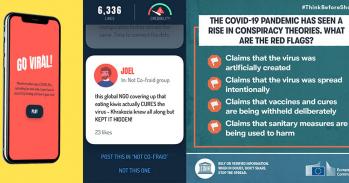 The Adda Seal featuring the god Ea second from the right

Credit: The Trustees of the British Museum