The Magna Carta of scientific maps

One of the most important maps of the UK ever made – described as the ‘Magna Carta of geology’ – is to go on permanent public display in Cambridge after being restored to its former glory.

This is the world’s earliest geological map.

William Smith’s 1815 Geological Map of England and Wales, which measures 8.5ft x 6ft, demonstrated for the first time the geology of the UK and was the culmination of years of work by Smith, who was shunned by the scientific community for many years and ended up in debtors’ prison.

Today, exactly 200 years since its first publication, a copy of Smith’s map – rediscovered after more than a century in a museum box – will go on public display at the Sedgwick Museum of Earth Sciences. Aside from a copy held at The Geological Society in London, the Cambridge map is believed to be the only such map on public display anywhere in the world.

The iconic map, which is still used as the basis of geological maps to this day, had the greatest influence on the science of geology, inspiring a generation of naturalists and fledgling geologists to establish geology as a coherent, robust and important science. The map was so large, that, for practicality's sake, it was often sold in 15 separate sheets, either loose, or in a leather travelling case.

Museum Director Ken McNamara said: “This is the world’s earliest geological map. Smith was working from a position of no knowledge when he began. Nobody had ever attempted this before and it’s really quite staggering what this one man achieved over ten or fifteen years, travelling up and down the country as a canal surveyor.

“It’s incredibly accurate, even now in 2015. If you compare the current geological map of Great Britain today there are amazing similarities. The British Geological Survey still uses the same colour scheme that Smith devised. Chalk is green. Limestone is yellow and it’s still done like that to this day.”

Smith’s map proudly announced itself to the world as: "A DELINEATION of the STRATA of ENGLAND and WALES with part of SCOTLAND; exhibiting the COLLIERIES and MINES; the MARSHES and FEN LANDS ORIGINALLY OVERFLOWED BY THE SEA; and the VARIETIES of Soil according to the Variations in the Substrata; ILLUSTRATED by the MOST DESCRIPTIVE NAMES".

How many of Smith's great maps still exist is unclear. Around 70 are thought to remain worldwide. The Sedgwick Museum of Earth Sciences at the University of Cambridge, the oldest geological museum in the world, is lucky enough to have three copies.

For many years the museum knew that it possessed two of Smith's great maps: one a set of 15 sheets bound together as a book; the other, beautifully preserved, nestles in its leather travelling case. Two years ago, in May 2013, a third copy was rediscovered in the collection. Found folded in a box with some other early geological maps, staff believe it had not seen the light of day since Queen Victoria was on the throne.

Close up detail from the Smith map 1 of 7

Close up detail from the Smith map 2 of 7

Key to the geological classifications on the map 3 of 7

Close up detail from the Smith map 4 of 7

Full-length shot of the map 6 of 7

Detail from the Smith map 7 of 7

Despite its decades hidden from view, the hand-coloured map had been exposed to harsh light for many years before being packed away. The colours were faded, the paper stained and it carried the stains of faecal deposits from long dead spiders and flies.

The map was then conserved by experts at Duxford, near Cambridge. Nineteenth century dirt and grime was carefully removed, then the original, faded water-colour paint was given a protective coating and subtly restored to enhance the colour of the rock formations. Only 400 were ever produced over at least a four-year period. During that time, Smith continued his geological research and continually made new discoveries, adapting and amending each new edition as he went along. Each individual map took seven or eight days to be coloured.

McNamara said: “Smith suffered many deprivations in his life. He became a bankrupt and ended up in debtor's prison for a while. Perhaps, almost as galling, he was largely ignored by the geological establishment. However, he gained his due recognition from the Geological Society of London later in life when, in 1831, he was the first person to receive the society's most prestigious medal, the Wollaston Medal.

“Appropriately, given the hanging of his map in the Sedgwick Museum, it was Adam Sedgwick who presented Smith with his medal. We are, we think, the only museum, library or art gallery in the world to have one of Smith’s legendary maps on public display – and we want as many people as possible to come and see this enormous, iconic and beautiful map for themselves.” 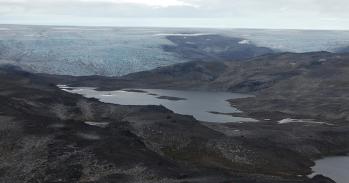