Cambridge scientists at the Large Hadron Collider (LHC) at CERN, near Geneva, have spotted one of the rarest particle decays ever seen in nature.

An observation of this very rare decay is a key result that is putting our Supersymmetry theory colleagues in a spin. Results of this quality rely on the dedication and enthusiasm of research post-docs who analyse the data as it pours from the experiment

The result is very damaging to new theories like the extremely popular Supersymmetry.

Current knowledge about the most fundamental matter particles (quarks and leptons, such as an electron) and the forces between them is embedded in the so-called Standard Model. The particle masses are a consequence of their interactions with the Higgs field. Exciting the Higgs field in particle collisions at the LHC recently resulted in the discovery of the Higgs boson.

However, the Standard Model is not the ultimate theory; it does not include gravity nor explain 95% of the Universe, which is in the form of Dark Matter and Dark Energy.

Supersymmetry is called in to fill some of the gaps of the Standard Model. Since it predicts new phenomena, the theory of Supersymmetry can be thoroughly tested at the LHC. A very good place to search is through the decay of a Bs particle (composed of a beauty quark and a strange anti-quark) into two muons (very heavy electrons). It is expected to be a very rare event but can be greatly enhanced be the presence of new physics.

This decay has been observed for the first time by a team at the LHC beauty (LHCb) experiment, a gigantic particle detector at one of the collision points on the 27 km LHC collider.

The LHC, the world’s most powerful particle accelerator ever built, has been accelerating protons to almost the speed of light and bringing them to collision since November 2009. Each collision produces a shower of particles, among which a Bs particle is occasionally present. The Bs particle is not stable and decays an instant (within a million millionth of a second) after its production. During its short lifetime, it travels far enough (approximately a centimetre) to be observed by the LHCb detector. It can decay in a variety of other particles and in an extremely rare occurrence, about one in 300 million chance, into two muons.

The team of physicists has analysed the tremendous amount of collisions recorded by LHCb, searching for this decay. In the end, they have spotted a handful of likely candidates. Observing this ultra-rare decay is a triumph for LHCb.

Professor Val Gibson, leader of the Cambridge LHCb team, says “An observation of this very rare decay is a key result that is putting our Supersymmetry theory colleagues in a spin. Results of this quality rely on the dedication and enthusiasm of research post-docs who analyse the data as it pours from the experiment”

The observation is bang on the Standard Model prediction, but comes as very bad news for supporters of Supersymmetry. Indeed, new physics failed to show up where it had the best opportunity. “If new physics exists, then it is hiding very well behind the Standard Model” commented Cambridge physicist Dr Marc-Olivier Bettler, a member of the analysis team.

Nevertheless, Supersymmetry also benefits from this measurement, as Dr Bettler explains “This result is important because it tells us what new physics is not.” 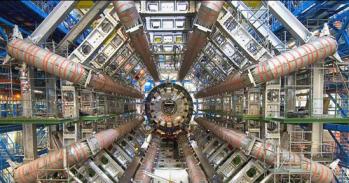