Best-known for his treatment of shell-shock victims in World War I, a new study examines William Rivers’ crucial, but often overlooked contributions to the study of human culture – revealing how, late in his career, they led him to believe that society as a whole could suffer from “shell-shock”.

Rivers seems to have believed that the psychic equilibrium of Melanesians had become unbalanced. In their own way, they were victims of a form of post-traumatic stress disorder, somewhat parallel to the British soldiers who became victims of shell-shock.

Thanks in no small part to the Regeneration trilogy by Pat Barker, which dramatized his work, William Halse Rivers is best known to history as the man who pioneered humane treatments for shell-shocked British officers during World War I, striking up a lifelong friendship with the poet Siegfried Sassoon.

Six years earlier, however, the Cambridge polymath had rewritten the script of an entirely different discipline. Working in the Solomon Islands alongside a fellow-researcher, Arthur Hocart, Rivers transformed the study of human society, helping to establish the modern field of social anthropology.

Yet despite its foundational importance, the work has remained little-studied or known – partly because subsequent academics wrote it out of history in the course of laying claim to similar ideas. Now, a new book about the 1908 Solomon Islands expedition is attempting to correct that, revisiting the anthropological work of Rivers in Island Melanesia, and examining the impact of these half-forgotten contributions by a man better remembered for his compassionate treatment of soldiers who had been traumatised on the Western Front.

It also reveals the fascinating possibility that, as he revisited this earlier research after the war, Rivers’ upsetting experiences working with soldiers suffering from post-traumatic stress disorder bled into his work in the Solomons. At the time of his death, in 1922, he may have believed that society itself could be affected by a type of “shell-shock”, and that this had devastated indigenous populations in the Pacific.

The book, The Ethnographic Experiment: AM Hocart and WHR Rivers in Island Melanesia, 1908, features contributions from current researchers who, following Rivers’ and Hocart’s lead, have since carried out their own fieldwork in Melanesia. It will be launched on November 4 at St John’s College, University of Cambridge, where Rivers himself was a Fellow.

Tim Bayliss-Smith, Professor of Pacific Geography, and a contributor to the book said: “One of the reasons that Rivers was unusual was that he did so many things. He was a medic, psychologist, anthropologist, and famously served in the Royal Army Medical Corps. People have tended to look at those three careers from separate points of view, but it may not actually be possible to separate them completely.”

“Modern anthropology is often seen as having begun in the 1920s, when researchers pioneered an approach to studying societies that involved immersing themselves in the culture they were looking at, learning the language, participating and observing. But a lot of that was attempted, and to some extent achieved, by Rivers and Hocart in 1908, working with Solomon Islanders. What they recorded and did provided inspiration for a lot of anthropologists who have come since.”

Born in 1864, William Rivers originally trained in medical science, but gradually he became interested in the emerging fields of neurology and psychology – especially sensory phenomena and mental states.

At the same time, he also began to take an interest in the study of human society and culture. It was this that took him to the Torres Straits islands in 1898 and then to Melanesia in 1908, where he and Hocart sought to examine what now seems an archaic idea – that human societies had “evolved” through several stages of development and that the indigenous peoples of the British-controlled Solomon Islands, supposedly at an earlier stage, would display examples of the transition from a matrilineal to a patrilineal social organisation.

Although the expedition sprang from what is now an outdated hypothesis, the method the two used was, in the eyes of the new book’s authors, modern “anthropology in the making”.

Working on the small island of Simbo, the researchers pioneered what is now known as “participant observation”, living among the local people, and immersing themselves in their culture and everyday lives. Within the emerging social sciences this had not been done before, and it marked a turning point in the way in which Western thinkers attempted to understand societies their predecessors had considered exotic, remote, primitive and savage.

Because it was smaller and less well-documented than later, similar research, the six-month experiment was largely forgotten. Rivers and Hocart parted ways immediately after, and World War I found Rivers undertaking what became far more famous work at the military psychiatric hospital at Craiglockhart in Edinburgh, where he treated British officers who were suffering from shell-shock. 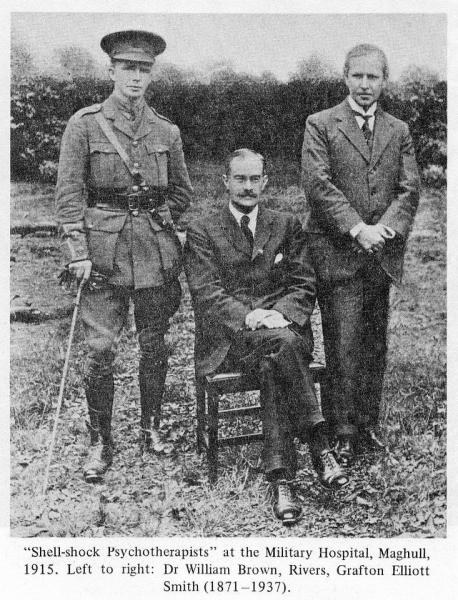 Deviating from standard approaches such as electric shock treatment, Rivers instead pioneered what a “talking cure”, which relied on encouraging patients to discuss their experiences and emotions. His work with Sassoon later provided much of the inspiration for Pat Barker’s 1991 novel, Regeneration.

The new study suggests that some of this work may have stemmed from Rivers’ experiences in the Solomons, where he witnessed indigenous “healers” curing traumatised people through discussion and suggestion in a similar way.

Perhaps more strikingly, however, Bayliss-Smith suggests that Rivers’ wartime psychiatric contribution may have subsequently blended with his thoughts about Melanesia. Returning to Cambridge after the war, he appears to have begun to form the view that societies could suffer the same sort of post-traumatic stress as he had witnessed in soldiers. When he suddenly died in 1922, Rivers may have been close to diagnosing this societal “shell-shock” in Melanesia.

The basis for this appears to have been genealogical information, which Rivers had compiled in 1908, and which showed that the indigenous population of the Solomon Islands had declined because of low fertility rates after the coming of British colonial power. After the war, he seems to have begun to theorise that the British Empire’s arrival delivered a destabilising psychological blow to Melanesian society that equated, on a much larger scale, to that experienced by individual soldiers in the trenches, and left it unable to function normally.

In particular, he argued that it had left women reluctant to conceive, eager to secure abortions and neglectful of their children. “The people say to themselves, ‘Why should we bring children into the world only to work for the white man?’” Rivers wrote. “Measures which, before the coming of the European, were used chiefly to prevent illegitimacy have become the instrument of racial suicide.”

Bayliss-Smith suggests that Rivers’ emerging ideas about colonialism as shell-shock were a work in progress, interrupted by his sudden death in 1922. “Rivers seems to have believed that the psychic equilibrium of Melanesians had become unbalanced,” he said. “In their own way, Simbo Islanders were victims of a form of post-traumatic stress disorder, and their case was somewhat parallel to the British soldiers and airmen who survived the mass slaughter of the First World War, only to become victims of shell-shock.”

“Historical demographers today place far more emphasis on the insidious impacts of introduced disease in the Pacific islands. It is ironic that Rivers, the medical doctor, almost completely overlooked disease, a reflection perhaps of his new mindset following the traumas of World War I.”

The Ethnographic Experiment: AM Hocart and WHR Rivers in Island Melanesia, 1908 is published by Berghahn Books. The book will be launched at an event at St John’s College, Cambridge, on November 4.

Detail from a portrait of William Halse Rivers in his Royal Army Medical Corps uniform.