Package tour to Mecca? How the Hajj became an essential part of the British calendar

This week, millions of Muslims make the annual pilgrimage to Mecca known as the Hajj. A new study reveals how, in the age of Empire, the spiritual journey became a major feature of British imperial culture, attracting the interest of Queen Victoria, Winston Churchill and others – and resulting in one of the earliest Thomas Cook package tours.

Britain ended up facilitating the pilgrimage in an ultimately futile attempt to gain legitimacy among its Muslim subjects. Inadvertently, it ended up acting like a Muslim power.

Modern customers are more likely to book seven nights in Tenerife or a last-minute deal in the Algarve, but back in the 19th century, Thomas Cook’s premier package tour was a pilgrimage to Mecca.

In the 1880s, Britain’s colonial Government in India found itself under fire. With more of its Muslim subjects than ever before travelling to the Arabian Holy City to perform the annual pilgrimage known as the Hajj, concern about the exploitation and insanitary conditions that the journey often involved had reached breaking point.

Facing media outrage, the British authorities decided to call in the professionals. Thomas Cook & Son, the original package holiday entrepreneurs, were approached – and promptly became the official travel agents for the Hajj, the fifth pillar of Islam.

The story is one of many captured in a new study of Britain’s relationship with the Hajj during the age of Empire, written by Dr John Slight, from the Faculty of History and a Research Fellow at St John’s College, University of Cambridge. Contrary to its remote, even exotic image, he argues that the pilgrimage, which millions of Muslims are undertaking from September 20 – 25 this year, was  a matter of major British concern. Leading historical figures, and the general public, became fascinated by the ritual, as the business of running a vast Empire impelled Britain to behave as if it was a Muslim power in its own right. 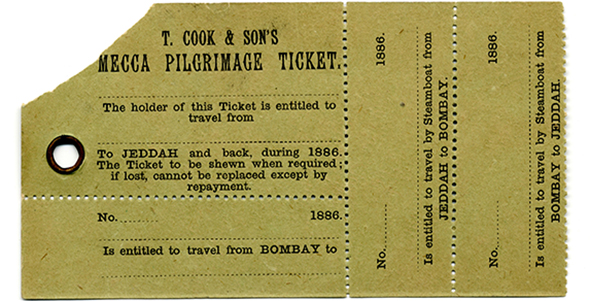 The book reveals that Queen Victoria, King George V, Lord Kitchener, Lawrence of Arabia and Winston Churchill all took an active interest in the Hajj, debated its management, and pencilled it into their calendars. The pilgrimage even made its way into a Sherlock Holmes adventure, a Joseph Conrad novel, and inspired Britons across the Empire to convert to Islam.

Britain’s relationship with the Hajj is a topic that has not been fully studied by historians before. Slight’s research covered a period from 1865, when a cholera outbreak forced Britain to manage the Hajj more pro-actively, to 1956, when the Suez Crisis significantly reduced its capacity to do so.

For most of that time, Britain ruled over approximately half of the world’s Muslims, across an area that stretched from West Africa to Southeast Asia. In global terms, the Empire’s first religion was Islam, and the Empire contained more Muslims than any other religious group.

As a result, the Hajj – a mandatory religious act that must be carried out at least once in the lifetimes of all adult Muslims capable of doing so – became a British question. Churchill himself observed in a 1920 memo to the British Cabinet: “We are the greatest Mohammedan power in the world. It is our duty to study policies which are in harmony with Mohammedan feeling.”

Slight’s research reveals that Britain’s stewardship of the Hajj started with controls to prevent disease, but soon expanded into a full-blown bureaucracy. By the mid-to-late 19th century, the British authorities were increasingly obliged to manage the pilgrimage so as to be seen as a friend and protector of Islam.

“It was one of the most significant unintended consequences of Britain’s rule over a large part of the Islamic world,” Slight said. “Britain ended up facilitating the pilgrimage in an ultimately futile attempt to gain legitimacy among its Muslim subjects. Inadvertently, it ended up acting like a Muslim power.”

Slight found that a preoccupation with the Hajj went right to the top of the British State. Queen Victoria took a personal interest, for instance, after meeting some South African pilgrims. In 1898 she exhorted the British ambassador in Istanbul to urge the Ottoman Sultan, who controlled Mecca, to address the ill-treatment of British Muslim subjects who were performing their sacred duty.

Later, amid war with the Ottomans in 1915, Lord Kitchener stressed to the British War Committee the need to secure the “Mahommedan Holy Places” and with them British prestige in the eyes of its Muslim subjects. King George V also devised a scheme to arrange for Indian Muslim soldiers to perform Hajj on their way home after the First World War, intended to be a PR triumph, but the scheme had mixed results when the participants got into fights with the local Bedouins.

Thomas Cook was called in by the Government in 1886, after a scandal surrounding the near-sinking of a pilgrim ship that made the front page of The Times. The firm was given a contract to arrange tickets, train journeys, ships and other logistics enabling Muslims living in India, as subjects of the British Crown, to perform Hajj. 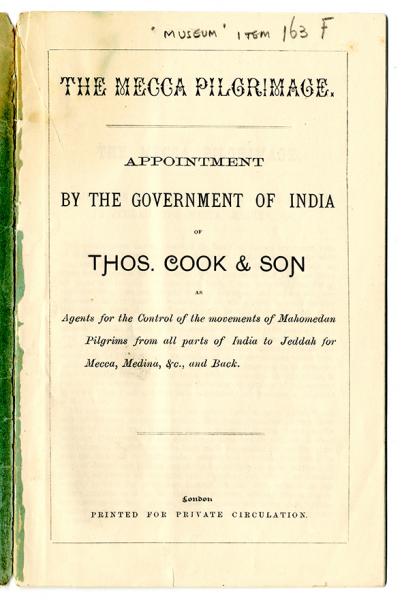 His comments reflect one of Slight’s major findings, which concerns the little-studied, hundreds of thousands of destitute, “pauper” pilgrims, who made Hajj. Barely able to go in the first place, many of these people ran out of money by the time they reached Mecca and were stranded at the nearby port of Jeddah. Repatriating them proved an ongoing problem for the Empire and, Slight says, illustrates the limits of its power.

By the First World War, Britain was essentially underwriting the cost of taking these pilgrims home, at great expense. A system of IOU forms was attempted, but reclaiming the outlay frequently proved a forlorn hope. Slight’s search through the archives revealed that many illiterate pilgrims signed with thumb prints, others gave false names, or even fabricated the name of the village where they lived. The IOUs were rarely repaid.

The plight of poor pilgrims also hastened efforts to employ more Muslims, capable of handling their needs, in the Hajj bureaucracy. By 1887, Bombay had its own Pilgrim Department, staffed by Muslims, and run by a Muslim “protector of pilgrims”.  By the 1930s, the British consulate at Jeddah was so reliant on Muslim staff that the consul remarked that he never saw much of the pilgrimage at all.

“We have the idea that the British Empire was run through some sort of top-down imposition of power, but in fact it was a very haphazard enterprise,” Slight said. “Instead of an image of British officials in their pith helmets dispensing justice to colonial subjects, this is a story where the main actors on both sides were Muslims, who to some extent shaped Imperial policy.”

One effect of Britain’s role as a “Muslim power” was that other Britons were inspired to perform Hajj or convert to Islam. The most famous was the Victorian explorer, Richard Burton, who travelled to Mecca, which was out-of-bounds to non-Muslims, disguised as an Afghan physician. Arthur Hamilton, also known as “Hajji Hamilton”, was director of the Political Intelligence Bureau in British Malaya and who went in 1927, is one of several eminent converts also recorded in the book.

Following the events in Mecca on Thursday 24th September, Dr John Slight discussed the complexity of managing the mass ritual in an article for the Independent. You can read the article here: http://www.independent.co.uk/voices/comment/hajj-stampede-managing-this-...

Pilgrims at the Masjid al-Haram on Hajj in 2008