New technique for ‘seeing’ ions at work in a supercapacitor

A new technique which enables researchers to visualise the activity of individual ions inside battery-like devices called supercapacitors, could enable greater control over their properties and improve their performance in high-power applications.

Being able to see what’s going on inside these devices will help us to control their properties, which could help to make them smaller and cheaper

Researchers from the University of Cambridge, together with French collaborators based in Toulouse, have developed a new method to see inside battery-like devices known as supercapacitors at the atomic level. The new method could be used in order to optimise and improve the devices for real-world applications, including electric cars, where they can be used alongside batteries to enhance a vehicle’s performance.

By using a combination of nuclear magnetic resonance (NMR) spectroscopy and tiny scales sensitive enough to detect changes in mass of a millionth of a gram, the researchers were able to visualise how ions move around in a supercapacitor. They found that while charging, different processes are at work in the two identical pieces of carbon ‘sponge’ which function as the electrodes in these devices, in contrast to earlier computer simulations. The results are published today (22 June) in the journal Nature Materials.

Supercapacitors are used in applications where quick charging and power delivery are important, such as regenerative braking in trains and buses, elevators and cranes. They are also used in flashes in mobile phones and as a complementary technology to batteries in order to boost performance. For example, when placed alongside a battery in an electric car, a supercapacitor is useful when a short burst of power is required, such as when overtaking another car, with the battery providing the steady power for highway driving.

“Supercapacitors perform a similar function to batteries but at a much higher power – they charge and discharge very quickly,” said Dr John Griffin, a postdoctoral researcher in the Department of Chemistry, and the paper’s lead author. “They’re much better at absorbing charge than batteries, but since they have much lower density, they hold far less of that charge, so they’re not yet a viable alternative for many applications. Being able to see what’s going on inside these devices will help us to control their properties, which could help to make them smaller and cheaper, and that might make them a high-power alternative to batteries.”

The reason why supercapacitors charge and discharge so much faster is that the ‘sticking’ and ‘hopping’ processes happen much faster than the chemical reactions at work in a battery.

“To increase the area for ions to stick to, we fill the carbon electrode with tiny holes, like a carbon sponge,” said Griffin. “But it’s hard to know what the ions are doing inside the holes within the electrode – we don’t know exactly what happens when they interact with the surface.”

In the new study, the researchers used NMR to look inside functioning supercapacitor devices to see how they charge and store energy. They also used a type of tiny weighing scale called an electrochemical quartz crystal microbalance (EQCM) to measure changes in mass as little as a millionth of a gram.

By taking the two sets of information and putting them together, the researchers were able to build a precise picture of what happens inside a supercapacitor while it charges.

“In a battery, the two electrodes are different materials, so different processes are at work,” said Griffin. “In a supercapacitor, the two electrodes are made of the same porous carbon sponge, so you’d think the same process would take place at both – but it turns out the charge storage process in real devices is more complicated than we previously thought. Previous theories had been made by computer simulations – no-one’s observed this in ‘real life’ before.”

Additionally, the EQCM was used to detect tiny changes in the weight of the electrode as ions enter and leave. This enabled the researchers to show that solvent molecules also accompany the ions into the electrode as it charges.

“We can now accurately count the number of ions involved in the charge storage process and see in detail exactly how the energy is stored,” said Griffin. “In the future we can look at how changing the size of the holes in the electrode and the ion properties changes the charging mechanism. This way, we can tailor the properties of both components to maximise the amount of energy that is stored.”

The next step, said Professor Clare P. Grey, the senior author on the paper, “is to use this new approach to understand why different ions behave differently on charging, an ultimately design systems with much higher capacitances.” 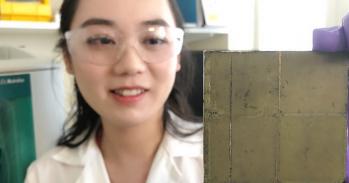