Scientists at the University of Cambridge and the Wellcome Trust Sanger Institute have created a new technique that simplifies the production of human brain and muscle cells - allowing millions of functional cells to be generated in just a few days. The results published today in Stem Cell Reports open the door to producing a diversity of new cell types that could not be made before in order to study disease.

Human pluripotent stem cells are ‘master cells’ that have the ability to develop into almost any type of tissue, including brain cells. They hold huge potential for studying human development and the impact of diseases, including cancer, Alzheimer’s, multiple sclerosis, and heart disease.

In a human, it takes nine to twelve months for a single brain cell to develop fully. It can take between three and 20 weeks using current methods to create human brain cells, including grey matter (neurons) and white matter (oligodendrocytes) from an induced pluripotent stem cell – that is, a stem cell generated by reprogramming a skin cell to its ‘master’ stage. However, these methods are complex and time-consuming, often producing a mixed population of cells.

The new platform technology, OPTi-OX, optimises the way of switching on genes in human stem cells. Scientists applied OPTi-OX to the production of millions of nearly identical cells in a matter of days. In addition to the neurons, oligodendrocytes, and muscle cells the scientists created in the study, OPTi-OX holds the possibility of generating any cell type at unprecedented purities, in this short timeframe.

To produce the neurons, oligodendrocytes, and muscle cells, the team altered the DNA in the stem cells. By switching on carefully selected genes, they reprogrammed the stem cells and created a large and nearly pure population of identical cells. The ability to produce as many cells as desired combined with the speed of the development gives an advantage over other methods. The new method opens the door to drug discovery, and potentially therapeutic applications in which large amounts of cells are needed.

Study author Professor Ludovic Vallier from the Wellcome Trust-Medical Research Centre Stem Cell Institute at the University of Cambridge says: “What is really exciting is we only needed to change a few ingredients – transcription factors – to produce the exact cells we wanted in less than a week. We over-expressed factors that make stem cells directly convert into the desired cells, thereby bypassing development and shortening the process to just a few days.”

OPTi-OX has applications in various projects, including the possibility to generate new cell types which may be uncovered by the Human Cell Atlas. The ability to produce human cells so quickly means the new method will facilitate more research.

Joint first author, Daniel Ortmann from the University of Cambridge, adds: “When we receive a wealth of new information on the discovery of new cells from large scale projects, like the Human Cell Atlas, it means we’ll be able to apply this method to produce any cell type in the body, but in a dish.”

Dr Mark Kotter, lead author and clinician, also from Cambridge, says: “Neurons produced in this study are already being used to understand brain development and function. This method opens the doors to producing all sorts of hard-to-access cells and tissues so we can better our understanding of diseases and the response of these tissues to newly developed therapeutics.”

The research was supported by Wellcome, the Medical Research Council, the German Research Foundation, the British Heart Foundation, The National Institute for Health Research UK and the Qatar Foundation.

Adapted from a press release by the Wellcome Trust Sanger Institute. 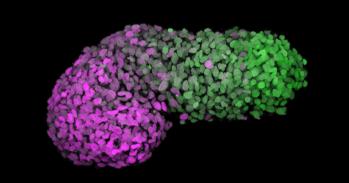