Research for a new book reveals a culturally sanctioned suppression of dialogue around male infertility – despite it being equally as common as female infertility – to the extent that many infertile men receiving treatment still don’t actually consider themselves infertile.

If you promote male infertility as a label to encourage more men to come forward for treatment, you will have a harder time helping them pretend they’re not actually infertile

Even though male infertility is responsible for half of all cases of infertile couples, decades of misogynistic limelight on infertile women has left a ‘categorical hole’ in medical systems, with very few male fertility specialists and no official board certification for practitioners in the US, says a medical sociologist.

Some men seeking treatment end up further damaged by malpractice – prescribed testosterone, for example, which arrests sperm production – resulting from treatment by specialists in the wrong areas, such as a general urologist or their wife’s doctor.

And those that do manage to engage with male infertility specialists are often fed information about their disorder through metaphors that mask infertility – frequently involving traditional male activities such as plumbing, sport or car mechanics – to the point where two thirds of infertile men interviewed for the study simply didn’t consider themselves infertile.

“This is not some kind of deep-seated denial on the part of these men. There is an entire culture and medical system that makes it possible for men to be infertile and not even realise it,” said Dr Liberty Barnes from the ReproSoc group in the Department of Sociology, who has authored the book Conceiving Masculinity based on the research.

Barnes spent over 100 hours shadowing doctors in five clinics in different states right across the US, as well as interviewing many of the couples involved (men and women separately).

Most infertile men, even those who do self-identify as infertile, are able to ‘intellectually reframe’ their infertility issues as a medical condition somehow separate from their self, explains Barnes.

“This separation of body and self, while rare in female infertility, is the standard coping mechanism in men – that their ‘messed-up plumbing’ is not their fault and in most cases repairable.

“Many men cling to the notion that if you have a problem that can be fixed, you don’t have a problem. Instead of telling these men they’re infertile, you hear doctors saying ‘oh, it’s just an issue with your blocked exhaust’.

“The doctors actually provide men with the linguistic strategies to separate body from self.”

Culturally, male fertility is intrinsically bound up with ideas of virility, machismo and sexual potency because it hinges on that very essence of manliness – semen. As William, a businessman in his late thirties interviewed for the research, puts it: “Men should be able to gush sperm all over the place”.

For Barnes, the prevarication around male infertility is symptomatic of widespread cultural nervousness to expose masculinity as in any way fragile. Masculinity is equated with power; protecting and expressing power is a key function of societies and states. In the book, she cites the global media panic around a 1992 study showing sperm counts were dropping.

Male infertility hits masculine identities – from the personal to the national – right where it counts, says Barnes. One interviewee described his desire for fatherhood as “kind of the only purpose of life”. Another said his infertility led him to “doubt the toughness” of his penis.

Consequently, once a man is diagnosed, almost as much effort is taken to socially alleviate this perceived trauma to masculinity as to treat it medically. When interviewed, doctors reeled out a progressive rhetoric. But in the infertility clinics Barnes found a culture designed to enforce gender stereotypes and bolster masculinity. 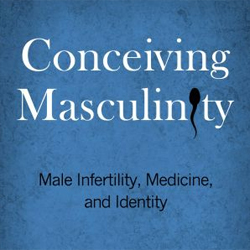 “Every doctor I spoke to and medical seminar I went to, I heard time and again: we’ve got to help society move past archaic ideas that reproduction is women’s work. Then when I was in the clinics, it was complete immersion in traditional gender ideology: penis jokes, talk of balls – everything was power and virility,” said Barnes.

Diagnoses were shrouded in metaphors invoking factories/bridges/engines – technological achievement hiding biological failure. One doctor that Barnes shadowed, when prescribing hormone treatment to boost testosterone, would tell patients that side effects include “the urge to hit a ball really hard or drive really fast”. Barnes describes this claim as scientifically debatable.

The assumed functionality of male sexual biology also translated to the first experience of the clinic – the collection cup. Men describe being pushed into a room or even just behind a curtain with no instruction beyond “fasten the lid tightly”.

“When I spoke to organisations about this hole in the system, they would tell me it’s because it’s not needed. Men aren’t coming forward for treatment, so there appears to be little demand. But then those that do struggle to find help, which – combined with the social stigma – means that many give up.”

There is a medical and social price to pay, she says. Research into male infertility is nowhere near as advanced as that for female infertility. And societal silence on the subject means men who want and may well be able to have children if treated are not – or being treated by the wrong people.

Among what medical specialists there are, the cultural invisibility of infertile men is inherently conflicting, says Barnes. On the one hand, male infertility doctors complain about the lack of attention the topic receives. But on the other, they realise this invisibility protects men and masculinity by suppressing the issue.

“If you promote male infertility as a label to encourage more men to come forward for treatment, you will have a harder time helping them pretend they’re not actually infertile,” she said.