New research shows male lizards are more likely than females to be attacked by predators because the bright colours they need to attract a mate also make them more conspicuous to birds.

The models that had been attacked showed signs of beak marks, particularly around the head, and some had been decapitated

In the animal kingdom, the flashiest males often have more luck attracting a mate. But when your predators hunt by sight, this can pose an interesting problem.

Like many species, lizards use bright colours for sexual signalling to attract females and intimidate rival males. A new study published in Ecology and Evolution by Kate Marshall from the University of Cambridge’s Department of Zoology and Martin Stevens from the University of Exeter’s Centre for Ecology and Conservation has provided evidence that this signalling comes at a cost.

Using models that replicated the colouration of male and female wall lizards found on the Greek islands of Skopelos and Syros, they found that the male lizard models were less well camouflaged against their habitat and more likely to fall prey to bird attacks.

Marshall, lead author of the study, explains: “we wanted to get to the origins of colour evolution; to find out what is causing colour variation between these lizards. We wanted to know whether natural selection favours camouflage, and whether the conflicting need to have bright sexual signals might impair its effectiveness.

“It has previously been assumed that conspicuous male colours are costly to survival, but this hasn’t been tested before among these specific lizards living on different islands, and in general rarely in a way that takes into account the particular sensitivities of avian vision.”

Birds see the world differently from you or I: they are able to see ultraviolet (UV) light whereas we cannot, which means they perceive colour (and camouflage) in a very different way. To test whether the males really are more visible to feathered predators, the researchers had to develop clay models that accurately replicated the lizards’ colour to a bird’s eye. 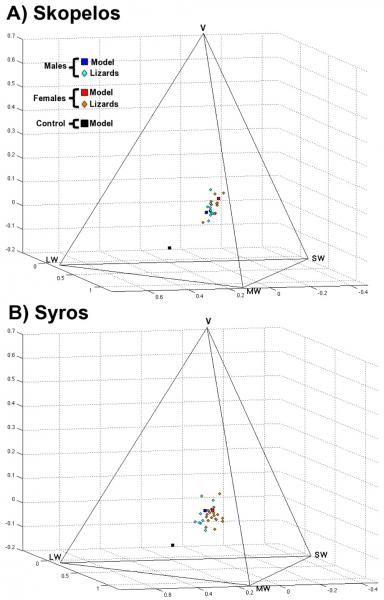 Using visual modelling, Marshall and her colleagues painstakingly tested around 300 colour variations to find ones that matched the male and female colours in order to make the 600 clay lizards used in the study.

Marshall comments: “it was important to get a clay colour that would be indistinguishable from a real lizard to a bird’s eyes: we even tried using a paint colour chart, but they all reflected too much UV. To us the models may not look like very good likenesses, but to a bird the models should have looked the same colour as the real lizards.”

Marshall and her field assistant, Kate Philpot, placed the male and female lizard models in ten sites on each of the two islands and checked them every 24 hours over five days to see which had been attacked by birds. 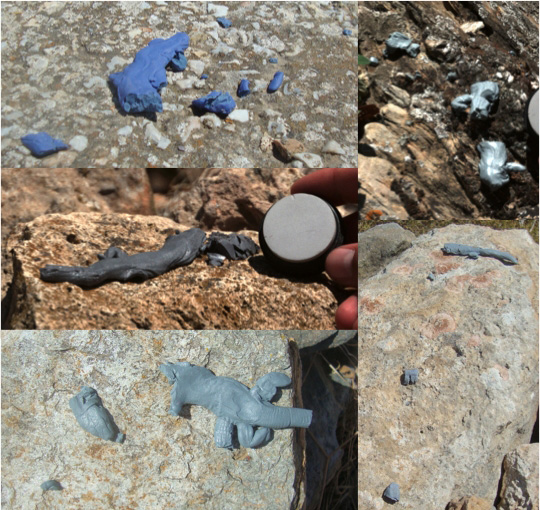 “The models that had been attacked showed signs of beak marks, particularly around the head, and some had been decapitated,” explains Marshall. “We even found a few heads in different fields to the bodies.”

“The fact that the birds focused their attacks on the heads of the models also shows us that they perceived them as real lizards because that is how they would attack real prey,” she adds.

Marshall and the team also tested how conspicuous the models were against their real backgrounds using further modelling of avian vision, and found that the male models were less camouflaged than the females. 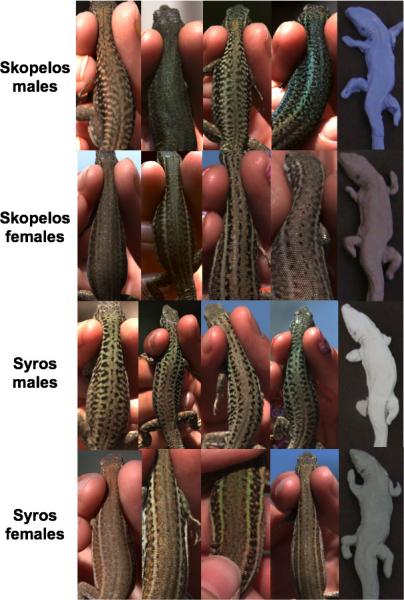 “In females, selection seems to have favoured better camouflage to avoid attack from avian predators. But in males, being bright and conspicuous also appears to be important even though this heightens the risk of being spotted by birds,” says Marshall.

However, it is not entirely a tale of woe for the male Aegean wall lizard. Despite being attacked more than the females by predatory birds, 83% of the male lizard models survived over the course of the five-day experiment. Marshall explains that this may indicate that males have colour adaptations that balance the contradictory needs to attract a mate and to avoid becoming lunch.

“In past work we’ve found these lizards have evolved bright colours on their sides, which are more visible to other lizards on the ground than to birds hunting from above,” explains Marshall. “The visual system of lizards is different again from birds, such as through increased sensitivity to UV, so the colour on their backs is more obvious to other lizards than to birds. Such selective “tuning” of colours to the eyes of different observers might provide at least some camouflage against dangerous predators that sneakily eavesdrop on the bright signals of their prey.”

“With these models we were only able to replicate the overall colour of the lizards rather than their patterns, so it would be interesting to investigate further whether these patterns affect the survival rates of lizard models,” she adds. “It would also be great to apply this type of experiment to other questions, such as how different environments affect the amount of predation that prey animals experience.”

The research was enabled by funding from the Biotechnology and Biological Sciences Research Council, the British Herpetological Society, the Cambridge Philosophical Society, and Magdalene College, Cambridge.