Researchers have found that the formation and breakup of supercontinents over hundreds of millions of years controls volcanic carbon emissions. The results, reported in the journal Science, could lead to a reinterpretation of how the carbon cycle has evolved over Earth’s history, and how this has impacted the evolution of Earth’s habitability.

The link between oxygen levels and the burial of organic material allowed life on Earth as we know it to evolve, but our geological record of this link needs to be re-evaluated.

The researchers, from the University of Cambridge, used existing measurements of carbon and helium from more than 80 volcanoes around the world in order to determine its origin. Carbon and helium coming out of volcanoes can either come from deep within the Earth or be recycled near the surface, and measuring the chemical fingerprint of these elements can pinpoint their source. When the team analysed the data, they found that most of the carbon coming out of volcanoes is recycled near the surface, in contrast with earlier assumptions that the carbon came from deep in the Earth’s interior. “This is an essential piece of geological carbon cycle puzzle,” said Dr Marie Edmonds, the senior author of the study.

Over millions of years, carbon cycles back and forth between Earth’s deep interior and its surface. Carbon is removed from the surface from processes such as the formation of limestone and the burial and decay of plants and animals, which allows atmospheric oxygen to grow at the surface. Volcanoes are one way that carbon is returned to the surface, although the amount they produce is less than a hundredth of the amount of carbon emissions caused by human activity. Today, the majority of carbon from volcanoes is recycled near the surface, but it is unlikely that this was always the case.

Volcanoes form along large island or continental arcs where tectonic plates collide and one plate slides under the other, such as the Aleutian Islands between Alaska and Russia, the Andes of South America, the volcanoes throughout Italy, and the Mariana Islands in the western Pacific. These volcanoes have different chemical fingerprints: the ‘island arc’ volcanoes emit less carbon which comes from deep in the mantle, while the ‘continental arc’ volcanoes emit far more carbon which comes from closer to the surface.

Over hundreds of millions of years, the Earth has cycled between periods of continents coming together and breaking apart. During periods when continents come together, volcanic activity was dominated by island arc volcanoes; and when continents break apart, continental volcano arcs dominate. This back and forth changes the chemical fingerprint of carbon coming to Earth’s surface systematically over geological time, and can be measured through the different isotopes of carbon and helium. 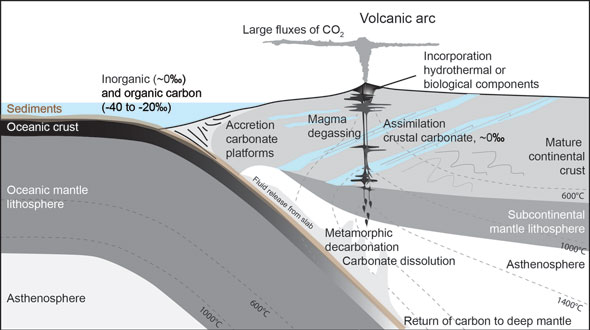 Variations in the isotope ratio, or chemical fingerprint, of carbon are commonly measured in limestone. Researchers had previously thought that the only thing that could change the carbon fingerprint in limestone was the production of atmospheric oxygen. As such, the carbon isotope fingerprint in limestone was used to interpret the evolution of habitability of Earth’s surface. The results of the Cambridge team suggest that volcanoes played a larger role in the carbon cycle than had previously been understood, and that earlier assumptions need to be reconsidered.

“This makes us fundamentally re-evaluate the evolution of the carbon cycle,” said Edmonds. “Our results suggest that the limestone record must be completely reinterpreted if the volcanic carbon coming to the surface can change its carbon isotope composition.”

A great example of this is in the Cretaceous Period, 144 to 65 million years ago. During this time period there was a major increase in the carbon isotope ratio found in limestone, which has been interpreted as an increase in atmospheric oxygen concentration. This increase in atmospheric oxygen was causally linked to the proliferation of mammals in the late Cretaceous. However, the results of the Cambridge team suggest that the increase in the carbon isotope ratio in the limestones could be almost entirely due to changes in the types of volcanoes at the surface.

“The link between oxygen levels and the burial of organic material allowed life on Earth as we know it to evolve, but our geological record of this link needs to be re-evaluated,” said co-author Dr Alexandra Turchyn, also from the Department of Earth Sciences.

The research was funded by the Alfred P. Sloan Foundation, the Deep Carbon Observatory and the European Research Council.

ISS013-E-24184 (23 May 2006) --- Eruption of Cleveland Volcano, Aleutian Islands, Alaska is featured in this image photographed by an Expedition 13 crewmember on the International Space Station.