Analysis of grinding stones reveals that North African communities may have moved slowly and cautiously from hunter-gatherer lifestyles to more settled farming practices. Newly published research by Cambridge archaeologist Dr Giulio Lucarini suggests that a preference for wild crops was a strategic decision.

Rather than being ‘backward’ in their thinking, these nomadic people were highly sophisticated in their pragmatism and deep understanding of plants, animals and climatic conditions

A box of seemingly unremarkable stones sits in the corner of Dr Giulio Lucarini’s office at the McDonald Institute for Archaeological Research where it competes for space with piles of academic journals, microscopes and cartons of equipment used for excavations. These palm-sized pebbles were used as grinding tools by people living in North Africa around 7,000 years ago. Tiny specks of plant matter recently found on their surfaces shine light on a fascinating period of human development and confirm theories that the transition between nomadic and settled lifestyles was gradual.

The artefacts in Lucarini’s office come from a collection held in the store of the Museum of Archaeology and Anthropology (MAA) just a couple of minutes’ walk away. In the 1950s the well-known Cambridge archaeologist Sir Charles McBurney undertook an excavation of a cave called Haua Fteah located in northern Libya.  He showed that its stratigraphy (layers of sediment) is evidence of continuous human habitation from at least 80,000 years ago right up to the present day.  Finds from McBurney’s excavation were deposited at MAA.

In 2007, Professor Graeme Barker, also from Cambridge, started to re-excavate Haua Fteah with support from the ERC-funded TRANS-NAP Project. Until 2014, Barker and his team had the chance to spend more than one month each year excavating the site and surveying the surrounding Jebel Akhdar region, in order to investigate the relationships between cultural and environmental change in North Africa over the past 200,000 years.

Now an analysis of stone grinders from the Neolithic layers of Haua Fteah (dating from 8,000-5,500 years ago), carried out by Lucarini as his Marie Skłodowska-Curie Project ‘AGRINA’, in collaboration with Anita Radini (University of York) and Huw Barton (University of Leicester), yields new evidence about people living at a time seen as a turning point in human exploitation of the environment, paving the way for rapid expansion in population.

Around 11,000 years ago, during the early phase of the geological period known as Holocene, nomadic communities of Near Eastern regions made the transition from a hunter-gatherer lifestyle to a more settled farming existence as they began to exploit domesticated crops and animals developed locally. The research Lucarini is carrying out in Northern Libya and Western Egypt is increasingly revealing a contrasting scenario for the North African regions.

In a paper published today, Lucarini and colleagues explain that the surfaces of the grinders show plant use-wear and contain tiny residues of wild plants that date from a time when, in all likelihood, domesticated grains would have been available to them.  These data are consistent with other evidence from the site, notably those from the analysis of the plant macro-remains carried out by Jacob Morales (University of the Basque Country), which confirmed the presence of wild plants alone in the site during the Neolithic. Together, this evidence suggests that domesticated varieties of grain were adopted late, spasmodically, and not before classical times, by people who lived in tune with their surroundings as they moved seasonally between naturally-available resources. 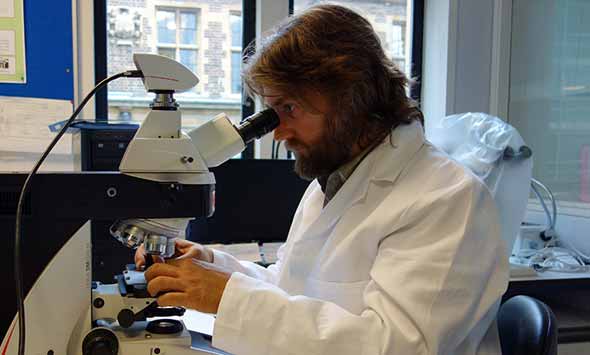 Lucarini is an expert in the study of stone tools and has a particular interest in the beginning of food production economies in North Africa. Using an integrated approach of low and high-power microscopy in the George Pitt-Rivers Lab at the McDonald Institute, and in the BioArCh Lab at the University of York, he and his colleagues were able to spot plant residues, too small to be visible to the naked eye, caught in the pitted surface of several of the stones from Haua Fteah.  Some of the grinders themselves exhibit clear ‘use-wear’ with their surfaces carrying the characteristic polish of having been used for grinding over long periods. 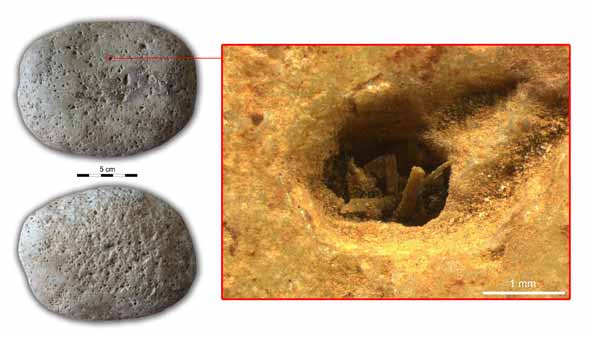 “It was thrilling to discover that microscopic traces of the plants ground by these stones have survived for so long, especially now that we’re able to use powerful high-power microscopes to look at the distinctive shape of the starch granules that offer us valuable clues to the identities of the plant varieties they come from,” says Lucarini.

By comparing the characteristic shape and size of the starch found in the grinders’ crevices to those in a reference collection of wild and domestic plant varieties collected in different North African and Southern European countries, Lucarini and Radini were able to determine that the residues most probably came from one of the species belonging to the Cenchrinae grasses. Various species of the genus Cenchrus are still gathered today by several African groups when other resources are scarce. Cenchrus is prickly and its seed is laborious to extract. But it is highly nutritious and, especially in times of severe food shortage, a highly valuable resource.

“Haua Fteah is only a kilometre from the Mediterranean and close to well-established coastal routes, giving communities there access to commodities such as domesticated grain, or at least the possibility to cultivate them. Yet it seems that people living in the Jebel Akhdar region may well have made a strategic and deliberate choice not to adopt the new farming practices available to them, despite the promise of higher yields but, instead, to integrate them into their existing practices,” says Lucarini.

“It’s interesting that today, even in relatively affluent European countries, the use of wild plants is becoming more commonplace, complementing the trend to use organically farmed food. Not only do wild plants contribute to a healthier diet, but they also more sustainable for the environment.” 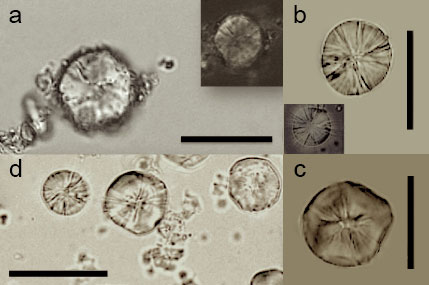 Lucarini suggests that North African communities delayed their move to domesticated grains because it suited their highly mobile style of life. “Opting to exploit wild crops was a successful and low-risk strategy not to rely too heavily on a single resource, which might fail. It’s an example of the English idiom of not putting all your eggs in one basket. Rather than being ‘backward’ in their thinking, these nomadic people were highly sophisticated in their pragmatism and deep understanding of plants, animals and climatic conditions,” he says.

Evidence of the processing of wild plants at Haua Fteah challenges the notion that there was a sharp and final divide between nomadic lifestyles and more settled farming practices – and confirms recent theories that the adoption of domesticated species in North Africa was an addition to, rather than a replacement of, the exploitation of wild resources such as the native grasses that still grow wild at the site.

“Archaeologists talk about a ‘Neolithic package’ – made up of domestic plants and animals, tools and techniques – that transformed lifestyles. Our research suggests that what happened at Haua Fteah was that people opted for a mixed bag of old and new. The gathering of wild plants as well as the keeping of domestic sheep and goats chime with continued exploitation of other wild resources – such as land and sea snails – which were available on a seasonal basis with levels depending on shifts in climatic conditions,” says Lucarini. 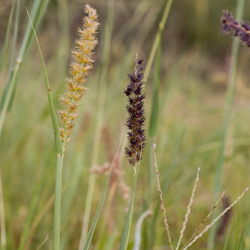 “People had an intimate relationship with the environment they were so closely tuned to and, of course, entirely dependent on. This knowledge may have made them wary of abandoning strategies that enabled them to balance their use of resources – in a multi-spectrum exploitation of the environment.”

Haua Fteah continues to pose puzzles for archaeologists. The process of grinding requires two surfaces – a hand-held upper grinding tool and a base grinding surface. Excavation has yielded no lower grinders which made have been as simple as shallow dish-shaped declivities in local rock surfaces. “Only a fraction of the extensive site has been excavated so it may be that lower grinders do exist but they simply haven’t been found yet,” says Lucarini.

The uncertain political situation in Libya has resulted in the suspension of fieldwork in Haua Fteah, in particular the excavation of the Neolithic and classical layers of the cave. Lucarini hopes that a resolution to the current crisis will allow work to resume within the next few years. He says: “Haua Fteah, with its 100,000 years of history and continuous occupation by different peoples, is a symbol of how Libya can be hospitable and welcoming. We trust in this future for the country.”