How the stick insect sticks (and unsticks) itself

New research shows the fluid found on insects’ feet does not help them adhere to vertical and inverted surfaces, as previously thought, but may in fact help them to unstick their feet more easily to allow greater control over their sticking power.

When the first microscopes were invented in the 17th century, one of the first things scientists looked at was a fly’s foot. The purpose of the fluid that you find on insects’ feet has remained a fascinating question ever since

Geckos, tree frogs, spiders and insects all share a special skill – they can walk up vertical surfaces and even upside down using adhesive pads on their feet. But geckos have ‘dry’ feet, while insects have ‘wet’ feet.

Scientists have assumed that the two groups use different mechanisms to keep their feet firmly attached to a surface, but new research from David Labonte and Dr Walter Federle in the University of Cambridge’s Department of Zoology provides evidence that this isn’t actually the case.

“It has generally been assumed that the fluid on their feet must be involved in helping insects like stick insects adhere to a surface by capillary and viscous forces – in the same way that a beer glass will stick to a glass table if it’s wet on the bottom,” explains Labonte, lead author of the study published in Soft Matter, “but our research shows that the fluid is likely used for something else entirely – it may even help insects unstick their feet.” 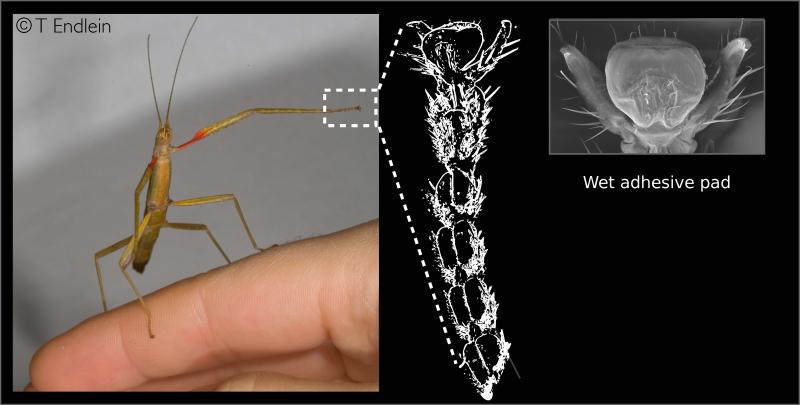 By measuring how much force was required to detach the foot of a stick insect from a glass plate at different speeds and applying the theory of fracture mechanics, Labonte and Federle found that only a ‘dry’ contact model could explain the data. They also carried out a comparison of the sticking performance of wet and dry adhesive pads, which revealed that there is a striking lack of differences between the two, contrary to previous opinion.

Insects and geckos need to walk up vertical surfaces and even upside down in order to get to the places where they feed and to escape from predators. As smooth surfaces don’t allow them to grip with their claws, they need soft adhesive pads on their feet and legs. This means they need to have excellent control over adhesion – to ensure their feet stick when they want them to, but can also unstick easily to allow them to walk around or run away from predators.

“Both wet and dry adhesive pads behave in a similar way to soft, rubbery materials in that, when they are pressed against another surface, there is a large area of contact between the two surfaces,” says Labonte. Both pad types then rely on shear forces to control their stickiness: insect and gecko feet are much stickier when they are pulled towards the body.

“The fluid that insects have on their adhesive pads doesn’t seem to increase the pads' stickiness by means of capillary or viscous forces, and the same may hold for the fluid on the feet of spiders and tree frogs.” 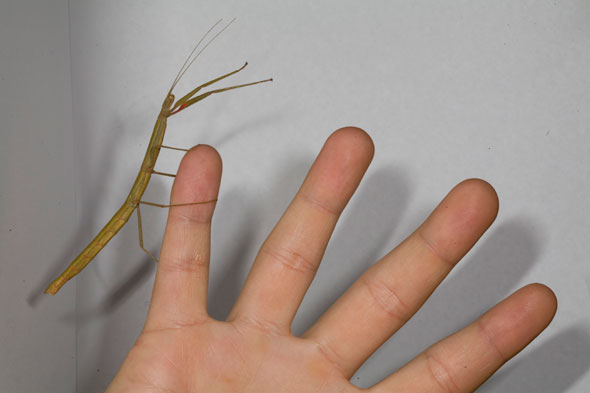 So what is this fluid for?

Labonte and Federle believe it may act as a ‘release layer’ to help insects unstick their feet when they want to move. “If you think of commercial adhesives, like Scotch tape, there are often bits of tape or residue left behind when you remove it quickly. But a stick insect needs to be able to unstick its feet without expending a lot of energy or leaving bits of its foot still stuck to a leaf,” explains Federle.

“The fluid may act as a lubricant to make detachment easier, giving insects greater control over adhesion at very short timescales.”

“When the first microscopes were invented in the 17th century, one of the first things scientists looked at was a fly’s foot. The purpose of the fluid that you find on insects’ feet has remained a fascinating question ever since,” says Labonte. 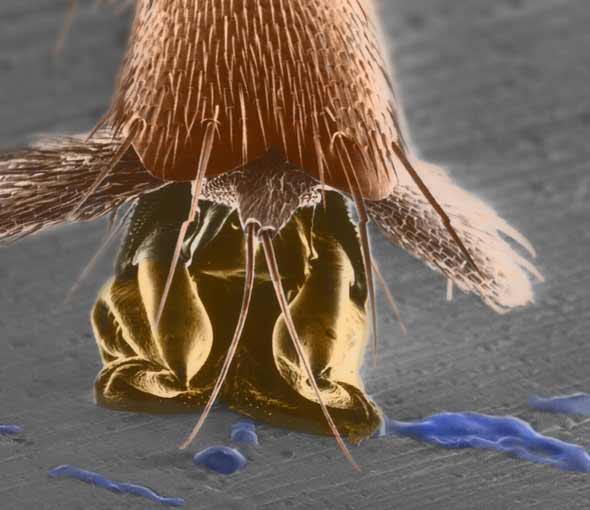 But it’s not just an age-old question that this research is helping to answer. The researchers say there may be lessons to learn for modern manmade devices.

“Understanding how insects control adhesion could have applications where adhesion is needed in a dynamic context, for instance in the production of small electronic devices, where it’s necessary to pick up and place down tiny parts with ease and accuracy,” adds Federle.

This research was enabled by funding from the Biotechnology and Biological Sciences Research Council and the Human Frontier Science Programme.

David Labonte and Walter Federle ‘Rate-dependence of ‘wet’ biological adhesives and the function of the pad secretion in insects’ Soft Matter (2015).