How many ways can you arrange 128 tennis balls? Researchers solve an apparently impossible problem

A bewildering physics problem has apparently been solved by researchers, in a study which provides a mathematical basis for understanding issues ranging from predicting the formation of deserts, to making artificial intelligence more efficient.

The brute force way of doing this would be to keep changing the system and recording the configurations. Unfortunately, it would take many lifetimes before you could record it all. Also, you couldn’t store them, because there isn’t enough matter in the universe.

In research carried out at the University of Cambridge, a team developed a computer program that can answer this mind-bending puzzle: Imagine that you have 128 soft spheres, a bit like tennis balls. You can pack them together in any number of ways. How many different arrangements are possible?

The answer, it turns out, is something like 10250 (1 followed by 250 zeros). The number, also referred to as ten unquadragintilliard, is so huge that it vastly exceeds the total number of particles in the universe.

Far more important than the solution, however, is the fact that the researchers were able to answer the question at all. The method that they came up with can help scientists to calculate something called configurational entropy – a term used to describe how structurally disordered the particles in a physical system are.

Being able to calculate configurational entropy would, in theory, eventually enable us to answer a host of seemingly impossible problems – such as predicting the movement of avalanches, or anticipating how the shifting sand dunes in a desert will reshape themselves over time.

These questions belong to a field called granular physics, which deals with the behaviour of materials such as snow, soil or sand. Different versions of the same problem, however, exist in numerous other fields, such as string theory, cosmology, machine learning, and various branches of mathematics. The research shows how questions across all of those disciplines might one day be addressed.

Stefano Martiniani, a Gates Scholar at St John’s College, University of Cambridge, who carried out the study with colleagues in the Department of Chemistry, explained: “The problem is completely general. Granular materials themselves are the second most processed kind of material in the world after water and even the shape of the surface of the Earth is defined by how they behave.”

“Obviously being able to predict how avalanches move or deserts may change is a long, long way off, but one day we would like to be able to solve such problems. This research performs the sort of calculation we would need in order to be able to do that.”

At the heart of these problems is the idea of entropy – a term which describes how disordered the particles in a system are. In physics, a “system” refers to any collection of particles that we want to study, so for example it could mean all the water in a lake, or all the water molecules in a single ice cube.

When a system changes, for example because of a shift in temperature, the arrangement of these particles also changes. For example, if an ice cube is heated until it becomes a pool of water, its molecules become more disordered. Therefore, the ice cube, which has a tighter structure, is said to have lower entropy than the more disordered pool of water.

At a molecular level, where everything is constantly vibrating, it is often possible to observe and measure this quite clearly. In fact, many molecular processes involve a spontaneous increase in entropy until they reach a steady equilibrium.

In granular physics, however, which tends to involve materials large enough to be seen with the naked eye, change does not happen in the same way. A sand dune in the desert will not spontaneously change the arrangement of its particles (the grains of sand). It needs an external factor, like the wind, for this to happen.

This means that while we can predict what will happen in many molecular processes, we cannot easily make equivalent predictions about how systems will behave in granular physics. Doing so would require us to be able to measure changes in the structural disorder of all of the particles in a system - its configurational entropy.

To do that, however, scientists need to know how many different ways a system can be structured in the first place. The calculations involved in this are so complicated that they have been dismissed as hopeless for any system involving more than about 20 particles. Yet the Cambridge study defied this by carrying out exactly this type of calculation for a system, modelled on a computer, in which the particles were 128 soft spheres, like tennis balls.

“The brute force way of doing this would be to keep changing the system and recording the configurations,” Martiniani said. “Unfortunately, it would take many lifetimes before you could record it all. Also, you couldn’t store the configurations, because there isn’t enough matter in the universe with which to do it.”

Instead, the researchers created a solution which involved taking a small sample of all possible configurations and working out the probability of them occurring, or the number of arrangements that would lead to those particular configurations appearing.

Based on these samples, it was possible to extrapolate not only in how many ways the entire system could therefore be arranged, but also how ordered one state was compared with the next – in other words, its overall configurational entropy.

Martiniani added that the team’s problem-solving technique could be used to address all sorts of problems in physics and maths. He himself is, for example, currently carrying out research into machine learning, where one of the problems is knowing how many different ways a system can be wired to process information efficiently.

“Because our indirect approach relies on the observation of a small sample of all possible configurations, the answers it finds are only ever approximate, but the estimate is a very good one,” he said. “By answering the problem we are opening up uncharted territory. This methodology could be used anywhere that people are trying to work out how many possible solutions to a problem you can find.”

The paper, Turning intractable counting into sampling: computing the configurational entropy of three-dimensional jammed packings, is published in the journal, Physical Review E. 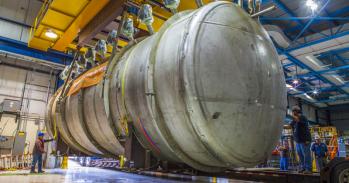 New results deal a blow to the theoretical sterile neutrino