A test for a wide range of genetic risk factors could improve doctors’ ability to work out which women are at increased risk of developing breast cancer, a major study of more than 65,000 women has shown.

Breast cancer genes are rarely out of the news, but we’ve now reached a crucial stage at which all this research can be combined to help target screening and advice to those women who need them the most.

The research, a collaboration of hundreds of research institutions led by the University of Cambridge and the Institute of Cancer Research, London, showed that a test for differences in 77 separate letters of DNA code could indicate a woman’s risk of developing breast cancer.

The study, the most definitive of its type conducted so far, was funded by a range of organisations including Cancer Research UK and Breakthrough Breast Cancer, and is published today in the Journal of the National Cancer Institute.

The researchers came up with a ‘score’ for each woman based on the letters they had in each of the 77 positions of their DNA code, using one of the world’s biggest databases of genetic information – called the Collaborative Oncological Gene-Environment Study (COGS).

A woman in the top one per cent for the polygenic risk score was more than three times more likely to develop breast cancer than average – corresponding to a risk for these women of around one in three.
The researchers also delved into a range of other elements of each woman’s cancer – such as its type, and the age it was diagnosed. The genetic score was particularly good at predicting risk in women who developed oestrogen receptor positive disease, the type of disease most responsive to hormonal treatments such as tamoxifen.

Analysing this panel of 77 genetic markers – all of which had previously been linked with slight increases in breast cancer risk on their own – was much more accurate in defining risk than previous tests that used fewer markers.

Importantly, the study also suggests that using this genetic testing alongside current measures would make current risk screening methods more accurate. For example, the researchers showed that the risk score could predict breast cancer risk both in women with and without a family history of the disease.

Study co-leader Professor Montserrat Garcia-Closas, Professor of Epidemiology at the Institute of Cancer Research, London, said: “Our study is the most definitive so far to show the clear benefits of using genetic testing for a large number of genetic risk factors in identifying women at elevated risk of developing breast cancer. This type of testing could fit alongside other standard risk measures, such as family history and body mass index, to improve our ability to target the best preventive treatments and advice to those women most likely to benefit from them."

The researchers say it is important to work out how this type of test could be used widely in a healthcare, rather than in a research setting. Currently available tests can analyse a handful of high-risk genes, but outside of looking for changes to these genes in women with a history of breast cancer in their close family, genetic testing is not widely offered to women.

Study co-leader Professor Douglas Easton, Director of the Centre for Cancer Genetic Epidemiology at the University of Cambridge, said: “Breast cancer genes are rarely out of the news, but we’ve now reached a crucial stage at which all this research can be combined to help target screening and advice to those women who need them the most.

“There’s still work to be done to determine how tests like this could complement other risk factors, such as age, lifestyle and family history, but it’s a major step in the right direction that will hopefully see genetic risk prediction become part of routine breast screening in the years to come.”

Nell Barrie, Senior Science Communications Manager at Cancer Research UK, said: “This study shows how the genetic map of breast cancer that scientists have been building up over the years might be used to identify women most at risk, so we can take steps to reduce their chances of developing the disease or catch it at the earliest possible stage.”

Dr Matthew Lam, Senior Research Officer at Breakthrough Breast Cancer, said: “In recent years we’ve learnt so much about genetic risk factors of breast cancer – in fact Breakthrough researchers had a hand in discovering over 60 of the genetic markers associated with the disease. What’s great to see now is that these findings are starting to be translated into practical methods to predict risk on an individual basis.”

Adapted from a press release from the Institute of Cancer Research. 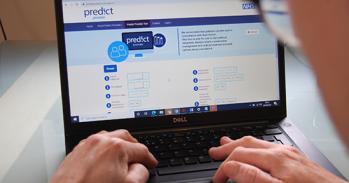