Functioning ‘mechanical gears’ seen in nature for the first time

Previously believed to be only man-made, a natural example of a functioning gear mechanism has been discovered in a common insect - showing that evolution developed interlocking cogs long before we did.

In Issus, the skeleton is used to solve a complex problem that the brain and nervous system can’t

The juvenile Issus - a plant-hopping insect found in gardens across Europe - has hind-leg joints with curved cog-like strips of opposing ‘teeth’ that intermesh, rotating like mechanical gears to synchronise the animal’s legs when it launches into a jump.

The finding demonstrates that gear mechanisms previously thought to be solely man-made have an evolutionary precedent. Scientists say this is the “first observation of mechanical gearing in a biological structure”.

Through a combination of anatomical analysis and high-speed video capture of normal Issus movements, scientists from the University of Cambridge have been able to reveal these functioning natural gears for the first time. The findings are reported in the latest issue of the journal Science.

The gears in the Issus hind-leg bear remarkable engineering resemblance to those found on every bicycle and inside every car gear-box. Each gear tooth has a rounded corner at the point it connects to the gear strip; a feature identical to man-made gears such as bike gears – essentially a shock-absorbing mechanism to stop teeth from shearing off.

The gear teeth on the opposing hind-legs lock together like those in a car gear-box, ensuring almost complete synchronicity in leg movement - the legs always move within 30 ‘microseconds’ of each other, with one microsecond equal to a millionth of a second. 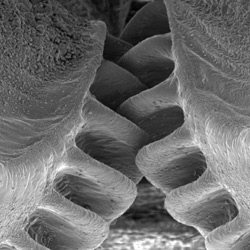 This is critical for the powerful jumps that are this insect’s primary mode of transport, as even miniscule discrepancies in synchronisation between the velocities of its legs at the point of propulsion would result in “yaw rotation” - causing the Issus to spin hopelessly out of control.

“This precise synchronisation would be impossible to achieve through a nervous system, as neural impulses would take far too long for the extraordinarily tight coordination required,” said lead author Professor Malcolm Burrows, from Cambridge’s Department of Zoology.

“By developing mechanical gears, the Issus can just send nerve signals to its muscles to produce roughly the same amount of force - then if one leg starts to propel the jump the gears will interlock, creating absolute synchrony.

“In Issus, the skeleton is used to solve a complex problem that the brain and nervous system can’t,” said Burrows. “This emphasises the importance of considering the properties of the skeleton in how movement is produced.”

"We usually think of gears as something that we see in human designed machinery, but we've found that that is only because we didn't look hard enough,” added co-author Gregory Sutton, now at the University of Bristol.

“These gears are not designed; they are evolved - representing high speed and precision machinery evolved for synchronisation in the animal world.”

Interestingly, the mechanistic gears are only found in the insect’s juvenile – or ‘nymph’ – stages, and are lost in the final transition to adulthood. These transitions, called ‘molts’, are when animals cast off rigid skin at key points in their development in order to grow.

It’s not yet known why the Issus loses its hind-leg gears on reaching adulthood. The scientists point out that a problem with any gear system is that if one tooth on the gear breaks, the effectiveness of the whole mechanism is damaged. While gear-teeth breakage in nymphs could be repaired in the next molt, any damage in adulthood remains permanent.

It may also be down to the larger size of adults and consequently their ‘trochantera’ – the insect equivalent of the femur or thigh bones. The bigger adult trochantera might allow them to create enough friction to power the enormous leaps from leaf to leaf without the need for intermeshing gear teeth to drive it, say the scientists.

Each gear strip in the juvenile Issus was around 400 micrometres long and had between 10 to 12 teeth, with both sides of the gear in each leg containing the same number – giving a gearing ratio of 1:1. 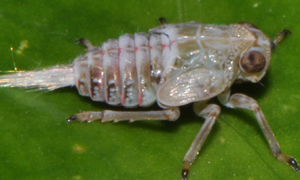 Unlike man-made gears, each gear tooth is asymmetrical and curved towards the point where the cogs interlock – as man-made gears need a symmetric shape to work in both rotational directions, whereas the Issus gears are only powering one way to launch the animal forward.

While there are examples of apparently ornamental cogs in the animal kingdom - such as on the shell of the cog wheel turtle or the back of the wheel bug - gears with a functional role either remain elusive or have been rendered defunct by evolution.

The Issus is the first example of a natural cog mechanism with an observable function, say the scientists. 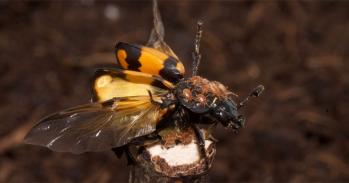 Mighty mites give scrawny beetles the edge over bigger rivals