New study finds links between thyroid hormones and body temperature, shedding new light on changes that occur during fevers, and euphoric feelings arising from a hot bath or sauna

In everyday life, the accelerated release of thyroxine that will take place as the body core temperature rises to 39ºC in a sauna or hot-tub will contribute to an enhancement of the activity of body and mind: to the euphoria and to the occasional Eureka!

The thyroid hormone thyroxine, which controls our day-to-day activity and was previously believed to remain at a constant level in the blood, actually fluctuates as a result of a protein which modifies the release of the hormone depending on body temperature, new research reveals. The research was published today, 29 January, in the journal Proceedings of the Royal Society B.

The hormone thyroxine regulates metabolism in all mammals, including humans. If there is too much, it leads to hyperactivity, and if there is too little, it leads to dormancy. This essential hormone is carried and stored in the blood by the protein thyroxine-binding globulin (TBG).

It was previously thought that the levels of the hormone remained constant. However, the new research, led by Robin Carrell, Emeritus Professor of Haematology at the University of Cambridge, found that when the body’s temperature rises, TBG’s affinity for thyroxine decreases, resulting in an increase of the available hormone and a subsequent increase in metabolism. If the body temperature drops, such as when an animal goes into hibernation, TBG’s affinity for thyroxine increases, resulting in a decrease in the availability of the hormone and a decrease in metabolism.

The findings provide insight into the changes that occur during fevers, when the body accelerates its metabolism to counter infection and inflammation. The research shows that TBG has an inbuilt booster which gives a surge in thyroxine release as the body temperature rises above 37ºC. The study found that a body temperature of 39ºC will result in a 23 per cent increase in concentration of thyroxine levels in the blood – temporarily moving into the range seen in patients with hyperthyroidism.

Professor Carrell said: “The effect of temperature on thyroxine levels has been largely overlooked because most measurements of the hormone are carried out when the blood is at room temperature. As a result, blood samples taken from hypothermia or heatstroke patients, or from an infant with fever, would not show the change of free thyroxine in the blood. We are excited by our findings as they are directly relevant to better understanding fevers, which, although beneficial, can pose problems, especially to young children.”

The researchers believe that whilst being advantageous as a defence mechanism in temperate climates, such an increase will be a potential disadvantage in the arid climate of central Australia. There the historic survival risk has been not so much the infection itself, but rather the dehydration and heat exhaustion that accompany dysentery and other common illnesses in childhood. The two genetic mutations have become incorporated in the DNA of some 40% of West Australian aboriginals, to give a halving of the surge in metabolic activity that would otherwise take place in fevers.

The research also sheds light on infant febrile seizures - convulsive episodes that often accompany the spiking fevers during early childhood. Although not typically life threatening, these seizures, which can occur in young babies, can be a terrifying experience for parents. The researchers believe that part of the reason these seizures may occur is because the brain is especially sensitive to thyroxine - rises in thyroxine result in increased brain activity, hyper-excitability and, in the extreme, convulsive seizures. The occurrence of the last in response to increased thyroxine can now be seen to have direct implications for the previously inexplicable febrile seizures which cease as soon as the infant’s body is cooled.

Additionally, the scientists believe their discovery helps explain the euphoric feeling some people experience after spending time in a sauna or hot-tub.

Professor Carrell added: “In everyday life, the accelerated release of thyroxine that will take place as the body core temperature rises to 39ºC in a sauna or hot-tub will contribute to an enhancement of the activity of body and mind: to the euphoria and to the occasional Eureka! Old figures of speech - ‘hot headedness’ and ‘fevered imagination’ – can now be seen to have a basis in science.” 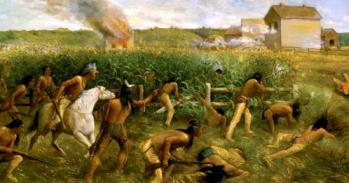 The fall and rise of Native North America