Latest research shows subordinate meerkat siblings grow competitively, boosting their chance of becoming a dominant breeder when a vacancy opens up by making sure that younger siblings don’t outgrow them.

Meerkats live in groups of up to 50 individuals, yet a single dominant pair will almost completely monopolise reproduction, while subordinates help to raise offspring through feeding and babysitting. Since only a small minority of individuals ever get to be dominants, competition for the breeding role is intense in both sexes and females are unusually aggressive to each other.

Within groups, subordinate females are ranked in a hierarchy based on age and weight, forming a “reproductive queue”. When dominant females die, they are usually replaced by their oldest and heaviest daughter, though younger sisters sometimes outgrow their older sisters and can replace them in breeding queues.

University of Cambridge scientists working on wild Kalahari meerkats identified pairs of sisters and artificially increased the growth of the younger member of each pair by feeding them three times a day with hard-boiled egg.

The scientists weighed them and their (unfed) older sisters daily for three months. The results, published today in the journal Nature, show that the increased growth of younger females stimulated their older sisters to increase their daily food intake and weight gain in an attempt to outgrow their rivals.

Tellingly, the extent to which the older sister increased her weight was greater when her younger sister’s weight gain was relatively large than when it was slight.

These results suggest that subordinate meerkats are continually keeping tabs on those nearest them in the breeding queue, and make concerted efforts to ensure they are not overtaken in size and social status by younger and heavier upstarts.

But competitive growth does not stop there. If a female meerkat gets to be a dominant breeder, her period in the role (and her total breeding success) is longer if she is substantially heavier than the heaviest subordinate in her group.

During the three months after acquiring their new status, dominant females gain further weight to reduce the risk of being usurped. Regular weighing sessions of newly established dominants showed that that, even if they were already adult, they increased in weight during the first three months after acquiring the dominant position – and that the magnitude of their weight increase was greater if the heaviest subordinate of the same sex in their group was close to them in weight.

This is the first evidence for competitive growth in mammals. The study’s authors suggest that other social mammals such as domestic animals, primates and even humans might also adjust their growth rates to those of competitors, though these responses may be particularly well developed in meerkats as a result of the unusual intensity of competition for breeding positions.

“Size really does matter and it is important to stay on top,” said senior author Professor Tim Clutton-Brock, who published the first major overview of research on mammalian social evolution this month in the book Mammal Societies (Wiley).

“Our findings suggest that subordinates may track changes in the growth and size of potential competitors through frequent interactions, and changes in growth rate may also be associated with olfactory cues that rivals can pick up,” Clutton-Brock said.

“Meerkats are intensely social and all group members engage in bouts of wrestling, chasing and play fighting, though juveniles and adolescents play more than adults. Since they live together in such close proximity and interact many times each day, it is unsurprising that individual meerkats are able to monitor each other’s strength, weight and growth.”

Male meerkats leave the group of their birth around the age of sexual maturity and attempt to displace males in other groups, and here, too, the heaviest male often becomes dominant. The researchers found a similar strategy of competitive weight-gain in subordinate males.

The data was collected over the course of twenty years and encompassed more than forty meerkat groups, as part of the long-term study of wild meerkats in the Southern Kalaharu at the Kuruman River Reserve, South Africa, which Clutton-Brock began in 1993. In the course of the study, the team have followed the careers of several thousand individually-recognisable meerkats – some of which starred in the award winning docu-soap Meerkat Manor, filmed by Oxford Scientific Films.

The meerkats were habituated to humans and individually recognisable due to dye marks. Most individuals were trained to climb onto electronic scales for their weigh-ins, which occurred at dawn, midday and dusk, on ten days of every month throughout their lives. This is the first time it has been feasible to weigh large numbers of wild mammals on a daily basis. 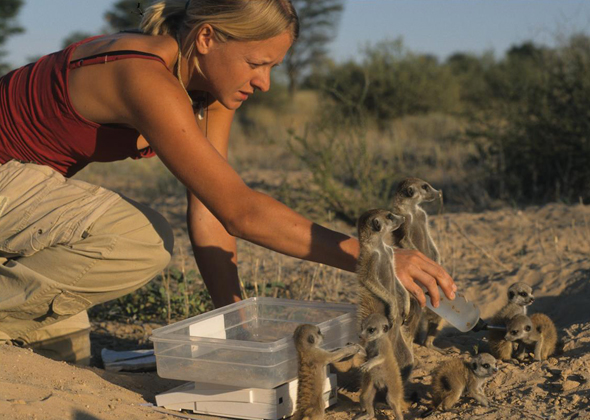 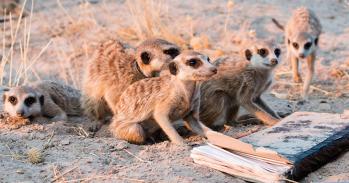