Dragonsblood: the alchemy of paint

Through his exploration of the science of art, the recipes of medieval artists and the writings of alchemists, art conservation scientist Spike Bucklow sets out to disentangle the alchemy of medieval paint.

I began to wonder about the medieval artists themselves: how would they have explained the materials and methods involved in making an altarpiece?

Dragonsblood – a red pigment prized for the best part of two millennia and discussed by apothecaries, alchemists and painters alike – was said to be the mixed, coagulated blood of dragons and elephants collected from the place where the beasts fought and died together. Actually, it was a tree resin, and a sample of the pigment can be found today in Queens’ College, in a medicine cabinet assembled in 1702 by Giovanni Francesco Vigani, the University of Cambridge’s first Professor of Chemistry. Dragonsblood also features inThe Alchemy of Paint, a book about the colours used by medieval artists. It is a book that attempts to understand medieval artists’ materials as they were perceived by the people who used them. But it was inspired by a very practical modern problem.

I work as a scientist in the University’s Hamilton Kerr Institute, a department of The Fitzwilliam Museum that specialises in the conservation and restoration of paintings. In 1994, the Institute received the Thornham Parva Retable, a 12ft-long altarpiece painted in the 14th century for a Dominican Priory in Thetford, Norfolk, by artists from Norwich. It had survived destruction in Henry Vlll’s dissolution of the monasteries in the 16th century but was lost until 1927, when it was discovered in a stable loft. By this time, the original 1330s paint was almost entirely covered with paint applied in the 1770s, which had to be removed in order to conserve the medieval material.

The Institute’s treatment of the Retable was the focus of considerable scrutiny because it is the largest, best-preserved and second oldest altarpiece in the UK. A 22-strong committee of academics, funding bodies and parishioners discussed how to proceed. Over the course of two years, during which microscopic paint samples were analysed by electron microscopy, gas chromatography and mass spectrometry, a consensus gradually came together and the conservation work began.

The suggested treatment strategy was accepted, in large part, because it was based on scientific evidence. As a conservation scientist, from these analyses I understood the consequence of the artists’ materials in terms of their physical and chemical properties, their interaction with the environment and their behaviour when undergoing conservation treatment. But I began to wonder about the medieval artists themselves: how would they have explained the materials and methods involved in making an altarpiece? Were they influenced by their Dominican patrons or indeed by the closeness of Cambridge’s intellectual orbit, both well known in the 14th century for their interest in science? 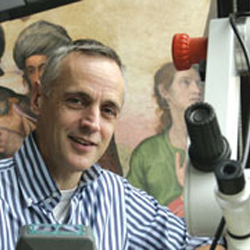 Looking for clues, I consulted artists’ treatises detailing medieval recipes for pigments and paints, such as the manuals written by Theophilus Presbyter, a 12th-century Benedictine monk, and Theodore Turquet de Mayerne, physician to Charles I and friend of the artist van Dyck. But connecting the physical evidence offered by paintings to the artists’ recipes, which often verged on the bizarre and magical, was not always straightforward. The legendary origin of dragonsblood is a case in point. Why would artists say that this derived from dragons and elephants fighting to the death when they knew dragonsblood was really a tree resin? Other medieval recipes were just as evocative: a stone from the doorstep of Paradise and a metal won by one-eyed horsemen from ferocious griffins near the North Pole. The recipe books certainly didn’t make sense according to the science that I knew. I needed to brush up on the science with which the artists were familiar: alchemy.

The medieval palette owed much to what some have described as ‘cloak-and-dagger science’, conducted by artists employing secret recipes to create the luxurious colours we are familiar with today. This was the era of alchemy, best known for the quest of alchemists to turn base metals into gold and to find the elixir of eternal life, when scientists like the Dominican Albertus Magnus wrote on the subject. Researching their writings provided me with the necessary technical background to begin the challenge of connecting the physical evidence offered by the scientific analysis of paintings and the recipes in artists’ treatises. The Alchemy of Paint is the fruit of that challenge.

Colours, it seems, were read differently in the mindset of medieval Europe. Not only in how people responded to them – ‘scarlet’ today describes a colour, but it was originally a type of cloth – but also in how artists considered their materials. Their ideas, fed by the philosophers and scientists of the time, would probably not be too out of place in the University’s 1209 syllabus 800 years ago. Today, an awareness of their ideas helps ensure that conservation of art is undertaken with cultural sensitivity and also immeasurably enhances our appreciation of their art.

Attempting to join up artists’ theory and practice has been a lot of fun. Walking my dog around Cambridgeshire, across fields and over the nearest things to hills that the region has to offer, I saw the sun set and the stars come out, the seasons come and go, and the colours change. I attempted to familiarise myself with what CS Lewis calledThe Discarded Image, the poetic way that the medieval world view synthesised ‘the whole organisation of their theology, science and history into a single, complex, harmonious mental model of the universe’. In the medieval world, everything had meaning, even the pigments they painted with. Guidance from the ‘discarded image’ helped me to consider artists’ materials and methods in ways that modern science could not.

The Alchemy of Paint was a response to a very practical situation: the desire for a broader and deeper view of the Thornham Parva Retable, as well as the Westminster Retable, treated between 1998 and 2005 at the Institute, and the Macclesfield Psalter acquired by The Fitzwilliam Museum in 2005. I was lucky enough to be by the bus-stop, as it were, when three medieval masterpieces came along together. It was an enormous privilege to get to know them and they all informed the thinking behindThe Alchemy of Paint. And I certainly hope that the book will have a practical effect – to encourage students and researchers to engage more profoundly with the products of other cultures.

And the Thornham Parva Retable? It finally returned home in 2003, its treatment hailed as a great success by parishioners, funding bodies and the academic community alike. It even won an award.