Researchers in the Department of Pathology have established precisely how the ‘cutting and pasting’ of genetic material from one chromosome to another results in cancer.

Lymphoma is an umbrella term that describes cancer of the white blood cells of the lymphatic system, which normally acts to protect the body against infection. In lymphoma, malignant changes in a white blood cell causes it to divide abnormally and out of control; not only are these cells unable to protect the body against infection, and in fact interfere with the growth of healthy cells, but they also build up, often in lymph nodes, as tumours.

Lymphoma accounts for more than 9,000 new cancer cases diagnosed each year in the UK alone and the incidence is rising by about 4% per year. Some of these cases appear to result following viral infections, immunodeficiency or autoimmunity, but for the most part we don’t know what causes the genetic alterations underlying the different subtypes of lymphoma, of which over 30 are now known. However, progress is being made in understanding what effect the genetic alteration has on the cell in which it occurs.

Dr Suzanne Turner leads a group in the Department of Pathology who are interested in a subtype of lymphoma that, although rare, has become a paradigm for understanding the growth and development of lymphomas (lymphomagenesis) because of its well-defined genetic alteration.

The many different subtypes of lymphoma have alterations that range from single mutations, through loss and gain in regions of genetic material, to large-scale chromosomal changes. The cancer that interests Dr Turner, anaplastic large cell lymphoma (ALCL), falls into this last category because it results when sections of genetic material from two chromosomes are essentially ‘cut and pasted’ in the wrong place.

Genesis of a lymphoma

Although relatively rare in adults, ALCL accounts for 1 in 10 cases of all lymphomas in children. The most common type of ALCL is caused by the swapping of genetic material between chromosomes 2 and 5. Rather like the joining together of parts of two different sentences, swapping segments of chromosomes can sometimes result in nonsense. But in some cases, the two parts produce an intelligible outcome, albeit with a different meaning. This is what happens in ALCL: the altered genetic code, which juxtaposes the gene for nucleophosmin (NPM) on chromosome 5 with the gene for anaplastic lymphoma kinase (ALK) on chromosome 2, generates a new gene product (NPM-ALK) at the fusion point between the two chromosomes. Although only portions of the two genes remain, together they create a new protein with altered functions.

Dr Turner’s group was one of the first research groups in the world to demonstrate that NPM-ALK can cause cancer. They discovered that the errant protein sets off a cascade of events that confers survival and growth properties on the cells in which it is expressed. The cells proliferate uncontrollably and a lymphoma is born.

Dr Turner’s group has developed model systems to investigate both the specific cell type in which the translocation and disease originate and whether the normal functions of the immune system contribute to the disease process. Potential new drugs and drug combinations, particularly those that inhibit the NPM-ALK protein, are being tested with the long-term aim of taking these into the clinic. A collaboration with Dr Amos Burke, Consultant Oncologist within the Department of Paediatric Haematology and Oncology at Cambridge University Hospitals NHS Foundation Trust, provides an important clinical perspective on the work. And new imaging methods developed by Professor Kevin Brindle in the Cambridge Research Institute are being used to detect treatment response at an early stage.

For ALCL, the long-term goal is to develop a way of inhibiting NPM-ALK and the catastrophic malignant effects that it initiates within the white blood cell in which it occurs. But these studies will also complete a story – one that explains the way in which lymphoma can be set in motion… and be stopped in its tracks.

For more information, please contact Dr Suzanne Turner (sdt36@cam.ac.uk) at the Division of Molecular Histopathology in the Department of Pathology. Dr Turner is a Leukaemia Research Bennett Fellow and is also funded by the Kay Kendal Leukaemia Fund and Cancer Research UK. 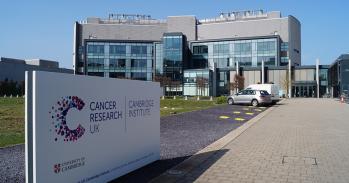