Conquering a continent: how the French language circulated in Britain and medieval Europe

A 13th-century manuscript of Arthurian legend once owned by the Knights Templar is one of the star attractions of a new exhibition opening today at Cambridge University Library.

The idea that post-classical Western literature really begins with the Renaissance is completely false. It begins right here, among the very manuscripts and fragments in this exhibition.

An important manuscript of the Lancelot-Grail, it lay forgotten and unopened for five centuries until its rediscovery in North Yorkshire and its sale in 1944. Detailing the search for the Holy Grail, it goes on public display for the first time alongside the only existing fragment of an episode from the earliest-known version of the Tristan and Isolde legend. Also on display is an early example of the kind of guide familiar to thousands of today’s holiday-makers: a French phrasebook.

A free exhibition, The Moving Word: French Medieval Manuscripts in Cambridge, looks at the enormous cultural and historic impact of the French language upon life in England, Europe, the Middle East and beyond at a time when French – like Latin before it and English today – was the global language of culture, commerce and politics.

The exhibition, curated by Bill Burgwinkle and Nicola Morato, is part of a wider AHRC-funded research project looking at the question of how knowledge travelled in manuscript form through the continent and into the Eastern Mediterranean world, freely crossing linguistic and cultural boundaries at a time when France was a much smaller political entity than it is today. 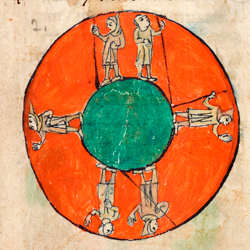 Burgwinkle, Professor of Medieval French and Occitan Literature at Cambridge, said: “French may have been brought to England by the Normans in 1066 but it was already here well before then as a language of knowledge and commerce. It served as the mother tongue of every English king for almost 400 years, from William the Conqueror to Richard II, and it was still in use as a language of royalty, politics and literature until the Tudor period, when we see Henry VIII writing love letters in French to Anne Boleyn.

“Cambridge University is home to one of the world’s finest collections of medieval manuscripts of this kind. This exhibition not only gives us a chance to display the Library’s treasures, but also reminds us how the French language has enriched our cultural past and left us with a legacy that continues to be felt in 21st century Britain.

“Medieval texts like the ones we have on display became the basis of European literature. The idea that post-classical Western literature really begins with the Renaissance is completely false. It begins right here, among the very manuscripts and fragments in this exhibition. People may not realise it, but many of the earliest and most beautiful versions of  the legends of Arthur, Lancelot and the Round Table were written in French; The Moving Word is a celebration of a period sometimes unfairly written out of literary history.”

The early phrasebook, a guide to French conversation for travellers, is the Manières de language (1396). Composed in Bury St Edmunds and one of four in existence, it provides a series of dialogues for those travelling in France that inform readers how to trade with merchants, haggle over prices, secure an inn for the night, stop a child crying, speak endearingly to your lover or insult them. It also has instructions for singing the ‘most gracious and amorous’ love song in the world. 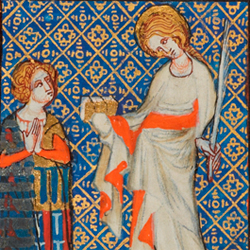 Elsewhere, perhaps some of the most impressive exhibits on display are huge medieval manuscripts that acted as compendiums of knowledge. One such example is a multilingual encyclopaedia from the 1300s featuring more than fifty texts of historical, cosmographical, literary and devotional interest. A heavily decorated volume, it is unusual for its thickness, and deals with, among other subjects, the roundness of the Earth and the force of gravity – centuries before Newton defined its laws.

In contrast, the fragment of Thomas d’Angleterre’s Roman de Tristan (Tristan and Iseut) may appear small in comparison, but its size belies its importance to the Cambridge collections.  Thomas’s Tristan romance is the oldest known surviving version of the tragic love story. His work formed the basis of Gottfried von Strassburg’s German Tristan romance of the 13th century, which in turn provided the chief source for Wagner’s famous opera Tristan und Isolde. The fragment on display, detailing King Marc’s discovery of his wife Iseut and nephew Tristan sleeping together in a wood, is the sole witness of this scene from Thomas’s text to survive into the present.

Inset images: Top, detail from a multilingual compendium of knowledge (UK, first half of 14th century). Bottom, detail from the breviary of Marie de Saint-Pol, Paris 1330-1340 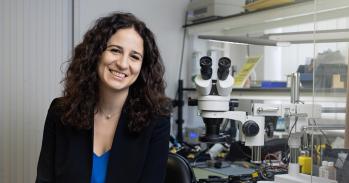 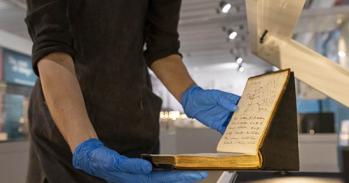 Image from a 14th century manuscript of the Romance of the rose, one of the best-known texts of the Middle Ages