Cambridge in Concrete: the boom years of Brutalism

A new exhibition at the Department of Architecture aims to expose the forgotten history of the University’s experimental post-war architecture: the ‘other’ Cambridge of raw, angular buildings and the ambition and innovation they embody.

The use of shape and materials, the raw concrete, as well as steel and brick, was a real punch in the face.

Every year, thousands of tourists flock to Cambridge to marvel at the stunning architecture of University and college buildings. So it won’t be surprising to learn that some of these buildings are studied by students and scholars of architecture the world over – but not the famous medieval spires that you might expect.

In fact, from an architectural perspective, some of Cambridge’s most fascinating buildings are to be found in dingy corners of the city. They are considered eye-sores by many people, especially when compared to centuries-old chapels and courts. But they come from a time when post-war architecture peaked in a wave of euphoric gusto, as maverick architects experimented with shape and materials to create their visions of the University of the Future.

In a period from the late 1950s to early 1970s, Cambridge experienced a boom in what is now known as brutalist architecture. Buildings such as the University Centre, Churchill College and the Faculty of History were attempts to mirror the innovation and hope of that era through dramatic, expressive shapes and exposed use of raw material. The term ‘brutalist’ derives from the French word brut, meaning rough or uncut like raw diamond, which some of these buildings resemble in their spikey angularity.

“This style embodies the laboratory of the future, a deliberate attempt to reflect the revolutionary ideas generated at the University by creating a rupture from the past,” says Dr Marco Iuliano from the Department of Architecture, who has curated an exhibition of architectural photographs shot in the 50s and 60s of many of Cambridge’s brutalist buildings.

“The use of shape and materials, the raw concrete, as well as steel and brick, was a real punch in the face. You had a public that was used to Georgian terraces and so on, and this style arrives as if alien buildings have descended from space and landed in Cambridge.”

According to Dr Iuliano, these buildings have experienced what he describes as a damnatio memoriae – a suppression of memory in the public consciousness of the important heritage and rebellious attitude they represent – because they don’t fit in to the traditional view of postcard Cambridge. 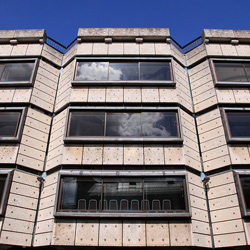 For Dr Iuliano, there aren’t any other buildings that better symbolise the challenging spirit of one of the world’s leading academic communities, although the Utopian aim and experimental nature of these building’s stark and angular appearance is in danger of being lost – something he considers vital to the story of the city and University.

“These fantastic buildings have been banished from the narrative of the University in the course of promoting a reassuring model of English tradition,” he says.

“The classic view of the Backs forms a noble depiction of the stereotype of the Arcadian and scholarly – but the innovation, freedom of thought and experimentation, which is the beating heart of any leading educational institution, can be seen clearly in the architecture of buildings such as Churchill and the History Faculty.”

Dr Iuliano’s exhibition, which opens today and runs until 25 May, sets out to revise some of the negative views of these buildings by displaying photos of them taken by some of the best architectural photographers of the day.

The photographs are from the archives of the Royal Institute of British Architects, and will be on display at the University’s Department of Architecture, which celebrates its centenary this year.

The catalyst for the flourishing of radical architecture in Cambridge was the arrival at the University of Sir Leslie Martin, who became Head of the Architecture Department in 1956. Martin was an influential British architect who had already led the design team behind the Royal Festival Hall.

“He had the capacity to get excellent minds to invest in a vision, and he became the driving force behind up-and-coming architects receiving commissions in Cambridge,” says Dr Iuliano.

The first major building of this era that Martin was involved in was the 1959 extension to his own department at Scroope Terrace, where the exhibition will be held. Over the next decade this kick-started a surge of avant-garde architecture at the University, and the exhibition features a total of 16 buildings from this period.

Among the most recognisable for staff is the University Centre, a divisive building that – love it or hate it – is not easily dismissed. In his notes for the exhibition, Dr Felipe Hernández from the Architecture Department describes the façade as “brutalist heavy”, but contrasts this with the “pleasant lightness” of the interior. “The incidence of natural light in the main dining hall conveys a sense of comfort,” he writes.

Dr Hernández, one of the exhibition’s many contributing academics, highlights the interesting spatial relationships between the floors, and the connectivity that the different levels and balconies allow, with “multiple public activities permanently integrated, giving a sense of liveliness without crowdedness”.

Another of Cambridge’s key brutalist buildings is Churchill College. Caroline Maniaque from the ENSA de Paris-Malaquais comments on the distinction between structure (rough concrete beams), enclosure (panels of bricks) and the wooden framed windows, describing this as “true to Modernist thinking” – with its exaggeration of structural elements and emphasis on functionality. 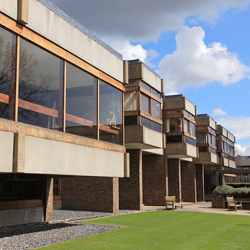 Perhaps the jewel in Cambridge’s brutalist crown is the Faculty of History building, which fills pages of architecture textbooks studied in the UK and beyond. “The History Faculty was ground-breaking, a complete schism from traditional construction,” says Dr Iuliano. “Every piece has an exact role in the fabric of the building’s composition, with the stunning glass roof creating a waterfall of light.”

The roof, described in the exhibition as a “floating cloud of glass” by Professor Claire Zimmerman from the University of Michigan, was designed by the architect James Stirling to face north, so as to catch the light in a certain way, although this was never realised as during construction the building was rotated when the owner of an adjacent property refused to sell. One of the inventors of ‘new brutalism’, James Stirling is now considered among the most important architects of the 20th century.

There is a growing awareness of how important this architecture is viewed, but its legacy is controversial. “Many of the buildings are now Grade II listed, but one suspects that not everybody in the colleges and University is enamoured with their modernist heritage,” says Dr François Penz, who co-edited the catalogue accompanying the exhibition. “In fact, the University considered demolishing the Faculty of History in 1985.”

The ambition and invention of post-war British architecture that these buildings embody has arguably faded and, for many architects, this was a golden period.

“At the time, modern architecture exemplified the adventurous, forward-looking qualities of universities,” says Dr Nick Bullock, a former Reader at the Department of Architecture. “Today, there isn’t such a clear idea of direction in architecture – these buildings stand as testament to the strength of the vision these architects had.”

‘Cambridge in Concrete: Images from the RIBA British Architectural Library Photographs Collection’ is at the Department of Architecture until 25 May. It is open from 10am to 4.30pm, Monday to Friday. For more information on this and the Department’s centenary, visit www.arct.cam.ac.uk

Research in Architecture and Photography

Iuliano partly attributes the dilution of clarity in contemporary architecture to an increased obsession with stylish imagery, and visualisations over the consideration of creating a ‘lived-in’ environment.

“Society is reflected in its architecture, and today we live in a screen age - saturated with images - and architecture has come to rely too heavily on eye-catching visuals over engagement with space and materials.”

The research that Iuliano is currently conducting focuses on this issue, and he is convening a conference at CRASSH, looking at the impact that photography has had on modern architecture - from movements such as brutalism, to the problems arising today as schools and practices lean ever more towards glossy imagery.

“In the screen age we have tools that can act as sources of creative imagination and spatial knowledge - but it is important that we explore approaches to architecture with all five of our senses, without surrogating physical experience for two dimensions.” 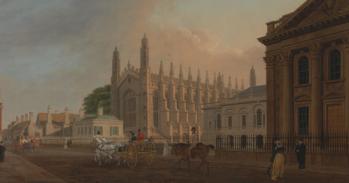 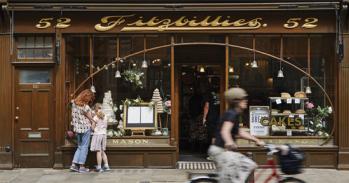