From middle-age, the brains of obese individuals display differences in white matter similar to those in lean individuals ten years their senior, according to new research led by the University of Cambridge. White matter is the tissue that connects areas of the brain and allows for information to be communicated between regions.

We’re living in an ageing population, with increasing levels of obesity, so it’s essential that we establish how these two factors might interact, since the consequences for health are potentially serious

Our brains naturally shrink with age, but scientists are increasingly recognising that obesity – already linked to conditions such as diabetes, cancer and heart disease – may also affect the onset and progression of brain ageing; however, direct studies to support this link are lacking.

In a cross-sectional study – in other words, a study that looks at data from individuals at one point in time – researchers looked at the impact of obesity on brain structure across the adult lifespan to investigate whether obesity was associated with brain changes characteristic of ageing. The team studied data from 473 individuals between the ages of 20 and 87, recruited by the Cambridge Centre for Aging and Neuroscience. The results are published in the journal Neurobiology of Aging. 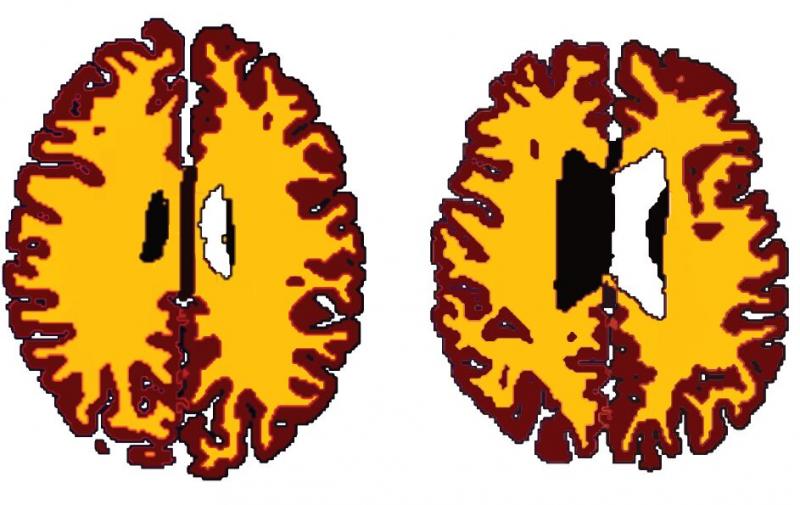 The team then calculated how white matter volume related to age across the two groups. They discovered that an overweight person at, say, 50 years old had a comparable white matter volume to a lean person aged 60 years, implying a difference in brain age of 10 years.

Strikingly, however, the researchers only observed these differences from middle-age onwards, suggesting that our brains may be particularly vulnerable during this period of ageing.

“As our brains age, they naturally shrink in size, but it isn’t clear why people who are overweight have a greater reduction in the amount of white matter,” says first author Dr Lisa Ronan from the Department of Psychiatry at the University of Cambridge, “We can only speculate on whether obesity might in some way cause these changes or whether obesity is a consequence of brain changes.”

Senior author Professor Paul Fletcher, from the Department of Psychiatry, adds: “We’re living in an ageing population, with increasing levels of obesity, so it’s essential that we establish how these two factors might interact, since the consequences for health are potentially serious.

“The fact that we only saw these differences from middle-age onwards raises the possibility that we may be particularly vulnerable at this age. It will also be important to find out whether these changes could be reversible with weight loss, which may well be the case.”

Despite the clear differences in the volume of white matter between lean and overweight individuals, the researchers found no connection between being overweight or obese and an individual’s cognitive abilities, as measured using a standard test similar to an IQ test.

Co-author Professor Sadaf Farooqi, from the Wellcome Trust–Medical Research Council Institute of Metabolic Science at Cambridge, says: “We don’t yet know the implications of these changes in brain structure. Clearly, this must be a starting point for us to explore in more depth the effects of weight, diet and exercise on the brain and memory.”

The research was supported by the Bernard Wolfe Health Neuroscience Fund, the Wellcome Trust and the Biotechnology and Biological Sciences Research Council.