A prescription drug to treat high blood pressure has shown promise against conditions such as Parkinson’s, Huntington’s and forms of dementia in studies carried out in mice and zebrafish at the University of Cambridge.

The drug will need to be tested in patients to see if it has the same effects in humans as it does in mice. We need to be cautious, but I would like to say we can be cautiously optimistic

A common feature of these diseases – collectively known as neurodegenerative diseases – is the build-up of misfolded proteins. These proteins, such as huntingtin in Huntington’s disease and tau in some dementias, form ‘aggregates’ that can cause irreversible damage to nerve cells in the brain.

In healthy individuals, the body uses a mechanism to prevent the build-up of such toxic materials. This mechanism is known as autophagy, or ‘self-eating’, and involves ‘Pac-Man’-like cells eating and breaking down the materials. However, in neurodegenerative diseases this mechanism is impaired and unable to clear the proteins building up in the brain.

As the global population ages, an increasing number of people are being diagnosed with neurodegenerative diseases, making the search for effective drugs ever more urgent. However, there are currently no drugs that can induce autophagy effectively in patients.

In addition to searching for new drugs, scientists often look to re-purpose existing drugs. These have the advantage that they have already been shown to be safe for use in humans. If they can be shown to be effective against the target diseases, then the journey to clinical use is much faster.

In a study published today in the journal Nature Communications, scientists at the UK Dementia Research Institute and the Cambridge Institute for Medical Research at the University of Cambridge have shown in mice that felodipine, a hypertension drug, may be a candidate for re-purposing.

Epidemiological studies have already hinted at a possible link between the drug and reduced risk of Parkinson’s disease, but now the researchers have shown that it may be able to induce autophagy in several neurodegenerative conditions.

A team led by Professor David Rubinsztein used mice that had been genetically modified to express mutations that cause Huntington’s disease or a form of Parkinson’s disease, and zebrafish that model a form of dementia.

Mice are a useful model for studying human disease as their short life span and fast reproductive rate make it possible to investigate biological processes in many areas. Their biology and physiology have a number of important characteristics in common with those of humans, including similar nervous systems.

Felodipine was effective at reducing the build-up of aggregates in the mice with the Huntington’s and Parkinson’s disease mutations and in the zebrafish dementia model. The treated animals also showed fewer signs of the diseases.

Studies in mice often use doses that are much higher than those known to be safe to use in humans. Professor Rubinsztein and colleagues showed in the Parkinson’s mice that it is possible to show beneficial effects even at concentrations similar to those tolerated by humans. They did so by controlling the concentrations using a small pump under the mouse’s skin.

“This is the first time that we’re aware of that a study has shown that an approved drug can slow the build-up of harmful proteins in the brains of mice using doses aiming to mimic the concentrations of the drug seen in humans,” says Professor Rubinsztein. “As a result, the drug was able to slow down progression of these potentially devastating conditions and so we believe it should be trialled in patients.”

“This is only the first stage, though. The drug will need to be tested in patients to see if it has the same effects in humans as it does in mice. We need to be cautious, but I would like to say we can be cautiously optimistic.”

The study was funded by Wellcome, the Medical Research Council, Alzheimer’s Research UK, the Alzheimer’s Society, Rosetrees Trust, The Tau Consortium, an anonymous donation to the Cambridge Centre for Parkinson-Plus, Open Targets,  the Guangdong Province Science and Technology Program, with additional support from the National Institute for Health Research Cambridge Biomedical Research Centre. 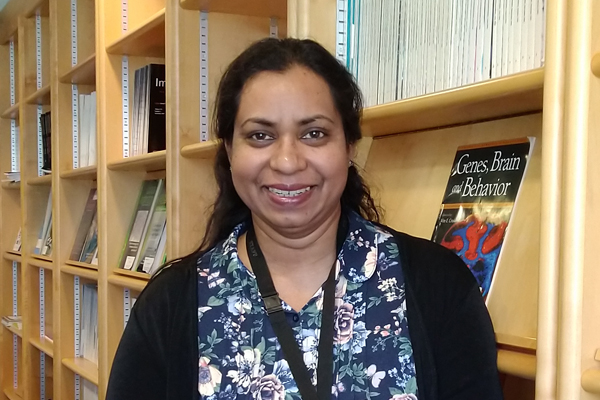 Fifteen years ago, when Farah Siddiqi was studying for a PhD in genetics, she had an encounter that was to change the direction of her career.

“During my PhD, I had the opportunity to help as a part-time research assistant for a few hours during the weekend with a professor of economics who suffered from Parkinson’s disease,” she says.

“I saw first-hand the pain and helplessness of someone suffering from a devastating neurodegenerative disease and I began to ponder how I could help reduce the suffering of others affected by these conditions.”

Farah is now part of Professor David Rubinsztein’s research group at the Cambridge Institute for Medical Research where her work focuses on neurodegenerative disorders, such as Huntington’s disease and Parkinson’s disease. She uses mice to model what is going wrong in these conditions, particularly in relation to autophagy, the body’s self-defence mechanism for disposing of unwanted matter at a cellular level.

Their research group is very diverse, with expertise from various fields, such as cell biologists and researchers who carry out in vivo work in zebrafish and mouse research.

“Cambridge is a great place to do research and our institute in particular is a great source of inspiration and knowledge. David is a great supervisor and a big support. The intellectual and practical contribution of his team of scientists made this study possible.”

Most of all for Farah, it is the sense that her research could make a difference to the lives of people living with neurodegenerative diseases that inspires her.

“My research gives me a feeling of contentment, especially when I began to observe the beneficial effects of the drug, felodipine, on mice,” she says. “It might be a little optimistic, but we really hope the effect we’ve seen in our mice can be observed in human patients. Only time will tell. We always do our best.”