High-speed videos reveal that, unlike other jumping insects, the juvenile praying mantis does not spin out of control when airborne. In fact, it both creates and controls angular momentum at extraordinary speeds to orient its body for precise landings.

As far as we can tell, these insects are controlling every step of the jump

The smaller you are, the harder it is not to spin out of control when you jump. Miniscule errors in propulsive force relative to the centre of mass results in most jumping insects – such as fleas, leafhoppers and grasshoppers – spinning uncontrollably when they jump.

Until now, scientists worked under the hypothesis that such insects can’t control this, and spin unpredictably with frequent crash landings.

But new high-speed video analysis of the jumps of wingless, baby praying mantises has revealed a technique which actually harnesses the spinning motion, enabling them to jump with accuracy at the same time as repositioning their body mid-air to match the intended target – all in under a tenth of a second.

Researchers used a thin black rod distant from the platform on which the mantises sat as a target for them to jump at.

During the jumps, the insects rotated their legs and abdomen simultaneously yet in varying directions – shifting clockwise and anti-clockwise rotations between these body parts in mid-air – to control the angular momentum, or ‘spin’. This allowed them to shift their body in the air to align themselves precisely with the target on which they chose to land.

And the mantises did all of this at phenomenal speed. An entire jump, from take-off to landing, lasted around 80 milliseconds – literally faster than the blink of a human eye.

At first, scientists believed the mantis had simply evolved a way to mitigate the natural spin that occurs when such small insects jump at speed.

On closer inspection, however, they realised the mantis is in fact deliberately injecting controlled spin into the jump at the point of take-off, then manipulating this angular momentum while airborne through intricate rotations of its extremities in order to reposition the body in mid-air, so that it grasps the target with extreme precision.

For the study, published today in the journal Current Biology, the researchers analysed a total of 381 slowed-down videos of 58 young mantises jumping to the target, allowing them to work out the intricate mechanics used to land the right way up and on target virtually every time.

“We had assumed spin was bad, but we were wrong – juvenile mantises deliberately create spin and harness it in mid-air to rotate their bodies to land on a target,” said study author Professor Malcolm Burrows from Cambridge University’s Department of Zoology, who conducted the research with Dr Gregory Sutton from Bristol University.

“As far as we can tell, these insects are controlling every step of the jump. There is no uncontrolled step followed by compensation, which is what we initially thought,” he said.

In fact, when the researchers moved the target closer, the mantises spun themselves twice as fast to ensure they got their bodies parallel with the target when they grasped it.

For Sutton, the study is similar to accountancy, only with distribution of momentum instead of money. “The mantis gives itself an amount of angular momentum at take-off and then distributes this momentum while in mid-air: a certain amount in the front leg at one point; a certain amount in the abdomen at another – which both stabilise the body and shift its orientation, allowing it to reach the target at the right angle to grab on,” he said.

The researchers tested what would happen if they restricted the ability of the mantis to harness and spread the ‘spin’ to its extremities during a jump. To do this, they glued the segments of the abdomen together, expecting the mantis to spin out of control.

Intriguingly, the accuracy of the jump wasn’t impeded. The mantises still reached the target, but couldn’t rotate their bodies into the correct position – so crashed headlong into it and bounced off again.

The next big question for the researchers is to understand how the mantis achieves its mid-air acrobatics at such extraordinary speeds. “We can see the mantis performs a scanning movement with its head before a jump. Is it predicting everything in advance or does it make corrections at lightning speed as it goes through the jump? We don’t know the answer between these extreme possibilities,” said Burrows.

Sutton believes that the field of robotics could learn lessons from the juvenile mantis. “For small robots, flying is energetically expensive, and walking is slow. Jumping makes sense – but controlling the spin in jumping robots is an almost intractable problem. The juvenile mantis is a natural example of a mechanical set-up that could solve this,” he said. 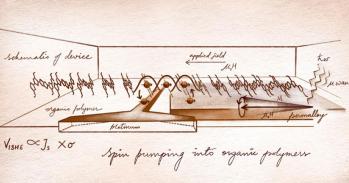 A new spin on organic semiconductors

Bats to the rescue