The discovery this summer of an impressive rock-cut tomb on a mountainside in Prosilio, near ancient Orchomenos in central Greece, will shed new light on Mycenaean funerary practices.

Finding an intact burial, let alone in a monumental tomb of the palatial period, 1370-1200 BC, makes our discovery all the more special.

For the first time, archaeologists have uncovered and carefully documented an intact burial in a monumental chamber tomb of the Mycenaean palatial period, around 3,350 years ago. Research into the material uncovered has only just begun but the discovery will expand our knowledge of Mycenaean funerals – from the treatment of the body to the selection of objects placed for burial.

The tomb is approached by an impressive rock-cut passageway, 20 m long, which leads to a deep façade some 5.40 m in height. A doorway gives access to the burial chamber. Its area of 42 sq m makes this the ninth largest known to date out of 4,000 examples excavated in the last 150 years in Greece. The partial collapse of the original chamber roof has helped to preserve the burial layer intact.

“Mycenaean chamber tombs are generally found by archaeologists to have been disturbed or looted. Most contain many burials, making an association between individual people and objects very difficult or impossible,” said Dr Yannis Galanakis of Cambridge’s Faculty of Classics, co-director of the five-year Prosilio project and an expert in Aegean archaeology.

“Finding an intact burial, let alone in a monumental tomb of the palatial period, 1370-1200 BC, makes our discovery all the more special for the knowledge we can now acquire about the tomb-using group and the practices they performed during and after the funeral.”

Once huge quantities of soil and rubble had been carefully excavated, the archaeologists found in the chamber the remains of a man, aged 40 to 50 years. He was accompanied by a selection of fine objects: jewellery made in a range of materials, combs, pins, a pair of horse bits, arrowheads, a bow, a sealstone, a signet ring, and a group of tinned clay vessels of various shapes.

“The size and quality of construction of the tomb correlates well with the discovered objects, all of which speak of a man from the upper echelons of the local society,” said Galanakis.

“Initial examination of the finds suggests a conscious selection by the tomb-using group responsible for the burial’s preparation of the objects interred with the body. The impression we get is that the tomb was built during the man’s life. It is indeed astonishing, and a very rare instance, to be able to excavate the remains of the man for whom the tomb must have been constructed.”

Galanakis was struck by the placement of different shapes and types of jewellery with a male burial, which challenges the commonly held assumption that jewellery in Mycenaean Greece should be chiefly associated with female burials. “It also chimes with the discovery of considerable quantities of jewellery by the University of Cincinnati in 2015 in the burial of the ‘griffin warrior’ at Pylos, which is older by a century than that of the man at Prosilio.”

Striking too is the absence of painted pottery, with the exception of two painted stirrup jars, often taken to contain aromatic oils and which may be associated with the final use and closure of the tomb around 1300 BC. Painted pottery is very common in Mycenaean tombs. Its absence from the initial burial is further confirmation of the conscious choices made in the selection of objects placed alongside this man’s burial at Prosilio.

The Prosilio team believes that this monumental structure, known as tomb 2, is associated with ancient Orchomenos, a major centre which controlled northern Boeotia, a region of Greece. Orchomenos, which is only 3.5 km away, oversaw in the 14th and 13th centuries BC the partial drainage of Lake Kopaïs – once the largest lake in Greece – a project that yielded a sizeable area of land for agriculture.

At its peak (1350-1250 BC), Orchomenos’s power is reflected in its most famous monument, the tholos tomb ‘of Minyas’, first excavated by Heinrich Schliemann in the 19th century and comparable only in size and refinement to the tholos tomb ‘of Atreus’ at Mycenae.

“Despite the tholos ‘of Minyas’ and some earlier important discoveries by Greek and German teams in the area, we still know very little about ancient Orchomenos. We hope that the continuation of our project will help us understand better Orchomenos’s position in the region and learn more about its population and their practices,” said Galanakis.

“The discovery this year enables us to ask questions such as why certain objects were selected for burial while others were not – and what kind of rituals were performed as part of funerary and post-funerary practices. The finds will spark new discussions about the role of burials in Mycenaean life during the palatial period.”

The five-year Prosilio project is in its first year. In subsequent years, the team aims to excavate more tombs and study and publish the archaeological data collected. The initiative is a collaboration between the Ephorate of Antiquities of Boeotia and the British School at Athens. Its directors are Dr Alexandra Charami (Director of the Ephorate of Antiquities of Boeotia) and Dr Yannis Galanakis, (Senior Lecturer in the Faculty of Classics and Director of the Museum of Classical Archaeology, University of Cambridge). 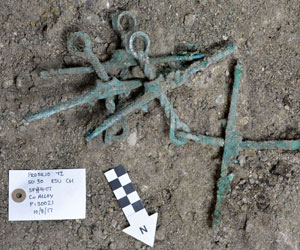 The Prosilio team also includes Kyriaki Kalliga, archaeologist of the Ephorate of Antiquities of Boeotia, Dr Panagiotis Karkanas, geo-archaeologist and Director of the Wiener Laboratory at the American School of Classical Studies in Athens, Dr Ioanna Moutafi, bio-archaeologist and senior researcher at the Wiener Laboratory, Emily Wright, field supervisor and PhD candidate in Archaeology at the University of Cambridge, and Professor Ann Brysbaert of the University of Leiden and Principal Investigator of the ERC project SETinSTONE. Some 25 students, specialists and workers helped in this year’s fieldwork.

The Prosilio project was conducted with permission from the Hellenic Ministry of Culture & Sports and Ioannis Papadopoulos, the owner of the land. The project was generously funded by, among other sources, the University of Cambridge (Faculty of Classics, the McDonald Institute, the Cambridge Humanities Research Grant scheme, and Sidney Sussex College), the Institute for Aegean Prehistory (INSTAP) and the British School at Athens.

Excavation of a Myceneaen tomb at Prosilio in central Greece, summer 2017