A beast with four tails

The Milky Way galaxy continues to devour its small neighbouring dwarf galaxies and the evidence is spread out across the sky.

We have long known that when small dwarf galaxies fall into bigger galaxies, elongated streams, or tails, of stars are pulled out of the dwarf by the enormous tidal field.

A team of astronomers led by Sergey Koposov and Vasily Belokurov of Cambridge University recently discovered two streams of stars in the Southern Galactic hemisphere that were torn off the Sagittarius dwarf galaxy. This discovery came from analysing data from the latest Sloan Digital Sky Survey (SDSS-III) and was announced in a paper released today that connects these new streams with two previously known streams in the Northern Galactic hemisphere.

"We have long known that when small dwarf galaxies fall into bigger galaxies, elongated streams, or tails, of stars are pulled out of the dwarf by the enormous tidal field," said Sergey Koposov.

The Sagittarius dwarf galaxy used to be one of the brightest of the Milky Way satellites. Its disrupted remnant now lies on the other side of the Galaxy, breaking up as it is crushed and stretched by huge tidal forces. It is so small that it has lost half of its stars and all its gas over the last billion years.

Before SDSS-III, Sagittarius was known to have two tails, one in front of and one behind the remnant. Previous SDSS imaging had already found the Sagittarius tidal tail in the Northern Galactic sky in 2006 and revealed that one of the tails was forked into two.

"That was an amazing discovery," said Vasily Belokurov, from the University’s Institute of Astronomy, "but the remaining piece of the puzzle, the structure in the South, was missing until now."

Sergey Koposov and colleagues analysed density maps of over 13 million stars in the latest release of Sloan Digital Sky Survey data, including the crucial coverage of the Southern Galactic sky. The new data show that the Sagittarius stream in the South is also split into two, a fatter and brighter stream alongside a thinner and fainter stream. This brighter stream is more enriched with iron and other metals than its dimmer companion. Because each generation of stars makes and distributes more metals into the next generation, the Cambridge astronomers concluded that the brighter stream is younger than the older, fainter one.

"Sagittarius is like a beast with four tails," observed Wyn Evans, from the Institute of Astronomy, Cambridge University.

No one knows the mechanism that caused the splitting of the tidal tails. However, scientists believe that perhaps the Sagittarius dwarf galaxy was once a part of a binary galactic system, similar to the present day Large and Small Magellanic Clouds. Each of these could have produced a leading and trailing tail on falling into the Milky Way Galaxy, yielding four in all.

But co-author Geraint Lewis of Sydney University has another idea. He says "Perhaps the Sagittarius dwarf galaxy has suffered an encounter with an object in the game of Galactic billiards. Maybe a collision with a massive clump of dark matter, or even another satellite galaxy, has split each of the streams into two."

A final theory suggests that, just as meteors have spread into different streams through evolution in the Solar system, debris from Sagittarius may have spread into different streams at different points in time. Different epochs may suffer different amounts of precession in the Galaxy, causing the split streams. "I have been running hundreds of simulations of the disruption of the Sagittarius dwarf and this idea looks very plausible," commented Jorge Penarrubia of the IAA, Granada, who was also involved in the study.

Whatever the explanation, SDSS-III has provided a wealth of new information on the engorgement of the Sagittarius galaxy. The disruption of smaller galaxies has occurred many times in the history of the Milky Way and other galaxies like ours throughout the Universe.

The wagging of the four tails of Sagittarius will shed new light on both the structure and formation of the Milky Way. 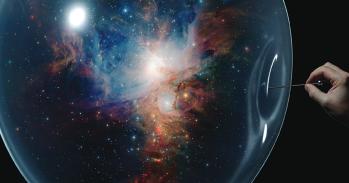 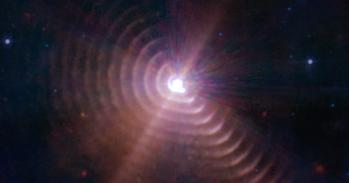