Why be human when you can be otherkin?

As social beings, a sense of identity plays an important role in our relations – and in our own happiness. But identity doesn’t have to be narrowly human. In an essay looking at the groups that exist on the edge of conventional boundaries, and are often subject to prurience and ridicule, Pedro Feijó considers those who feel different, other than human.

I thought it would be worth exploring the worlds of those who clash with one central dichotomy: humanity and non-human animality.

In May thousands of people watched a documentary called The Secret Life of the Human Pups. The film accompanied Spot and friends (men who dress as dogs) as they travelled to a beauty pageant. Its appearance came just a couple of months after the publication of Being a Beast, a book in which veterinarian/barrister Charles Foster describes living in the wild as a badger, fox and stag. The protagonists of film and book may have little in common but they share a desire to escape the narrowness of being human.

People who identify as other than human have been described (and describe themselves as ‘animal-people’, ‘lycanthropes’, ‘therianthropes’   and, most recently, ‘otherkin’. Together they have a history stretching back to antiquity: witness the fabulous beasts which embellish the margins of medieval manuscripts. It was in the course of researching the role of monsters and monstrosity in Renaissance Europe, and the ‘animalesque’ affinities of 16th-century Portuguese witches, prosecuted by the Catholic Inquisition, that researcher Pedro Feijó (MPhil History and Philosophy of Science) decided to lean into the worlds of those who, half a millennium later, inhabit the borders of animality and the margins of humanness. 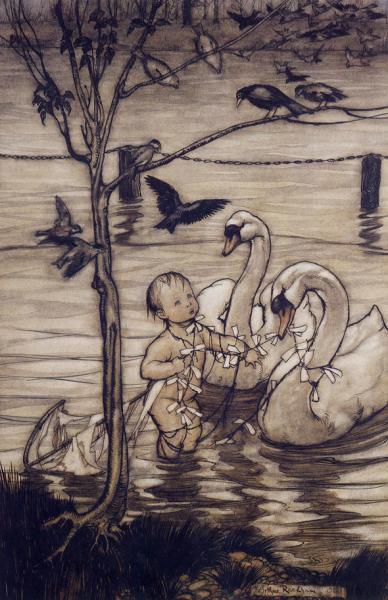 Feijó embarked on an exploration of people who are more, or other, than human – and how such people have been perceived and treated by those around them. “We have witnessed, in the last half a century, an explosion of politics grounded on new identities, and on their overcoming. People have been experimenting with and transgressing the limits of what it means to be a woman, of what it means to have a gender, a sex, or a sexual orientation,” Feijó says.

“Across the western world, individuals and collectives are defying our identity as organic beings, in contrast with mechanical ones, and exploring cyborgism. Social movements of trans and disabled people started questioning what it means exactly to be an able body. The neuro-diverse and BIID (Body Integrity Identity Disorder – people who would prefer to be ‘disabled’) have followed in the same footsteps. I thought it would be worth exploring the worlds of those who clash with one central dichotomy: humanity and non-human animality.”

Feijó’s essay Doctors Herding Cats: The Misadventures of Modern Medicine and Psychology with NonhuMan Identities offers a fascinating insight into questions of identity and how they have been mediated. There is no shortage of tales and testimonies about people becoming animals. “The Biblical King Nebuchadnezzar, king of Babylon, roamed the land for seven years as an ox and countless other tales turn on human to animal transformations,” writes Feijó. “During the 18th century, accounts of lycanthropy were left behind as the European Enlightenment movement classified them as irrational and obscure. But people who belong to a kind other than the human seem to have sprung from the blind spots of modernity, and have grown strong and visible for the last four decades.”

Feijó points to a medley of converging influences – among them folklore, spiritualism, Tolkien’s mythopoeia, science fiction, UFO cults and the New Age. By the 1970s, elf groups were well established, and strongly non-apologetic. Explaining their rationale, one of these groups, the Silver Elves, wrote: “We are an elusive people who have learned through time to be both hidden and secretive… yet we accomplish this by being both open and obvious.  People upon hearing that we are elves simply do not believe their own eyes and ears.  They think that we are joking and we share their laughter.”

In the 1990s, with the beginning of the digital revolution, R’ykanadar Korra’ti founded the niche publication Elfkind Digest, initially as a mailing list. “This is not … about role-playing or role-playing games: we’re elves. Deal with it,” wrote Korra’ti. “Initially I expected only to find other elves; as it turned out, I found a large number of people with a large number of self-identifications.”

The term ‘otherkin’ was coined by a contributor to Elkind Digest. “I got tired of typing elf/dragon/orc/etc-kin and just used otherkin,” wrote Torin. As access to the internet spread beyond the professional middle classes, the otherkin community multiplied and diversified. “The first decade of the 21st century witnessed a huge diversification in terms of assumed sexual and gender preferences and identities – especially once otherkin groups migrated to the blog-hosting site, Tumbr,” says Feijó.

In his essay, Feijó highlights the contrast between communities which embrace the experiences of otherkin and the medical corpus which regards non-human identification and behaviour as a subject of inquiry insofar as it is a problem to be treated. He observes: “Psychiatry sees individual patients, otherkin sees a community and a safe space. Where medicine has seen a syndrome to be explained, otherkin have seen affinities with no need for a unified metaphysical justification.”

Accounts of therianthropy (the psychiatric term for the delusional state of being an animal) exist in 19th century medical literature. Feijó cites an account of a man who behaves as a carnivorous animal in a French asylum: “he walks on all fours, picks up everything he finds in his teeth, and in the same way he uses his teeth to dig up carrots, roots, etc., that he then carries to a corner and swallows, without standing up.” Another source describes a patient who “thinks she has become a dog, a bull, a man: all the parts of her body are deformed, enlarged: she doesn’t recognise herself anymore”.

In the 1960s, heterodox psychological and psychiatric trends began to make space for a very different kind of understanding. The psychiatrist RD Laing, for example, known for his consideration of delusions as valid accounts, gives the example of a friend who, some years earlier, had a psychotic episode in which he had “a voyage into inner space and time” and “at one time I actually seemed to be wandering in a desert landscape as if I were an animal … a kind of rhinoceros or something like that and emitting sounds like a rhinoceros.”  Laing used this example to point out the importance of allowing trips as therapeutic experiences.

But tolerance of difference is shallow – and acceptance of people who feel different, and visibly don’t conform, is frequently tinged with ridicule. Their perceived absurdity was capitalized not only for diagnostic purposes, but also for mercantile ones. “Post-1970s medical literature presents lycanthropes as curiosities, as fetishized subjects and ultimately as immaterial commodities. Lycanthrophy is written about not so much for reasons of intellectual inquiry but because it sells. Something analogous happened in the general online community, where otherkin are routinely laughed at,” says Feijó. 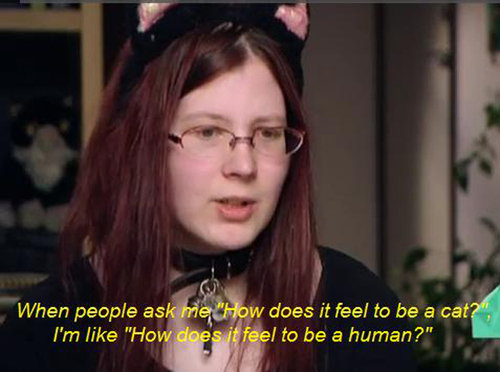 “The problem is that the ridicule seems to reside elsewhere: modern psychiatry and psychology have not been able to keep up-to-date with new post-human perceptions, which have been unable to admit the problems of distinguishing between a phenomenological symptom and a voluntary behaviour, and furthermore which have chosen to pathologize and ruin the lives of many through the insistence on an obsolete paradigm, while the same people could have found a supporting community off- and online.”

The narratives of those who share the rejection of their full humanity and an entangled sympathy with other beings have taken a new critical role in the last half century. They pose a simple, uncomfortable question: what does it mean to be human? Feijó proposes: "Following the struggles of those who have seen themselves excluded from mankind, it might be time to ask if the diagnosis didn’t have the wrong focus all along: in the 20th century. Perhaps it could be said that humanity itself is a case of species dysphoria?"

Angels have the phone box