What makes a sand dune sing?

When solids flow like liquids they can make sand dunes sing, and they can also result in a potentially deadly avalanche. Cambridge researchers are studying the physics behind both of these phenomena, which could have applications in industries such as pharmaceuticals, oil and gas.

A sand dune may look like a monolithic mass of sand, but there are multiple layers and structures within it

For Marco Polo, the desert could be a spooky place, filled with evil spirits. Writing in the 13th century, he described the famous singing sands, which “at times fill the air with the sounds of all kinds of musical instruments, and also of drums and the clash of arms.” But the low, loud rumbles coming from the dunes were not the work of spirits. They were the work of physics.

As grains of sand slide down the side of certain dunes, they create vibrations that can be heard for miles around. The sand avalanches trigger the dune’s natural resonance, but only when conditions are just right. It can’t be too humid, and the grains of sand need to be just the right size and contain silica. Only then will an avalanche cause the dunes to start singing.

An avalanche, whether it’s made of sand or snow, is an example of a granular flow, when solid particles flow like liquids, colliding, bouncing around, interacting, separating and coming back together again. Granular flow processes can be found everywhere from the world’s highest mountains to your morning bowl of cereal.

Dr Nathalie Vriend, a Royal Society Dorothy Hodgkin Research Fellow in the Department of Applied Mathematics and Theoretical Physics, is a specialist in granular flows. Her PhD research at the California Institute of Technology unravelled some of the physics at work in the same singing sands that mystified Marco Polo. At Cambridge, her research focuses both on sand dunes and on avalanches, and how to quantify their behaviour, which can have practical applications in industries including pharmaceuticals, oil and gas. Vriend’s work relies as much upon laboratory experiments and fieldwork as it does on mathematical models. 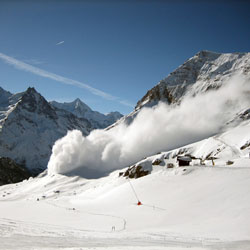 “An avalanche can behave as a solid, liquid or gas, depending on various factors, which is what makes them so difficult to model mathematically,” says Vriend. “For me, modelling their behaviour starts with observation, which I then incorporate into a model – it’s nature where I get my inspiration from. That, and curiosity – I see something and I want to try to explain it.

“Since there are particles which collide and interact in a granular flow, there is a certain degree of randomness to the process, so how do you incorporate that into a model? You try to translate what you’re seeing into a physical description, and then you perform numerical or theoretical simulations to see if the behaviour you get from the models is the same as you observe in nature.”

Despite their somewhat chaotic nature, avalanches and other types of granular flows share some distinct patterns. Owing to a phenomenon known as segregation, larger particles tend to rise to the top in an avalanche, whereas smaller particles sink to the bottom, falling into the gaps between the larger particles. A similar phenomenon can be seen in your breakfast cereal: the smaller, tastier bits always seem to end up at the bottom of the bowl. Larger grains are also pushed to the side and the front, forcing the flow of the avalanche into channels.

Similar processes are at work in sand dunes. As wind blows across a dune, there is segregation of the individual grains of sand, as well as small avalanches taking place on the granular scale. But for a sand dune that is 40 m high, there are also processes taking place on the macro scale. The entire dune itself can move and race across the desert floor. Small dunes migrate faster than large dunes, as if playing a “catch me if you can game”. 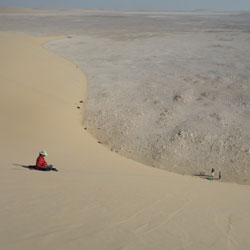 A cross section of a typical sand dune would reveal a slope on one side of a ridge, and a sharp drop on the other. As the wind blows across the dune, it pushes grains of sand up the slope, where they gather in a heap. When the heap gets too big, it becomes unstable and tumbles over the other side, causing an avalanche, eventually coming to a stop. This process happens again and again, causing layers to form within the dune. “A sand dune may look like a monolithic mass of sand, but there are multiple layers and structures within it,” says Vriend.

How does this understanding of the anatomy and movement of a sand dune translate into practical applications? Understanding granular flows can be useful in the pharmaceutical industry, where two different active ingredients may need to be mixed properly before a pill is made. Granular flows are also highly relevant to the oil and gas exploration process, and with this in mind Vriend is working with Schlumberger, the oilfield services company.

Sand dunes are major sources of noise in seismic surveys for oil and gas in deserts, which are conducted to probe the location and size of underground oil and gas reserves. The surveys use an acoustic pulse from a source and carefully placed receivers at different points to listen to the signal that is received, which can then be used to calculate what is hidden underground. The problem encountered by surveyors is that the sand dunes are composed of loose sand and therefore have a much lower wave velocity than the rocky desert floor, and as a result they act as traps of wave energy: the energy keeps reverberating and creates a source of noise in the post-processing of the seismic surveys. As part of a secondment at Schlumberger, one of Vriend’s PhD students is performing numerical simulations to understand the origin and features of this noise.

Another industrial problem that Vriend’s group is currently working on is the phenomenon of ‘honking’ grain silos. As grains are let out of the bottom of a silo, the friction of the pellets on the walls of the silo makes a distinctive ‘honking’ sound. Annoying for the neighbours perhaps, but hardly dangerous. However, when the vibrations get loud enough, it can cause a resonance within the silo, leading to structural failure or collapse. Vriend’s students are attempting to understand what affects the way that silos honk, which could someday be used to minimise noise, or even to prevent collapse.

The phenomenon behind honking silos on a busy farm is similar to that which causes massive desert sand dunes to sing, although one could be perceived as an annoyance while the other is considered captivating. For Vriend, however, it’s the real-world observations and the opportunity to spend time in nature that motivate her.

She explains: “What I love about my research, whether it’s looking at silos or avalanches, is that you can observe it, see it, feel it, touch it.”