What is a unicorn’s horn made of?

The Cambridge Animal Alphabet series celebrates Cambridge’s connections with animals through literature, art, science and society. Here, U is for Unicorn. Despite being notoriously difficult to catch, they feature on maiolica plates, in 15th century heraldry, and in early recipes for anti-poison.

At first glance, it might be a horse with wavy mane and swishing tail – but then you notice the long, twisted horn protruding from its forehead. Looking at this magnificent animal more closely, you see that its feet are most unlike horses’ hooves, cloven into digits almost like human feet.

No-one knows exactly what a unicorn looks like but the artist who decorated this maiolica plate (in the collection of the Fitzwilliam Museum: acc. no. C.86-1927) imagined a creature on a grand scale. The youthful rider, who sits astride a richly embroidered cloth, is dwarfed by the impressive size of his prancing steed.

The plate was originally part of a series, made in Italy in the early 16th century, depicting Caesar’s triumphal entry into Rome after the end of the second Punic War. The scene is taken from a set of woodcuts and the letter H marks its place in the narrative. The plates are thought to have been produced by a workshop in Cafaggiolo, not far from Florence.

The bold design is proof that unicorns have not always been the shy and gentle creatures that medieval bestiaries and 20th-century children’s literature would have us believe. In fact, they were a ferocious addition to the ranks of mythical beasts in classical texts. Pliny the Elder described the unicorn thus:

“… a very fierce animal called the monoceros which has the head of the stag, the feet of the elephant, and the tail of the boar, while the rest of the body is like that of the horse; it makes a deep lowing noise, and has a single black horn, which projects from the middle of its forehead.”

From these chimerical beginnings, the unicorn took a variety of directions in terms of both appearance and symbolism. It became an emblem for Christ in the Middle Ages and was often used in heraldry from the 15th century onwards. The lion and the unicorn are the symbols of the UK with the lion representing England and the unicorn Scotland. 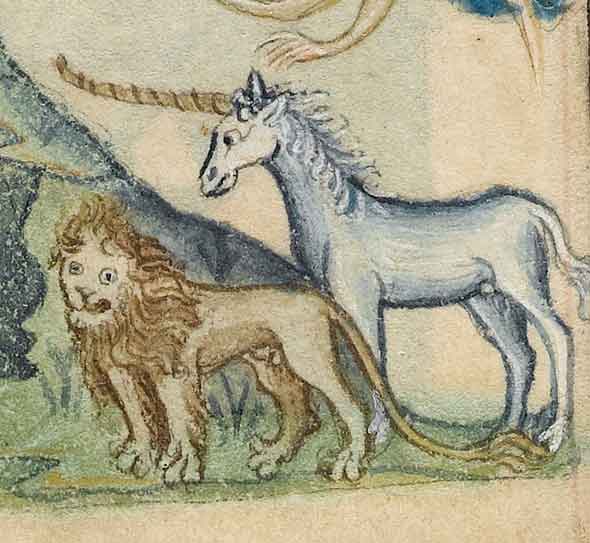 The Fitzwilliam Museum collection abounds with unicorns. Some of the most beguiling appear in ‘books of hours’ and ‘bestiaries’. Freelance researcher, Robert Lloyd Parry, investigated just a few of them in the course of researching an exploration of signs and symbols in art for the Fitzwilliam’s website.

A Flemish Book of Hours, dating from 1526, shows the Annunciation. Mary sits in a walled garden (symbolic of her virginity) and a white unicorn rests its horn in her lap. God the Father peeps out of a burning bush behind her and, beyond the garden, Gabriel blows a hunting horn. 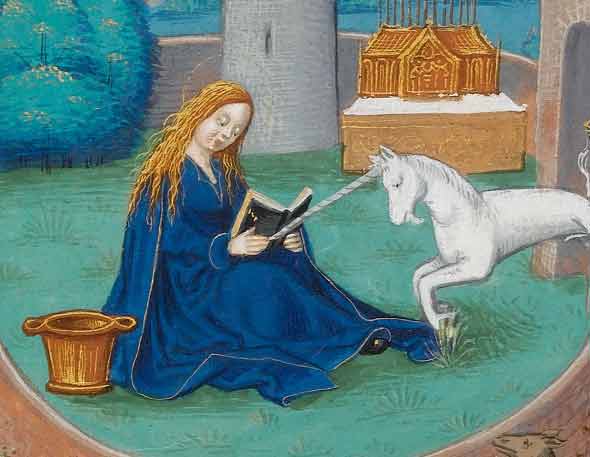 A 15th-century illuminated manuscript – a French translation of a 13th-century encyclopaedia – depicts a unicorn in the Garden of Eden before the Fall of Man. Lloyd Parry writes: “God the Father holds the right hands of Adam and Eve with angels and animals looking on. A stream emerges from the ground at God’s feet. The unicorn’s horn points towards its clear waters – a reference perhaps to its legendary abilities to purify water.“

A magical creature is likely to have magical powers: unicorn horn is associated with purity. Natalie Lawrence, a PhD candidate in the Department of History and Philosophy of Science at Cambridge, is researching early encounters with exotic creatures – including the opportunities they presented for traders and apothecaries.

Lawrence’s work offers fresh insights into how protective and curative powers were attributed to natural substances, at a time when there was widespread fear of poisoning. The 17th-century recipe for one anti-poison, ‘Banister’s Powder’, called for unicorn horn, ‘east bezoars’ and stags heart ‘bones’. Members of the nobility purchased tableware and cups with ‘unicorn horn’ bases to avoid being poisoned, and the Throne Chair of Denmark (constructed 1662-1671) is even made of ‘unicorn horn’. 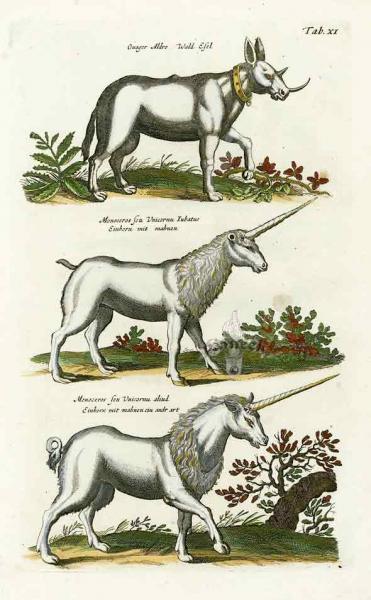 Powdered medicinal ‘unicorn horn’ was usually walrus ivory, rhinoceros horn or narwhal tusk, sometimes called ‘sea unicorn’. The problem of distinguishing ‘true horn’ was commented on by the French doctor, Pierre Martin La Martinière (1634-1690), who described the difficulty of knowing ‘what Creature the right Unicorn… there being several Animals the Greeks call Monoceros, and the Latines Uni-Cornis’, from a variety of terrestrial quadrupeds and ‘serpents’, to the ‘sea-elephant’ (walrus).

Materials such as walrus ivory, when identified as such, could possess similar qualities to unicorn’s horn. One apothecary, a ‘Mr Alexander Woodson of Bristoll’, ‘a skilful Phisition’, had ‘one of these beasts teeth, which ‘he had made tryall of’ by ‘ministering medicine to his patients, and had found it as soveraigne against poyson as any Unicornes horne’.

The implicit links between unicorns and these other beasts did not diminish horns’ perceived medical powers. The Danish scholar Ole Worm (1588-1655) debunked the existence of the terrestrial unicorn in a public lecture using the skull of a narwhal, but he still attested to the horn's medical potency. Worm described experiments where poisoned animals had been revived by administration of powdered ‘sea unicorn’ horn.

By the early 18th century, ‘unicorn horns’ were much less prized in collections, losing some of their status as ‘rarities’, as high-volume importation into Europe flooded the market. But the appeal of the unicorn itself, especially incarnations such as the fleet-of-foot and mercurial creature of CS Lewis’s Narnia books, has never waned.

Perhaps this is because, most famously, they have always been extremely hard to catch.

Next in the Cambridge Animal Alphabet: V is for an animal that is responsible for up to 94,000 deaths a year, but is also being used to help develop treatments for diseases such as haemophilia, deep vein thrombosis, pulmonary embolism, heart attack and stroke. 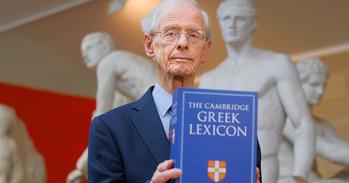