Every object in the Museum of Archaeology and Anthropology tells not just one but many stories. The Museum’s collections chronicle two million years of human history, revealing the diversity of human life over millennia and the ongoing dynamism of world cultures in the present. Many individual artefacts reflect histories and cultures that are contested.

Each collection is a tangled formation of material culture and human intention. We’re dealing not with lifeless data, but with people’s interests in making, using, collecting, interpreting, classifying and reclaiming things.

One of the overarching mottos and principles of the Museum is “Look. Look again.” Spread over three floors, with ground-breaking exhibitions and one million objects in its stores, the Museum presents endless opportunities for visitors and researchers to look, then look again.

Among its collections are objects that speak to us of love and loss, conflict and war, and life and death. These objects of material culture communicate to us in many different ways – if we learn how to observe and listen to the myriad stories they have to tell.

But what is the place and purpose of ethnographic museums in the UK in the 21st century? As time marches us further and further away from Britain’s own contentious history of exploration and the Empire, can and should we be comfortable with such repositories – born from an imperial legacy that painted a quarter of the globe red?

For Professor Nicholas Thomas, Director of the Museum of Archaeology and Anthropology (MAA), the answers are clear. He believes that at a time when questions of cultural and religious differences are highly contentious, the renewal of displays that stimulate cross-cultural curiosity are more important than ever.

“The objects in MAA are not ‘dead’ objects,” he says. “The Museum is a place that brings its collections to life through its interactions with the public as well as the indigenous communities from which these artefacts originate, not to mention the world-class research that scholars and academics from Cambridge and around the globe undertake here every day.

“Museum collections are not just a mass gathering of objects, but a complex set of relationships, things, documents, images and people. Each collection is a tangled formation of material culture and human intention. We’re dealing not with lifeless data, but with people’s interests in making, using, collecting, interpreting, classifying and reclaiming things.

“That’s what makes our collections in particular so rich; it’s the web of information that might lie behind a single object of encounter that ensures such objects resonate to this day.”

MAA’s collections are extraordinary for a museum of its size. Fewer than 1% of its objects can be on display at any given time, but the stores are actively researched by a bewildering range of global scholars.

The Museum contains significant material from all over the world, with some of its best-documented collections hailing from the Pacific, including the world’s most important collection from the first voyage of Captain James Cook.

Cook’s three voyages of 1768–1780 were formative for the histories of exploration, anthropology, natural history and the Empire, and marked a new epoch in contacts between Europeans and indigenous peoples across the Pacific Islands and around the Pacific Rim.

Bequeathed by Cook’s patron Lord Sandwich to Trinity College in Cambridge and transferred to MAA during the early 20th century, the collection is probably the first extensive, systematically made ethnographic collection from any part of the world.

Recent projects have included research published in the leading archaeological journal Antiquity on the origins and history of a unique and enigmatic sculpture from the Cook collection. The carving, which features two double humanoid figures and a quadruped, is one of the Museum’s best-known objects and was long attributed to the Austral Islands in French Polynesia.

However, wood isotope analysis reveals that it is in fact from Tahiti, and carbon dating suggests that the work was 50–80 years old by the time Cook acquired it, changing our understanding of Oceania’s art history. Probably an element of a gateway into a sacred precinct, the carving was most likely preserved as a relic before being presented to the explorer. Its gifting implies the wish to build relationships with visitors who were perceived as powerful partners at that time.

It is often assumed that artefacts in ethnographic collections were appropriated from the communities that created them. Although some objects were indeed looted, many collections were created more collaboratively through trade and deliberate gift-giving.

MAA also holds important material from Uganda, brought to Cambridge primarily by the prominent missionary and ethnographer John Roscoe. Roscoe’s donations were supplemented by artefacts such as the necklet shown here. Worn by a royal bodyguard, it was gifted in 1902 by Apolo Kagwa, Katikiro (Prime Minister) of Uganda and the author of important anthropological studies, who travelled to England for the coronation of Edward VII.

Sixty years later, Abu Mayanja, a Cambridge law graduate and Minister for Education in the newly independent nation, asked the University to return certain sacred objects, which were repatriated, and remain on display in the Uganda Museum today.

“I think we see the repatriation question as an opportunity to open up a dialogue – rather than a threat,” adds Thomas. “MAA has a distinguished record in engaging with indigenous people in a sustained way. We have had many extended engagements and collaborations around research that have been very rewarding for all the parties involved. It’s also been an extremely positive experience to share our collections through lending to major exhibitions in the countries of origin.

“Another more meaningful way of working with indigenous communities has been projects such as ‘Pacific Presences’, funded currently for five years through a European Research Council advanced grant. Work on material culture almost inevitably involves international collaboration, and we have done so with many small, experimental exhibitions, sharing photographs with communities in the Pacific, as well as through work with partner museums across Europe.

“Benin bronzes notoriously exemplify colonial confrontation and conflict in Africa in the 1890s. We try at once to be upfront about difficult histories, and to communicate the complications of the histories. Like most museums, we receive very few outright repatriation requests. Many indigenous peoples prioritise working together. They see these objects as ambassadors for their cultures.”

Inset image: Sculpture of two double humanoid figures and a quadruped, one of a hundred artefacts brought back by Captain James Cook from his first voyage on the Endeavour, and presented by him to his Admiralty patron Lord Sandwich, who donated the collection to Trinity College, which in turn transferred the artefacts to the Museum of Archaeology and Anthropology in the early 20th century. Credit: Museum of Archaeology and Anthropology. 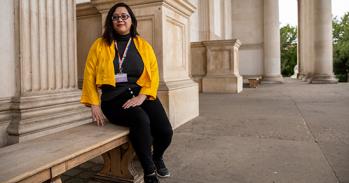 Necklet worn by a royal bodyguard, gifted in 1902 by Apolo Kagwa, Katikiro of Uganda

Credit: Museum of Archaeology and Anthropology