Spinal injury and ‘biorobotic control’ of the bladder

There are many challenges facing people with spinal cord injury – and walking again is often the least of their problems. Cambridge research could help patients take control of their lives once more.

This should make rehabilitation – teaching the brain to do useful things again – dramatically more successfull.

What he means by this is that four out of five spinal cord injuries happen to men, and the most common age group is early adulthood. “Men are not good at assessing risk at that age,” he says. “Females are much more sensible.”

It is perhaps not surprising, then, that when asked about their priorities, most quadriplegic people will select a return of sexual function as second after the use of arms and hands. Third on the list, above being able to walk, is a return of bladder and bowel control. “Way down the list is walking, because wheelchairs work reasonably well and patients can get used to using them,” says Fawcett, who heads the John van Geest Centre for Brain Repair at Cambridge.

Restoring bladder and bowel control is a particular challenge, however. Currently, patients have to fill their bladder with botulinum toxin (botox) to paralyse it and catheterise themselves several times a day. This may be the simplest method, but catheterisation can cause infection and scarring in the urethra. 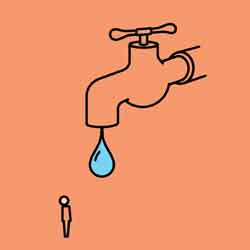 Instead, Fawcett is developing a device based on the ‘Brindley device’, named after physiologist Giles Brindley, who trained at Cambridge after the Second World War. The Brindley device is an implant to which an external stimulator is applied manually, causing the bladder to contract and empty itself. It has been used in thousands of patients, but it, too, is not without problems: it necessitates severing sensory nerves from the pelvis into the spinal cord, causing weakening of the pelvic muscles – and loss of sexual function. (For most male patients, Viagra can at least help them maintain an erection, but this is only half the problem. ‘Well OK, doc,’ they say, ‘you’ve given me an erection, but what’s the use if I can’t feel it?’”)

Fawcett and colleagues are developing a ‘biorobotic’ version of the Brindley device that can read signals from the sensory nerves in the pelvis, rather than requiring them to be cut. These signals would stop the bladder emptying itself at embarrassing times, tell the patient how full the bladder is, and allow them to use the electronics to empty it.

The ability to record signals from individual nerves has applications beyond just bladder control: Fawcett envisioned the technology as enabling patients who had lost a limb – such as soldiers losing arms or legs – to control robotic limbs. “The limbs themselves are quite sophisticated,” he says, “but what doesn’t work at all well is their interface with the nervous system.” The technology required for recording signals for a whole limb has proven to be extremely complicated, so the team is looking at the bladder-control device as a simpler demonstration of a proof of concept.

Biorobotics will be one focus of a proposed new Spinal Injury Research Centre to be based at Addenbrooke’s Hospital. Although still at the very early planning stages, the Centre will capitalise on Cambridge’s position as the regional trauma centre for the East of England (even though a lack of facilities means spinal injury patients have to be sent to Stoke Mandeville near Oxford for rehabilitation).

A simplified version of the adapted Brindley device has so far been trialled in around 50 dogs, in whom spinal cord injury is surprisingly common, particularly in dogs with longer spines, such as dachshunds. Many owners of injured dogs want to keep their pets but, as Fawcett explains, “the dogs are perfectly happy to paddle around with wheels under their back legs, but they do so dribbling urine around your house.”

In fact, a randomised controlled trial in 2013 showed that injured dogs may even be able to do away with their wheels. Professor Robin Franklin from the Wellcome Trust-Medical Research Council Cambridge Stem Cell Institute showed that transplanting cells found in the nasal cavity, known as olfactory ensheathing cells, into the injured spine could help restore movement to the previously paralysed limbs. Although the cell transplant did not restore bowel or bladder control, it was, says Franklin, “a landmark study” that offers the promise of translation into humans. Franklin’s colleague Dr Mark Kotter is currently seeking funding to carry out a trial in humans.

But as Fawcett says, the priority among injured patients is to recover use of their upper limbs. Spinal cord injury causes damage to motor nerve fibres travelling from the brain and to sensory nerve fibres travelling to the brain. Both are structurally different and need to be coaxed to regenerate across the site of the injury – but even getting the nerve fibres to span these couple of centimetres is a challenge.

“The problem is scar tissue,” says Fawcett. “It’s very difficult for nerve fibres to grow through this tissue.” He has identified an enzyme, chondroitinase, which can dissolve scar tissue. The enzyme works in rats and is in preclinical development for use in humans by the US biotech company Acorda Therapeutics.

Once the scar tissue has been dissolved, the nerve fibres need to regenerate and make new connections. Although restoring motor nerve fibres is proving a challenge, Fawcett has managed to restore sensory nerve fibres in rats, which is an important start. “Patients need to be able to feel what they’re doing and to sense pain. If they turn on a hot tap, they can easily scald themselves if they can’t feel the heat. And of course, they want sensation back in their genitalia.”

In most spinal cord injuries, some nerve fibres will always survive, and Fawcett believes we may be able to harness these to bypass nerve damage if we can harness a remarkable property of the young brain known as plasticity, which enables new connections to be made as we learn new skills. If a young child receives a spinal injury, their chances of recovery are much better than for an adult as their brain can adapt, but as we age, a cartilage-like coating wraps around nerve fibres, cementing the connections in place. These molecules make it difficult for the brain of an injured adult to find a way to bypass the injury.

“Interestingly,” explains Fawcett, “one of the main constituents of this cartilage is the same as that which blocks nerve growth in scar tissue – and we know we can dissolve this using chondroitinase. This should make rehabilitation – teaching the brain to do useful things again – dramatically more successful.”