People trafficking is a billion-dollar business with a history that spans centuries. A new study identifies the beginnings of the modern trafficker – the men and women who “sold souls” in 17th- and 18th-century Germany.

This was a chain migration, but it was also a chain recruitment, where the apprentice learnt from the master agent

Johannes Tschudi was 23 years old when he and his wife Anna left Germany in 1749 aboard the Crown in search of work and a new life on American soil. He was to take the perilous voyage across the Atlantic a further four times – a remarkable number considering how many migrants, including his wife Anna, died on these trips. But perhaps even more remarkable is the fact that between his first and last voyage, Johannes Tschudi transformed from a trafficked migrant to enter the business of selling souls – he became a human trafficker.

The notion of human trafficking is a familiar one today: individuals, either lured by the prospect of a better life or coerced, are recruited, transported, harboured and ultimately exploited by the trafficker. The United Nations Office on Drugs and Crime estimates that at any one time this billion-dollar business is responsible for 2.5 million victims, many of whom will end up in forced labour, slavery, prostitution or begging.

In the 17th and 18th centuries, trafficking was connected with a rather different purpose, as Cambridge historian, and Fellow of Trinity Hall, Dr William O’Reilly explained: “Trafficking speeded up the establishment of new settlements in America and eastern Europe, where a labour force was needed. This was a time when people were resigned to the inevitability of emigration. Borders were relatively close and various wars had left individuals questioning their long-term safety. In the 18th century alone, as many as one million emigrated from their homelands in western and central Europe to start new lives, mostly in North America and Hungary.”

In fact, the German people, O’Reilly finds, were one of the most migratory of all national groups at this time. Yet the role of the traffickers to populate these new societies has been largely overlooked.

His research, to be published as a book in 2014, provides fresh insight into the activities of these people movers, arguing that their actions kick-started the first systemisation of migration: “Until the process of moving people became a profitable business enterprise, and connections were made between the supply and demand for human cargo, large-scale migration could not occur.”

On Tschudi’s first journey in 1749, he was one of 476 migrants all connected to him by blood or village; they had been recruited by Johannes Marti. On his final journey in 1767, Tschudi had recruited all 62 passengers on board the Sally bound for Philadelphia. “It seems likely that Marti was, at least in part, responsible for the recruitment of Tschudi as a migrant to the Americas and may have facilitated his re-invention as a recruiting agent himself,” said O’Reilly. “This was a chain migration, but it was also a chain recruitment, where the apprentice learnt from the master agent.”

In studies of migration, movement of people is often considered in terms of ‘push and pull’, in which labour shortages in one area might pull migrants, and poor conditions at home might push them. “But this model does not adequately explain European migration before the 19th century; it would suggest that all migrants acted freely and independently,” said O’Reilly.

“This was not the case here. It was more often directed by traffickers towards a specific territory because of the financial reward they would accrue and it was done so through their command of a niche market in information. By selling labour bonds – a ceel in Dutch – these traffickers sold on more than a person’s labour; they sold their soul, or ziel. Contemporaries considered that these labour-bond sellers became 18th-century soul sellers, the beginning of the modern trafficker.”

O’Reilly’s painstaking study of ships’ logs, maps, newspapers, arrest warrants, customs documents, river networks and letters, across seven countries, has enabled him to paint a remarkable picture of the complex processes that were at work. “Traffickers provided a bridge to a new life in a new land for those wishing to cross. It was a market where labour was retailed most successfully if people like Tschudi acted as brokers, filling ships with ‘human freight’ for the transatlantic crossing.”

In effect, the traffickers were walking propaganda machines. “They had to convince would-be migrants of the benefits of migration, to the point of underhand deception. As one example, some were told ‘roasted pigeons would fly into their mouths without having to work for them’.” 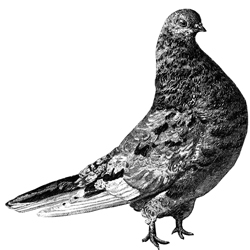 The traffickers also had to thwart negative stories about the harrowing journey fed back by previous migrants. One traveller wrote: “hunger, thirst, and scarcity of all help had cost the lives of the majority on the ship.” Another that many “came close to murdering one another” in the cramped conditions. There were even tales of having to cook and eat dead fellow passengers. O’Reilly estimates mortality at around 15% or even higher as shipping firms in Holland, England and America, seeking to maximise profits, continued to raise the average number of emigrants per vessel.

“Tschudi, and others like him, learned quickly that by counteracting these negative descriptions of the journey with stories of limitless land and bread, of freedom and prosperity, he could turn a handsome profit,” said O’Reilly.

Traffickers could access information about opportunities abroad that was not generally known to potential emigrants. “For me, one definition of trafficking is the sourcing and supply of information leading to migration. In this regard, this is a story across time. From what I’ve found looking at contemporary situations – human trafficking from Moldova, for example – nothing has changed terribly much. The information comes from migrants who return home typically in the employ of other agents, and who then gain money for every migrant they recruit in turn.”

“It opened up information channels for those who, through illiteracy or geographic isolation, would have remained ignorant of the possibilities open to them,” he explained. “But the information was endowed with inflated images and delivered by those adept at marketing it for their audience.”

Tschudi’s dishonesty was publicly revealed. Shortly after the Sally docked in Philadelphia, a letter appeared in the local newspaper on behalf of all the migrants who had taken the journey, denouncing him as a “paragon of wickedness, an arrant liar and an out-an-out deceiver” who had “enticed and seduced nearly fifty people” to travel to America, in part through blackmail, in part through the threat of physical violence. “Their resentment was focused on the arduous journey,” said O’Reilly, “but no doubt by this stage the migrants would also have encountered the realities of settling in a new country and finding suitable employment, and have come to realise that not all was paved with riches as he had described.”

“Tschudi refused to accept the accusations levelled against him but his accusers would not go away,” added O’Reilly, who estimates that migrants would have paid £5–10 for the privilege of emigrating. “Denouncing him, they said that he had tricked them with his tales of encouragement, while all the while ‘he took a sum of money from a merchant… with the promise of delivering to him a number of people’.” Men, and women traffickers too, grew rich on the profit of human trafficking.

O’Reilly’s research highlights the role of traffickers like Tschudi as key to the process of migration. “Facilitator, escort, at times swindler and cheat, the human trafficker bound an ever-shrinking world together with ties of information and opportunity, and in effect aided the development of global labour markets for Europeans.”

For further information about this story, please contact Louise Walsh at louise.walsh@admin.cam.ac.uk

German migrants boarding a steamer in Hamburg, Germany, to travel to America