Men in stripes: spot the difference in early modern woodcuts

Sixteenth-century woodcuts often depict young men wearing striped doublets or striped hose.  When historian of science Tillmann Taape embarked on a journey into the meaning of stripes, he discovered that artists used them to mark out people who were neither rich and educated nor poor and illiterate – but something in between.

The whole topic of stripes, and the messages they convey, set me off on a tangent that took me into the realms of art, fashion and social satire

Historians need to pursue parallel lines of enquiry to add an extra dimension to their research.  Tillmann Taape, a PhD candidate in History and Philosophy of Science, is much more interested in early printed books than in clothes. He never thought he’d be immersing himself in the fine details of 15th century men’s fashion as means of understanding the makings of early modern science.

Taape is studying medical manuals compiled by a surgeon-apothecary around the turn of the 16th century. Hieronymus Brunschwig’s works were published by Johann Grüninger who commissioned a highly skilled artist (name unknown) to produce dozens of detailed woodcuts to illustrate some of the earliest books printed in Germany. Brunschwig’s were the first books on surgery and medical distillation to be published in the German-speaking lands of the Holy Roman Empire.

The focus of Taape’s research is Brunschwig’s surgery manual, plague treatise and two books on distillation, all published in Brunschwig’s home town, Strasbourg. His scholarship will add to an understanding of medicine in the context of a world in which printing was just beginning to revolutionise the transmission of practical knowledge and thus to raise questions about who should have access to what kind of knowledge.

A big question for historians working on early medical books is: who did the author and publisher think would be likely to read and benefit from items that would have been costly to produce and correspondingly expensive to purchase? In the case of Bruschwig’s collections, the clues to unravelling this puzzle lie not just in the text – which he often addresses to the ‘common man’ – but also in the illustrations used to give the reader a quick idea of the topics covered in the book.

As Taape shifted his gaze from the books’ written content to the woodcuts, a succession of smaller but equally compelling questions crept into his mind: why are so many of the men depicted in the images wearing bold and vertical stripes, and what was the artist’s intention in dressing some men in stripes and others in plain garments? 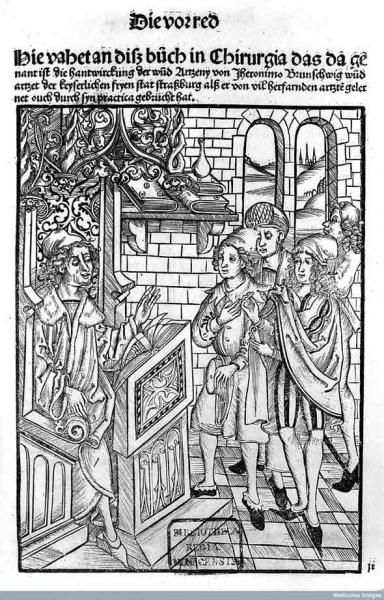 At a time when people’s outer appearance was thought to reflect their inner character in a much more direct way than today, artists could use clothing as a visual ‘label’ for the different kinds of people they wanted to depict. Anyone with the proverbial feather in their cap, for example, would have been recognised as well-to-do, masculine and energetic.

The striped garments in the woodcuts used in Grüninger’s books are a striking label, calculated to stand out. While the background and other sartorial details are captured in fine lines and delicate hatching, the stripes appear as unbroken, solid black or white shapes. The difference in clothes is underlined by an apparent division of labour in the images: striped people are often shown doing manual work, such as stitching up wounds, while figures in monochrome fur-trimmed robes stand well back.

Stripes clearly marked out a particular kind of person, so the next step was to find out what it meant to be stripy in the early modern period. “The whole topic of stripes, and the messages they convey, set me off on a tangent that took me into the realms of art, fashion and social satire. To embrace stripes as a complex narrative of symbols, you have to look at cultural and political history, the ways in which social structures were perceived and conveyed in forms of dress as well as figures of speech,” says Taape.

A book called The Devil’s Cloth discusses stripes in Biblical references and medieval fiction right through to stripes in prison uniform, pyjamas and toothpaste. Its author, Michel Pastoureau, argues that stripes stood out because they were inherently offensive to the medieval eye which was used to decoding images layer by layer. “Pastoureau suggests that stripes defied this hierarchical gaze because they resist being distinguished into background and foreground. Instead, their contrasting colours appear in the same visual plane,” says Taape.

“Stripy clothes, moreover, were often literally cobbled together from different pieces of material, which could make them somewhat second-rate not only with respect to visual sensibilities, but also because they could be seen to go against the Bible. Stripes were in stark contrast with Jesus’s garment, woven in one piece, and laughed in the face of the decrees against wearing garments made from different materials, found in Leviticus and Deuteronomy.”

But visual symbolism is rarely one-sided and, by the early modern period, stripes had acquired another set of connotations. Precisely because of their conspicuous or even unsavoury nature, striped clothes became a sign of courtly extravaganza, giving rise to a new fashion of elaborately tailored striped or slashed doublets and hose – perhaps rather in the way that more than four centuries later,  punk, with its rebellious rips and subversive safety pins, was reimagined by couture.

Historians think that the 16th century fashion for stripes first appeared at the North Italian courts, and was brought to the streets of prosperous Germany by the Emperor's new infantry, the so-called lansquenets, who combined short doublets, often striped, with tight-fitting striped or mi-parti hose. 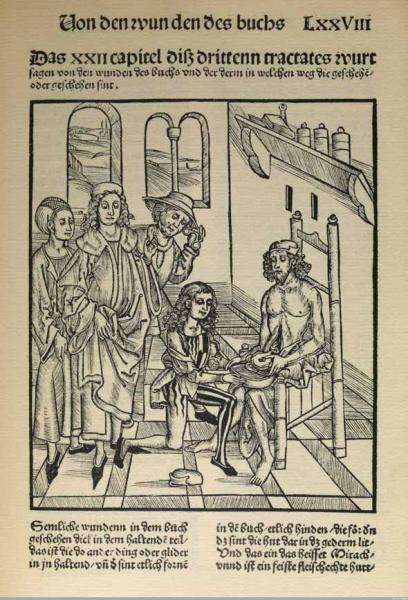 “Stripy clothes became particularly popular among the middling sort of citizens of free imperial towns, artisans and even wealthy farmers and landowners,” says Taape. “These people constituted a growing and increasingly self-aware middle layer of society, sandwiched between poorer day-labourers, who did not own any property, and the wealthy urban patriciate or landed gentry.”

Like checks and other bold geometric patterns, stripes are attention-seeking: “look at me!” In the setting of burgeoning European towns and cities, where artisans and merchants often formed part of the governing council, the new middle class of ‘stripy people’ represented a force to be reckoned with. As arrivistes they were, inevitably, satirised for their uppity, in-your-face presumption in treading on the toes of those higher up the social scale.

“The literature of the late 15th century, notably social satire in the tradition of Sebastian Brant’s Ship of Fools, associates this newly significant social group  with striped clothes. In a sermon inspired by Brant’s satirical work, the Strasbourg preacher Johann Geiler von Kaysersberg coined a new term for this kind of person –  ‘striped laymen’ or gestreyflet leygen in the original German,” says Taape.

“The phrase stuck, and so the 'striped layman' became a rhetorical statement as well as a visual one. His striped clothing identified him as being ‘half and half’, or in between, not just in terms of wealth and status but also in terms of education.”

Taape continues: “The striped layman is literate in his local language but not in Latin – and, as he becomes more powerful, he emerges as a central figure in the visual rhetoric of Protestant pamphlets during the Reformation. Martin Luther wrote for an audience of precisely this kind of person. Although not a Latinate scholar of theology, the striped layman sought salvation in his own reading of Scripture in the vernacular without learned clergy as an intermediate.”

Brunschwig was more concerned with the common man’s health than the salvation of his soul. Each of his books contains a number of different woodcuts – but one particular illustration appears in all of them. It shows a teacher addressing a group of students who stand in front of him. The teacher, who is seated at a lectern, wears a fur-lined scholar’s robe. He is lecturing from a book positioned so that only he can see its contents, thus demonstrating his exclusive access to the text.

“Among his students, we see a young man dressed in stripes. While his fellow student listens demurely, cap in hand, this striped chap gesticulates as if he’s arguing a point with the teacher. What’s more, he’s holding a roll of paper, which could be a sheet of notes or a medical recipe. The picture suggests that this striped layman is literate and familiar with some of medicine’s written forms,” says Taape.

It was a nifty sales ploy on the part of Brunschwig and his publisher to put the striped layman centre stage. The customer, perhaps not yet always right, was often striped. “In the chapter of my PhD thesis that explores the dress depicted in the woodcuts, I argue that the middling man – the striped man – neatly symbolises the intended reader of Brunschwig’s works, although Brunschwig himself never explicitly comments on the depicted figures and their stripes,” says Taape.

“Just a few years later, however, the physician Lorenz Fries from Colmar, not far from Strasbourg, dedicated his Mirror of Medicine specifically to gestreiffelten leyen, ‘striped laypeople,’ who want to learn about medicine. Styling himself as something of a Luther of medicine, Fries makes explicit a trend which we already see developing in Brunschwig: the middling, half-educated layman as a reader of medical books which can help him to treat himself and his household.”

As a digression from his meticulous analysis of Brunschwig’s texts, Taape’s foray into the world of stripes was undoubtedly a lot of fun. But it also showed him that the visual culture of early modern print can still tell us new things if we can figure out how to decode images and read them alongside contemporary texts.

This article is based on a blog that appeared on the Recipes Project website http://recipes.hypotheses.org/5551 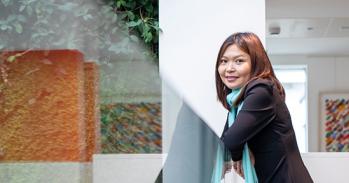