Lord Byron and the bears beneath Cambridge

I have got a new friend, the finest in the world, a tame bear. When I brought him here, they asked me what to do with him, and my reply was, ‘he should sit for a fellowship’

When the eminent architect T G Jackson designed the Sedgwick Museum of Earth Sciences, he added a delightful flourish to the double stairway leading up to the entrance. A pair of brown bears guards one set of steps and a pair of bison the other.

The choice was apposite. In 1904 geologists found fossilised remains of both bears and bison in the gravels of Barrington, a village south east of Cambridge. Bears and bison were just some of the animals roaming northern Europe 120,000 years ago during an inter-glacial period.

The Sedgwick Museum takes its name from Adam Sedgwick, one of the founders of modern geology. It’s one of the world’s oldest geological museums and its collection comprises many millions of objects including spectacular ichthyosaurs found by the fossil collector Mary Anning. The fossils found in the Barrington Beds by a group of Cambridge geologists are on display in Bay 3. Among the exhibits are remains of hippo, red deer, hyena, bison and elephant – as well as bear and bison.

Look carefully at the stone used to sculpt the animals at the museum entrance and you will see that it’s full of tiny fragments of shells. The stone that Jackson chose for the dressings of the building is shelly oolitic limestone of Middle Jurassic age. This stone dates from around 170 million years ago, when marine animals flourished in the warm seas that covered much of the northern hemisphere.

The bears at the Sedgwick Museum mark the start of a ‘building stones of Cambridge’ walk devised by Dr Nigel Woodcock, Reader in Earth Sciences. He said: “The stone used for the dressings of the Sedgwick Museum come from the Clipsham quarry north west of Stamford. The earliest recorded use of Clipsham was for Windsor Castle in the 14th century. Its durability made it a favourite with Victorian architects. In Cambridge, Clipsham was also used for the dressings at Pembroke College, Great St Mary's and King's College Chapel.”

The Sedgwick Museum is not the only Cambridge building to feature bears: one of several late 16th or early 17th century murals high up inside a tower at Madingley Hall (home to University of Cambridge Institute of Continuing Education) portrays a bear hunt. Until the practise was stopped in the mid-19th century, bears were bred for sport. 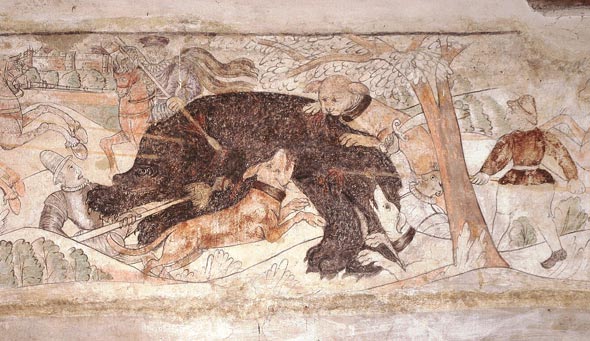 One of the figures depicted in the Madingley Hall murals might be a past owner of the hall. Sir Edward Hynde, who was especially fond of hunting, had bread especially baked for the bears he kept in his extensive park.

The eccentric poet Lord Byron is reported to have kept a bear while he was a student at Trinity College in the early 1800s. He’s said to have purchased the bear, quite possibly at Stourbridge Fair, in defiance of the rules that banned students from keeping dogs in college.

On 26 October 1807 Byron wrote to his friend Elizabeth Pigot: “I have got a new friend, the finest in the world, a tame bear. When I brought him here, they asked me what to do with him, and my reply was, ‘he should sit for a fellowship’.”

Next in the Cambridge Animal Alphabet: C is for an animal that is the source of almost half the meat eaten in the UK, and the bacteria responsible for four out of five cases of food poisoning.

Inset images: Scene showing how some of the plants and mammals found as fossils at Barrington may have looked in life (artwork by Robert Nicholls © 2009 Sedgwick Museum of Earth Sciences, University of Cambridge); 17th century mural at Madingley Hall (University of Cambridge Institute of Continuing Education).