Iggy the Iguanodon and the 160-year-old dinosaur song

The Cambridge Animal Alphabet series celebrates Cambridge's connections with animals through literature, art, science and society. Here, I is for Iguanodon – a thousand ages underground, his skeleton had lain, but now his body’s big and round, and there’s life in him again!

Visitors described the Crystal Palace's array of artwork, installations, fountains and glasshouse as like a trip to fairyland, and the concrete monsters were the star of the show

On New Year’s Eve 1853, a group of entrepreneurs dined inside the mould for a giant model Iguanodon and, it is reported, sang a rousing song in praise of dinosaurs. The chorus runs: The jolly old beast/Is not deceased/There’s life in him again! ROAR. The model that provided an unlikely dinner venue that December evening was part of a set of concrete dinosaurs – the world’s first full-size dino-sculptures – made for the Crystal Palace at Sydenham.

Some 160 years on, Cambridge University has revived this song in celebration of the Iguanodon (nicknamed Iggy) on display at the Sedgwick Museum of Earth Sciences. Barney Brown, the University’s head of digital communications, set the dinosaur lyrics to a bluegrass tune which he sings in a gravelly voice. It’s not known when the song was last heard by the public or what the original musical score was. The lyrics appear in WJT Mitchell's The Last Dinosaur Book (1998)  and the song is discussed in Science in Wonderland (2015) by Melanie Keene (Homerton College, Cambridge).

A plaster replica of a skeleton found in a mine in 1878, Iggy was given to the Sedgwick Museum by the King of Belgium. The original creature would have measured 11 metres from nose to tail and weighed more than an elephant. Fossilised bones of Iguanodon or its close relatives, which lived between 140 and 120 million years ago in the Cretaceous Period, have also been found in several places in Britain, notably the Isle of Wight, West Sussex, East Sussex, Surrey, Kent, Dorset, Yorkshire and Potton in Bedfordshire.

Iggy is posed in the ‘kangaroo-style’ posture that was an early interpretation of the creature's stance. Palaeobiologist Dr David Norman, who was director of the Sedgwick Museum from 1991 to 2011, has shown in the course of his work on dinosaurs that this upright posture would not have been possible for an animal like this; it would have spent much of its time browsing and walking on all four legs. 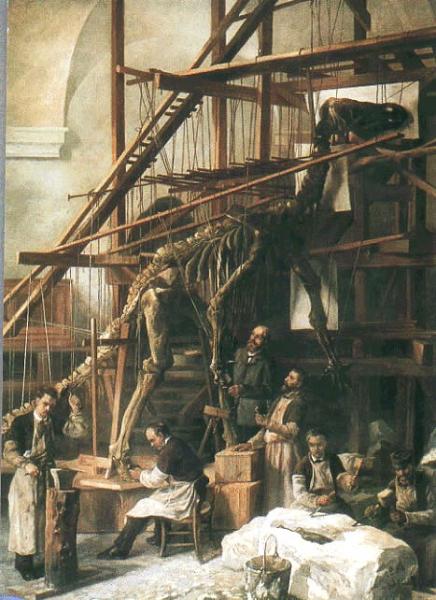 Research by Norman has shown that three of the fingers of Iguanodon’s ‘hands’ were modified to form a load-bearing foot with toes that ended in broad, flattened hooves. The ‘thumb’ was a ferocious dagger-like spike, while its ‘little finger’ was elongate and prehensile, and could have been used to help grasp clumps of vegetation.

“The animal's back and tail were stiffened by bundles of bony rods – ossified tendons – that you can see if you look along the spine of the animal. These bony tendons would have stiffened the back while it was held more or less horizontally and the tail, which stuck out at the rear, would have acted as a heavy cantilever (or counterbalance) to the front part of the body,” says Norman.

“The bony tendons running along the sides of the spine would also have prevented the dinosaur from bending the base of its tail, as seen in the skeleton in the Sedgwick Museum, and adopting such a steeply upright posture."

Underneath the skeleton is a fossilised footprint, thought to have been made by an Iguanodon walking on a soft surface. The footprint was found on the seashore, having eroded out of the cliffs near Atherfield Point on the Isle of Wight. Collections manager Dan Pemberton says: “The footprint in the museum is approximately 17 inches, or 43cm, long from the back of the print to the tip of the middle toe. Even bigger footprints can be found in the Cretaceous rocks exposed on the foreshore of the Isle of Wight.”

Iguanodon was one of the first dinosaurs to be discovered and scientifically described by the Sussex-based doctor Gideon Mantell (1790-1852). Mantell at first envisaged Iguanodon as a gigantic lizard-like reptile but later on he thought that it might have resembled something like a giant ground sloth. One of his contemporaries (Richard Owen) – who invented the word dinosaur to recognise the existence of a group of stupendously large, extinct reptiles – deduced that it must have been a sort of gigantic reptilian rhinoceros, complete with a horn (a misplaced thumb spike) on the tip of its nose. 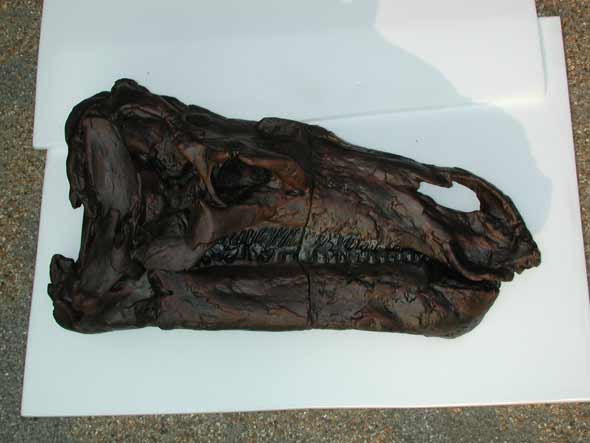 “The discoveries at Bernissart in Belgium helped greatly to clarify our understanding of this animal, since the skeletons were mostly complete and articulated – their bones were preserved in more or less the same arrangement as they had been in life,” says Norman. “Even so, the animal's typical life posture was misinterpreted because the scientist, Louis Dollo, who described them in the 1880s, was convinced that their habits were like those of giraffes, which feed high in the treetops, rather than like rhinoceroses that browse low to the ground.”

Norman has revealed many new and unexpected aspects of the way of life and general biology of Iguanodon. He has also shown that there was a variety of Iguanodon-like dinosaurs that lived in southern England during the Cretaceous Period including Iguanodon itself, Mantellisaurus, Barilium and Hypselospinus. They were all quite large plant-eaters, and all of them had that very distinctive spiky thumb.

In her book, Science in Wonderland, Dr Melanie Keene (Homerton College) explores the hugely enthusiastic public response to the creation of one of the world’s first sets of full-sized dinosaur models – including an Iguanodon based on Owen’s version of how it might have looked.

She says: “The models were made by sculptor Benjamin Waterhouse Hawkins for the landscaped gardens around the Crystal Palace in 1854. An expanded, commercial version of the Great Exhibition that had been held in Hyde Park three years earlier, the Sydenham enterprise was one vast project of visual education. Visitors described its array of artwork, installations, fountains and glasshouse as like a trip to fairyland, and the concrete monsters were the star of the show.” 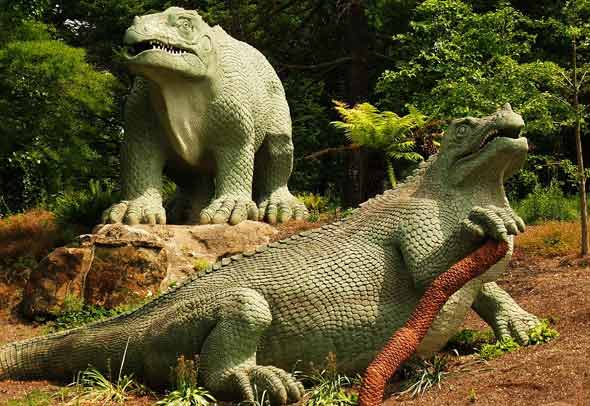 Even before the exhibition had opened, the sculpted beasts made it into the newspapers, with coverage of a celebratory meal held in the mould of the Iguanodon model on New Year’s Eve 1853. That evening, investors, men of science, and Hawkins, had dined in style, and had even joined together in song to hymn their achievement: ‘A thousand ages underground,/His skeleton had lain,/But now his body’s big and round/And there’s life in him again!... The jolly old beast/Is not deceased/There’s life in him again!/ROAR’.

The Iguanodon model has come to be an iconic part of the South East London landscape, and reproduced in many different media. For example, versions of the Crystal Palace monsters have appeared in many children’s books over the past 150 years, from E Nesbit’s Enchanted Castle to Topsy and Tim Meet the Monsters. “Some authors, like the singing diners, favoured a resurrectionary theme, modifying the display’s original didactic intentions and instead converting models such as the Iguanodon into terrifying creatures that came to life at night and menaced the young,” says Keene.

More recent children’s books have, in line with the increasingly outdated appearance of the creatures, featured the monsters as rather funny-looking friends to children. In 1970 Ann Coates combined both of these elements in her Dinosaurs Don’t Die (1970), which brought the Iguanodon model back to life as a character, ‘Rock’, who befriended her protagonist, Daniel. In the book, boy and creature cross London together to see a more modern interpretation of the Iguanodon on show at the Natural History Museum, the contrast between the old and new forms brilliantly captured in John Vernon Lord’s evocative illustrations. 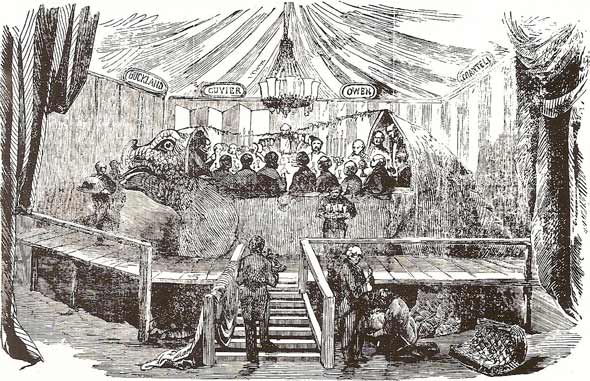 Keene adds: “Surviving the catastrophic fire that destroyed the main building in 1936, these amazing artefacts can still be seen today in Crystal Palace Park, and have most recently been cast as objects in need of conservation. Here in Cambridge, a miniature version of Owen’s rhinoceros-like Iguanodon can be seen beside the full-sized skeleton in the Sedgwick Museum.”

Next in the Cambridge Animal Alphabet: J is for a creature so clever it has been nicknamed the "feathered ape" by researchers. 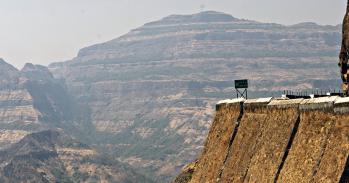