Going to the dogs: the 500-year old greyhounds of King’s and in the fight against cancer

The Cambridge Animal Alphabet series celebrates Cambridge's connections with animals through literature, art, science and society. Here, G is for Greyhound – as heraldic symbols of the Tudors' right to rule, and as part of important research into treatments for osteosarcoma in dogs and humans.

The fabulous architecture of King’s College Chapel is not just about piety. Its gravity-defying fan vaulting, decorative sculpture and stunning windows are an assertion of legitimacy by a royal family under pressure. The Tudors faced many threats – from other claimants to the throne (both dynastic rivals and pretenders) as well as from disease and infertility.

The chapel was constructed over a period of 70 years (1446-1515) under the instructions of four English kings: Henry VI, Richard III, Henry VII and Henry VIII. All four were obsessed by questions of succession; the provision of a healthy male heir was vital to carrying the family line forward.

Henry VII (the first Tudor king) was responsible for the phase of building which saw the creation of the interior that today draws thousands of visitors. Henry VII’s master mason John Wastell and chief carver Thomas Stockton were tasked with creating a chapel ablaze with the emblems of royal dynasties that were sometimes warring, sometimes united.

In Carving in King’s Chapel, a booklet published in 1970, the historian John Saltmarsh wrote that the antechapel at King’s represented “the most lavish display of worldly pomp to be found anywhere in English Gothic”. One of the most eye-catching features of the stone ornamentation of the antechapel is its imposing Tudor armorials – great stone badges. 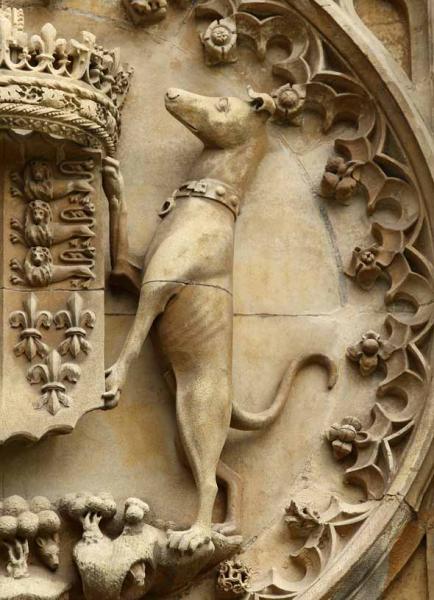 Saltmarsh described how “over and over again the arms of Henry VII are repeated with his dragon and his greyhound, the crowned Tudor rose, the crowned portcullis which was the badge of his mother’s house of Beaufort, and the crowned fleur de lis for his titular kingship of France”.

Each shield (or escutcheon) is flanked by heraldic ‘supporters’: a dragon on the left and a greyhound on the right. Carved from pale limestone, the slender greyhounds have collars set with jewels, marking them out as favoured members of a wealthy household.  All the shields have holes in their left-hand corners. This is a reference to jousting: a knight would pass his lance through the hole in the shield in order to defend himself while tilting at his opponent.

“The Renaissance sculptor skilfully reveals the physical characteristics of the greyhounds which stand on their long thin legs and with their front legs both against, and in front of, the vertical architectural framework structuring the walls, thus placing the animal both inside, and in front of, the three- dimensional space of the heraldic devices,” says Professor Jean Michel Massing, Fellow in History of Art at King’s and co-author of a recent book about King’s Chapel.

“The elongated bodies of the slim-built animals are elegant, with their broad chests, while their alertness is emphasised by their heads which are turned to catch the gaze of the viewers, with ears pricked and elongated muzzles.“

The greyhound is the symbol of the Beaufort family; the dragon is the emblem of the Tudors. Henry VII’s mother was Margaret Beaufort, Countess of Richmond, and his father Edmund Tudor. Margaret was just 13 years old when she gave birth to Henry. Edmund died before his son was born. Margaret, who went on to marry a further three times, founded two Cambridge colleges: St John’s and Christ’s. 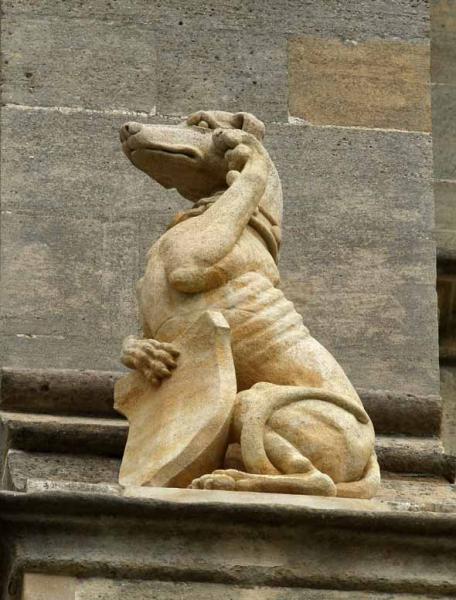 As a symbol of celebrity and loyalty, the greyhound is etched into the visual identity of not just one but several powerful families, making its presence in King’s Chapel even more potent. The animal was the emblem of the Richmond family as well as the Beaufort family. Edmund Tudor, First Earl of Richmond and father of Henry VII, was granted a white greyhound as a heraldic supporter by his half-brother Henry VI.

“The greyhound is both a Lancastrian emblem and a Tudor one – and thus very handy as a heraldic expression of the dynastic right of the Tudors to the English throne,” says Peter Jones, the librarian at King’s College. “In this way the dynastic badges in the Chapel are all about legitimacy, a right to rule inherited from the Chapel’s founder, Henry VI, by the Tudors.”

The lean forms of dragon and greyhound can also be spotted in carving on the wooden rood screen that divides the antechapel from the choir stalls and altar. The carvings are in the Renaissance manner and made by foreign craftsman. “The carvings feature the linked initials of Henry VIII and Anne Boleyn, who was executed that year,” says Professor Paul Binski, Professor of Medieval Art and author of Gothic Wonder. “The screen and stalls at King’s display some of the earliest Renaissance detailing in England and show how influential courts were in changing taste.”

Built for hunting, coursing and lolling beside open fires, greyhounds feature in art as far back as 5,000 years. 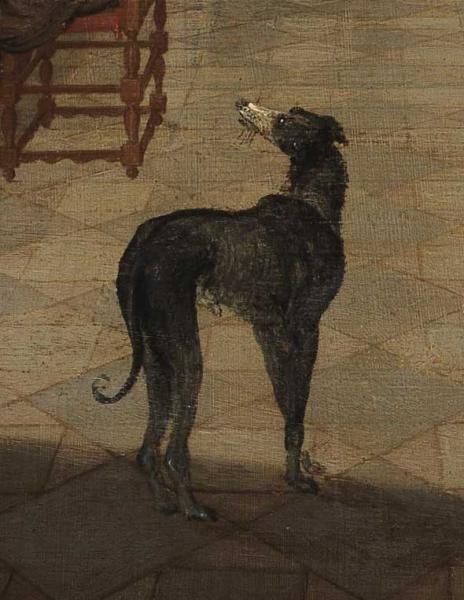 Considered one of the world’s oldest breeds, greyhounds are the world’s second fastest mammals (cheetahs are marginally faster) and their large ribcages contain big hearts and lungs. The animals achieve their famously high speeds by arching and then contracting their spines like an arching spring.

When it became apparent to vets that greyhounds suffer markedly more than other breeds from bone cancer (osteosarcoma), it was suggested that the disease may result from the stress they experience when they are raced competitively. But preliminary investigation soon showed that greyhounds which never race, and are simply kept as pets, also have a high incidence of the disease with the likelihood of bone cancer increasing as the dogs grow older.

Professor Matthew Allen and his colleagues at the Department of Veterinary Medicine are developing new ways to diagnose and treat bone cancer in dogs. “Greyhounds and other larger breeds, including the Rottweiler, are significantly more likely to develop bone cancer than small dogs,” says Allen. “Environmental factors may make a contribution but it’s clear from the data that genetics play a key role in the development of osteosarcoma.  Our research has recently identified five genes that are associated with spread (metastasis) of osteosarcoma in dogs, opening up possibilities for better diagnosis and treatment.”

The dog is an excellent translational model which will help scientists to diagnose and treat humans with bone cancer. Osteosarcoma eats away healthy bone tissue, leaving weaker, damaged bone which can break easily, even with normal activity. In dogs, the disease typically first develops between the ages of five and seven, a stage of life that is ‘middle age’ for dogs. The treatment most commonly offered by vets is amputation followed by chemotherapy and perhaps radiation therapy. 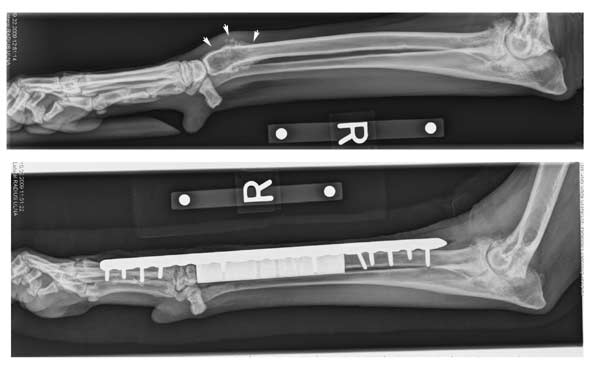 “Amputation seems drastic but dogs manage well with three legs – even greyhounds. But removing the affected leg doesn’t cure the animal. In combination with chemotherapy, it can provide good quality of life for an average of 14 months,” says Allen. “Our work into gene expression in canine osteosarcoma will enable us to better predict which dogs are most at risk of developing metastasis, and should allow us to design better therapies for these patients. Perhaps most importantly, given the close similarities between canine and human osteosarcoma, the work should have direct and tangible benefits to the diagnosis and treatment of humans with this disease.”

Humans are some ten times less likely to develop bone cancer than dogs. But osteosarcoma is notoriously hard to treat in people. It often develops during the late teen years and progresses fast, spreading to other parts of the body with devastating results. “In humans, physicians do everything they can do to save the limb that is affected using therapeutic treatments and implants to replace the damaged bone,” says Allen. “But, especially if the cancer has spread beyond the bone, the long term prognosis can be poor, with five-year survival rates hovering around 50%.”

In addition to collaborating with physicians who treat human osteosarcoma, Allen and colleagues will be working with a network of veterinary practices to reach owners of greyhounds and other large breeds throughout the country. The goal of this programme will be to collect samples of tumours from dogs with primary and metastatic osteosarcoma and to determine whether the genes identified in the research to date can be used to discriminate between tumours with different levels of aggressive behaviour.

“In our experience, the general public is keen to help,” says Allen. “Owners have an opportunity to transform a terrible situation – a diagnosis of osteosarcoma in their dog – into hope for the future by contributing to research that will help to understand and treat the disease in dogs and, ultimately, in humans.”

Next in the Cambridge Animal Alphabet: H is for an animal whose model teeth can be found in the Whipple Museum, which dominate the frieze adorning the Parthenon, and which played a central role in the rise of many great civilisations.

Inset images: Greyhounds on King's College Chapel (Mike Dixon © 2011 King's College, Cambridge); 'Interior of a hall - detail', by Nicolaes de Gyselaer (Fitzwilliam Museum); Osteosarcoma in the dog, showing the significant bone destruction that is typical of this tumour (top). In this dog, the tumour was successfully removed and the bone replaced with a metal implant (lower panel), in a procedure known as limb-sparing surgery (Matthew Allen).