Fancy pants: skirmishes with the fashion police in 16th-century Italy

With the autumn 2014 fashion shows in full swing, all eyes are on the top designers. In 16th-century Italy, the latest looks didn't always go down well with the authorities. Historian Giulia Galastro is researching the sumptuary laws regulating the level of opulence that could be paraded in public – and how the dandies of the day neatly side-stepped the rules.

The purpose of the laws is a matter of debate. Their wording suggests that luxury goods could damage the morals of those who consumed them. Fashion was seen as immoral: its transitory nature stoked an acquisitive lust for new goods.

On 15 September 1595, a Genoese man-about-town called Salvagio de Aste was spotted breaking the law. The record in Genoa's state archives describes with remarkable precision what Salvagio was wearing that autumn day as he strolled through the square of San Siro. He must have cut a dashing figure. He sported “an embroidered cap, a silk doublet of many colours with gold buttons on the sleeves, two rings with white stones on his fingers, a jerkin and embroidered hose in black silk”.

The detail with which Salvagio’s attire was noted is no accident: his showy and costly clothing was his crime. His colourful and lavishly embellished costume had fallen foul of Genoa’s Magistrato delle Pompe, whose role it was to enforce the sumptuary laws that regulated what men and women could wear. Patrolling the streets and squares of the bustling city as arbiters of the level of ostentation that was deemed appropriate, the sumptuary magistrates were quite simply the Fashion Police. 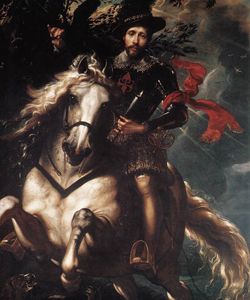 The role of these magistrates, and their (largely unsuccessful) attempts to moderate excessive spending, is one strand of research into clothing in early modern Genoa by Giulia Galastro, a PhD candidate in the History Faculty at Cambridge University. In particular, she is interested in the ways in which the materiality of fabric is interwoven with the fabric of society in Genoa – a centre of the Italian silk trade and a city famous for its production of sumptuous velvets and other luxurious textiles. 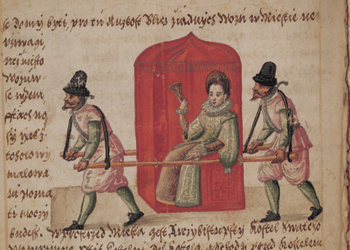 Sumptuary laws restricted the use of precisely these textiles, along with expensive decoration such as embroidery with gold and silver thread. It also covered jewellery and ostentatious modes of transport, such as the lady in a litter seen in this image taken from a travelogue (owned by Strahov Monastery) of a Bohemian nobleman, who visited Genoa at the beginning of the 17th century.

Italy wasn’t alone in having sumptuary laws – the obsession with legislating against costly clothes spread across Europe during the Middle Ages. In England, James VI and I abolished sumptuary laws in 1604 but continued to control dress by other means. “The purpose of the laws is a matter of some debate. Their wording suggests concern that luxury goods could damage the morals of those who consumed them. Fashion itself was seen as immoral: its transitory nature stoked an acquisitive lust for new goods,” said Galastro.

Financial considerations were also at play. A 15th-century Genoese law bemoaned "a great quantity of money which is kept dead and wrapped up in clothing and jewels, [and] if converted into trade might bring great return and profits". Some scholars, such as the historian Jane Bridgeman, have argued that the laws were an indirect tax on wealth, working on the tacit assumption that the rich would be prepared to pay to get around them.

“Part of the problem is that not much evidence for how the laws were enforced has been preserved, so it’s difficult to know how – and whether – they worked in practice. That’s what makes the Genoese sumptuary records so special. The rare survival of notes kept by the sumptuary magistrates gives us a glimpse of the laws in action, and of clothes in use. We can begin to build up a picture of who was wearing what, when and where,” said Galastro.

The records suggest that residents of Genoa routinely ignored the sumptuary laws. In the four years from 1594 to 1598, the magistrates recorded more than 560 contraventions of the regulations. The foppish Salvagio was among the repeat offenders. Three days after being admonished on 15 September 1595 he was back in San Siro, wearing exactly the same outfit. On 5 November he was there again, wearing a leather jerkin impregnated with musk.

The sumptuary magistrates were caught up in a game of catch-me-if-you-can as Genoa’s dandies defied and subverted the rules. The feckless Salvagio broke the law at least a further four times, suggesting that whatever fine was imposed was no deterrent to a man determined to strut his stuff. 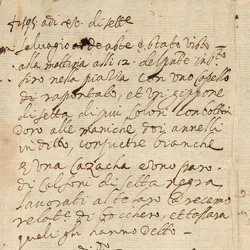 “It is likely that any fines imposed were modest in comparison with the cost of the offending garments. A whole outfit in silk velvet, embroidered with precious metal threads, could come close to the price of a sports car today: if you could afford to buy the clothes, you could afford to pay the fine – or the bribe,’ said Galastro.

In analysing the records of the Genoese sumptuary laws, Galastro made a startling discovery. She said: “Contrary to widely held beliefs, male offenders outnumber females. In terms of overall sumptuary offences, there are 289 men to 242 women. If we focus on offences concerning dress, however, the disparity is more striking: 269 men to 99 women. In other words, there were almost three times as many men breaking the law on clothing as women.” 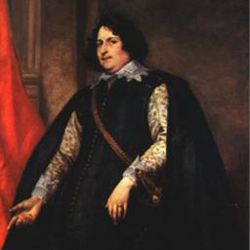 Historians have often presumed that, where sumptuary laws mention men at all, it is for dressing too femininely, but Galastro’s research suggests something different.

“It’s interesting that the majority of the offences relate to an outfit of black silk - taffeta, satin or velvet - ornamented with some sort of precious metal stitching or with lace. Just such an outfit appears in a portrait of an anonymous Genoese nobleman by the artist van Dyck which, to modern eyes, looks relatively sober. But black was a clear status symbol in Renaissance culture. Black dye was one of the most difficult to fix effectively, so we should be careful how we interpret these apparently ‘plain’ portraits,” said Galastro.

Anthony van Dyck worked in Genoa for six years from 1621 and painted a series of exquisite portraits of the local aristocracy. These show the city’s elite wearing luxurious garments. He moved to London in 1632 where his portraits such as ‘Lord John Stuart and his brother Lord Bernard Stuart’, circa 1638, show men wearing much more colourful and flamboyant clothing. 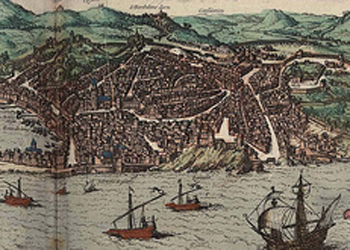 Clothes are made to be worn and the wearing of them is a form of performance – seldom more so than on the streets of a fashionable Mediterranean city humming with life. “If you pair the sumptuary records with literary sources, it seems that what was disquieting to the sumptuary magistrates in Genoa was a particular form of vaunting, flaunting masculine dress,” said Galastro.

In his 1620 commentary on the Characters of Theophrastus, the Genoese writer Ansaldo Ceba describes the effrontery of the young man who will “when he is wearing breeches alla Spagnola, or an embroidered doublet, circulate around the city so sedulously that you can’t help bumping into him in church, in the square, or on the corner… You needn’t think of leaving until you have admired him from head to toe. Indeed he will compel you to do so, now by opening his cloak, now by planting himself in front of you like a bulwark”.

Infringements of the sumptuary laws weren’t confined to the elite: artisans too were under scrutiny. Some were caught by the sumptuary magistrates while making luxury clothes. On 20 May 1595, the wife of Gioannetino the cheese-maker was spotted sitting on her doorstep sewing a man’s silk shirt, dyed in costly crimson, with gold and silver braids three fingers’ thick. Later in the summer three tailors were also caught working on luxury items.

These artisans were caught in a dilemma: their livelihoods depended on making luxury goods. “It is estimated that some 60% of the Genoese population was involved in the production of textiles and clothing – from the women employed to unwind silk filament from cocoons through the dyers and weavers in their workshops to the hundreds of tailors and seamstresses,” said Galastro. 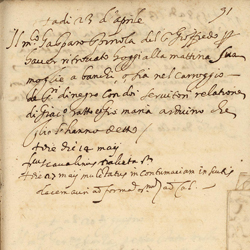 It was an era when people had a hands-on relationship with textiles, choosing and purchasing fabrics in consultation with their tailors with the arrival of new textiles and trimmings eagerly awaited. The vocabulary of fabrics and fashion was fabulously diverse – colours such as ‘incarnadine’ (the red of raw flesh) – most of these words lost to us today.

“What you wore, and how you wore it, was a matter of deep significance,” said Galastro.