Working in a lab as a basic scientist can often seem far removed from the real world. A year since the World Health Organization declared the Ebola outbreak over, one researcher tells how the skills he learned working in a lab in Cambridge turned out to be surprisingly useful in fighting one of the most terrifying disease outbreaks of recent times.

The satisfaction you get from being involved in a response like this ... is orders of magnitude better than publishing academic papers

On the windowsill of Professor Ian Goodfellow’s office sit photographs of him with his children, and just down the corridor, his wife is carrying out research in the same department. Even at work, he is surrounded by constant reminders of the special things in his life, providing a sense of security.

His work, too – apart from the treadmill of seeking funding – is a secure, safe environment. Goodfellow is a basic scientist, carrying out lab-based studies into viruses such as norovirus, the winter vomiting virus. He doesn’t even come into contact with norovirus patients, so is at no particular risk of contracting this unpleasant, but relatively harmless, infection.

Yet in December 2014, Goodfellow chose to leave all of this security behind – for several months at a time – to join a taskforce fighting one of the most hazardous and frightening emerging infections of recent times, the Ebola outbreak in Sierra Leone. Since the epidemic began in West Africa in 2013 until it was declared over in March 2016, the virus infected more than 28,000 and killed over 11,000 people.

Goodfellow was one of over 30 people from Cambridge, coordinated by Dr Tim Brooks at Public Health England, who lent their support. Goodfellow helped set up one of the first diagnostic laboratories in an Ebola Treatment Centre near Makeni, in northern Sierra Leone, with support from the UK government. This was physically demanding and at times potentially dangerous work. “We had to move several tons of equipment and reagents by hand, in 35°C heat with over 90% humidity on a rather dangerous and very active building site,” he recalls. During their stay they encountered fires, electric shocks, and one of his own postdocs was bitten by both a spider and a snake. 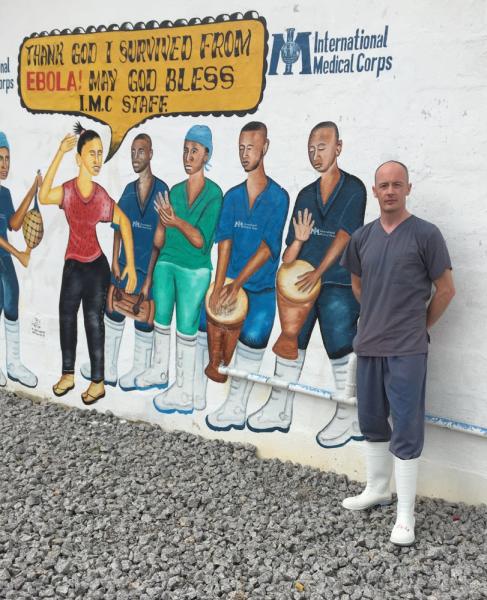 Since the start of the epidemic, Goodfellow and colleagues have sequenced over 600 Ebola genomes, helping provide information about how the virus is evolving in, and how its evolution has been affected by, unprecedented levels of human– human transmission.

Towards the tail end of the epidemic, sequencing allowed researchers to trace the origin of new cases. “To end the epidemic, you need to make sure that any new cases are in transmission chains that are being monitored and are geographically contained, so you can pinpoint where this virus is coming from.”

The Tonkolili District, for example, had been Ebola-free for several months when a new case occurred. “We needed to know if this new case had come from a new introduction from an animal host, from a neighbouring country, or if it was part of a chain of transmission that had been hidden from the healthcare providers.

There’s a lot of stigma around Ebola, so it was possible there was a whole cluster in a village and that no-one was reporting the cases. That would be a disaster: all of a sudden, you don’t go from one to two cases, you go from one to tens or even hundreds.”

By sequencing the virus, in a very short time they were able to trace the source back to a survivor in whom the virus had persisted, and to take appropriate measures to prevent further spread. In fact, their work showed that Ebola can persist in survivors for over 15 months after infection and be transmitted through unprotected sex, and possibly even from a mother to her child through breastmilk.

Now that the emergency has passed, the treatment centre has closed down, but its equipment is being used at the University of Makeni Infectious Disease Research Laboratory in a building donated by the country’s president, Ernest Bai Koroma. The laboratory was kitted out with support from the Wellcome Trust and the Cambridge- Africa Programme, and now functions as a base for local and visiting scientists to carry out research. Goodfellow and his postdoc Dr Luke Meredith have helped train local technicians and researchers in some of the latest techniques in surveillance and sequencing of pathogens such as HIV and hepatitis B.

“We need to avoid ‘parachute science’, where scientists fly in, take samples and leave,” he insists. “It should be about developing sustainable partnerships, about developing local capacity. With training and support, local researchers have the ability to respond to these outbreaks; they just need the equipment and the infrastructure.”

This has already shown its value. A new case arose in January 2016 while neither Goodfellow nor any of his colleagues were in the country, but local scientists were able to use the techniques to trace the source of the infection.

Going to Sierra Leone was not an easy decision for Goodfellow, but he feels that he had a duty to respond. “The academic virology community had a responsibility to offer support. We couldn’t just sit back and watch this massive epidemic explode in front of our eyes with the knowledge that we have skills that could be useful.”

Many of the scientists who went out have struggled to return to their normal work, he says – some even quit their jobs on returning to take up more front-line jobs or to undertake more translational research. For Goodfellow, it has certainly made him appreciate the contribution that basic science makes.

“Basic science can often feel removed from real world applications,” he says, “but the skills you gain from running a laboratory are actually very useful in these kinds of environments. The ability to think on your feet and to figure out solutions is invaluable.”

It has also given him some perspective about what he does. “The satisfaction you get from being involved in a response like this and in capacity building is orders of magnitude better than publishing academic papers.”

Cambridge graduate Charlotte Dixon (Churchill), BA (2014) Modern and Medieval Languages, was also part of the Ebola crisis response in Sierra Leone in 2015 while working with the Department for International Development on their Graduate Scheme.

Dr Caroline Trotter works on an infectious disease that has killed even more than Ebola. It occurs periodically right across the ‘midriff’ of Africa from Senegal to Ethiopia, in the so-called ‘Meningitis Belt’.

In the last major meningitis outbreak, in 1996, some 250,000 were infected and 25,000 people died. It was at this point that the global health community came together to fight back.

The Meningitis Vaccine Project (MVP) was launched, a partnership between international health organisation PATH and the World Health Organization (WHO). Working with the Serum Institute of India, MVP developed and rolled out the meningococcal A conjugate vaccine in just 10 years to combat the particular strain that affected the African belt. Since its introduction in 2010, 265 million people have been vaccinated. In Burkina Faso, where the vaccine was first used, a mass vaccination campaign saw 10 million people vaccinated in 10 days.

But even campaigns as huge as this aren’t enough to eliminate the infection, as Dr Caroline Trotter from the Department of Veterinary Medicine, explains: “You get a honeymoon period, but then you see a resurgence of cases.”

Trotter and her team used mathematical modelling to predict the best strategies for ensuring that this did not happen. The WHO, who funded her work, used it to shape their guidelines and ensure that the vaccine was introduced into routine vaccination programmes across sub- Saharan Africa.

She and Goodfellow were part of a Cambridge-Africa delegation to The Gambia in 2014 – a trip that inspired Goodfellow to lend support to combatting Ebola – and as a result Trotter is now working with collaborators at the Medical Research Council Unit in the country to look at the effect of the vaccine on pregnant women and their babies.

Meanwhile, she continues working with the African Meningococcal Carriage Consortium, a global research effort to study how meningococcal meningitis is spread in Africa, with the hope of gradually tightening the belt on this devastating disease.