Breath of life: how your risk of heart disease may stem back to your time in the womb

Smoking, lack of exercise, bad diet and our genes are all well-known risk factors for heart disease, cancer and diabetes. But, as researchers are beginning to understand, the environment in the womb as we first begin to grow may also determine our future.

Underneath, a silent killer is brewing... there is a theory that a complicated pregnancy may increase the risk of heart disease in the offspring later in life.

The history of science is littered with self-experimenters so passionate about their work that they used themselves as human guinea pigs, however ill-advisedly.

Sir Joseph Barcroft (1872–1947) was one such character. Professor of Physiology at Cambridge, he was best known for his studies of the oxygenation of blood. He also led mountain expeditions where he analysed the oxygen content of his blood and that of other expedition members.

In the middle of his career, Barcroft built an airtight glass chamber in his laboratory in Cambridge. There, he could live and exercise at oxygen levels equivalent to 16,000 feet. Like many self-experimentation stories, things did not always go to plan: in one experiment, he had to be rescued by colleagues after spending six days in the chamber and reportedly turning blue.

Despite his occasional misguided venture, Barcroft’s scientific legacy was significant and so, in his honour, the University of Cambridge has recently opened a new state-of-the-art facility in his name. Research at the Barcroft Centre focuses on farm animals – mainly sheep and chickens, but also pigs – to model important aspects of human physiology.

However, a significant amount of its work focuses on how we develop in the womb and how this programmes us for increased risk of heart disease in later life. This seems fitting as, in later years, Barcroft became interested in fetal development, and in particular the effects of low levels of oxygen on the unborn baby in the womb.

Carrying on this legacy are Professor Dino Giussani and his postdocs Dr Kim Botting and Dr Youguo Niu. All are also members of the Centre for Trophoblast Research (CTR), which this year celebrates its tenth anniversary and focuses on the interactions between the pregnant mother and the fetus, as mediated by the placenta.

Low levels of oxygen – or hypoxia – can occur in high-altitude pregnancies. But, as Giussani explains, there are far more common causes. “Smoking, pre-eclampsia, even maternal obesity – these all increase the risk of hypoxia for the mother’s baby, as do inherited genetic variants,” he says.

Housed in the Barcroft Centre is a suite of hypoxia chambers – superficially similar, perhaps, to that in which Barcroft placed himself, but nowadays far more sophisticated (and much safer). These are not intended for humans, but rather for animals, each of which is very closely monitored, often remotely using technology developed by the team. 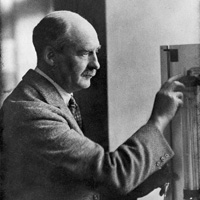 The smallest of these chambers doubles as an incubator for fertilised hens’ eggs. Scientists can watch the development of the fetus directly. They can see how the heart grows, for example, how it is affected by hypoxia, and what effect potential drugs have in ameliorating possible complications.

Of course, we grow in a womb, with a placenta connecting us to our mother and controlling our nutritional intake. Mice and rats are the most commonly used mammals in research, but to model mammalian development in longer-living species with similar rates of development to humans, it is necessary to turn to larger animals. Sheep make a good model. Not only is their gestation – and postnatal life – more comparable to a human’s than to a rat’s, but a newborn lamb’s physiology is also similar in a crucial way to a newborn baby’s: its heart is mature at birth. By comparison, a newborn rat’s heart is still very immature.

For part of gestation, the sheep are placed in hypoxia chambers, which contain finely controlled, lower-than-normal levels of oxygen. “This reduces the amount of oxygen in the blood of the pregnant sheep and thereby in her fetus,” explains Botting. “This mimics conditions where the placenta is not working appropriately, as in pregnancy complicated by pre-eclampsia or maternal obesity.”

The pregnant ewes deliver outside the chambers in normal ambient air. Once born, most of the lambs are put out to pasture in the paddocks adjacent to the Centre, where they grow to adulthood.

“The lambs which were hypoxic in the womb are not noticeably different,” says Giussani. “The sheep will effectively live a normal life. That is the very point, because underneath, a silent killer is brewing; we want to investigate what happens as they grow because there is a theory that a complicated pregnancy may increase the risk of heart disease in the offspring later in life.”

Professor Abby Fowden, Head of the School of the Biological Sciences, and another CTR member and user of the Barcroft Centre, says that the facilities are unique. “It’s probably the only centre in the UK that has the capacity – the surgical and care facilities – to do these kinds of long-term developmental and neurodegenerative studies,” she explains.

Like Giussani, Fowden and her collaborator Dr Alison Forhead are interested in how the early environment in the womb programmes us for disease in later life. They are particularly interested in the role of hormones – in both the mother and the fetus – and how they affect growth and development.

There are some conditions, such as hypothyroidism – whereby the body produces insufficient thyroid hormones – and maternal stress, that probably affect normal fetal development, but about which surprisingly little is understood. To model these conditions, Fowden and Forhead again turn to a range of mammals including sheep and pigs.

As Forhead explains, normal development of the fetus is crucial for health in later life. “In the case of many organs, you’re born with a certain number of functional units, and in postnatal life you don’t have the capacity to change that number. So the number you’re born with has long-lasting consequences.”

Take nephrons, for example. These are functional units of our kidneys that filter the blood and are responsible for how much salt and water is excreted into the urine. “If you’re born with fewer nephrons, this has consequences for how much salt you retain, setting you up in later life to be at greater risk of developing high blood pressure.”

What is apparent from this work is just how much of disease in later life is programmed in the womb. While our lifestyle – our diet, how much we exercise after birth – plays an important role in whether we develop heart disease or type 2 diabetes, for example, much of the risk is present before we are even born, programmed during pregnancy into how our DNA and tissues function.

And these effects don’t necessarily stop at the next generation, as Giussani is discovering in his parallel work with rodents, which allows two or more generations to be studied in a comparably short time.

“If we look at the ‘grandchildren’ of pregnant rats that had a hypoxic pregnancy, we see this disease risk being passed on again, but in a really interesting way,” he says. “A male ‘child’ passes on the cardiovascular risk to the ‘grandchild’, but female offspring confer protection. This is really exciting as inheritable protection against a future risk of heart disease has never been demonstrated in mammals.”

In other words, while we must still recognise our own contribution to our risk of developing certain diseases, some of this risk was programmed into us before we were born: in fact, even before our parents were born. Work at the Barcroft Centre – in monitoring animals for not just one generation but several – will be vital for understanding the consequences of pregnancy not only for our children but also for their children – and even their children’s children.

High doses of ketamine can temporarily switch off the brain, say researchers