Pollution causes 30,000 people a year in the UK to die early yet most of us are unaware of the degree to which we are exposed to it. Low-cost pollution detectors could provide the answer.

To work out the factors we should be worried about, and how we can intervene, we need to rethink how we measure what’s going on

Rush hour can be maddening. Roads congested with traffic, public transport overcrowded, pavements heaving with people. But as well as the frustration, there’s a sinister side to the commute to work: every breath you take could be adding to your risk of dying prematurely.

Air pollution is the world’s largest single environmental health risk, causing one in every eight deaths according to figures released last year by the World Health Organization. In the UK, 30,000 people die prematurely every year as a result of poor air quality, and it costs the NHS and wider economy many billions each year.

Traffic is the main culprit; however, industry, domestic heating, power generation and burning are all contributors to pollution. And although the effects of pollution might be noticeable on a particularly smoggy day in a large city, decades of exposure to only slightly higher levels – a level we wouldn’t even notice – can increase the risk of heart and lung diseases, stroke and cancer.

“To work out the factors we should be worried about, and how we can intervene, we need to rethink how we measure what’s going on,” explains atmospheric scientist Professor Rod Jones.

In the UK, the Automatic Urban and Rural Network provides valuable hour-by-hour assessments of air quality. But with only 171 monitoring stations at fixed sites nationwide, large areas of the country remain uncovered. Cost is the main limitation to developing a higher density network. 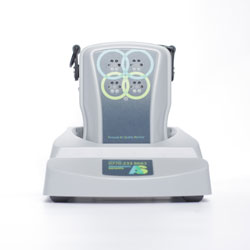 With this in mind, Jones’ team, together with industrial partners and other universities, has been developing low-cost pollution detectors that are small enough to fit in your pocket, stable enough to be installed as long-term static detectors around a city, and sensitive enough to detect small changes in air quality on a street-by-street basis. Their findings are now informing research projects aimed at improving air quality in major cities across Europe and North America.

The detectors are based on electrochemical sensors developed by project partner Alphasense for industrial safety, where detection of toxic gases is needed at the parts-per-million level. Monitoring air quality, however, requires parts-per-billion sensitivity. “Rod and I had the confidence to believe that we could push our sensors to lower concentration levels, and yet keep sensor costs low,” says Dr John Saffell, Technical Director at Alphasense.

The electrochemical devices the team developed can measure a wide range of pollutants, including carbon monoxide, nitrogen dioxide and ozone, and they contain laser technology (developed by the University of Hertfordshire) to detect particulates from cars and lorries. The addition of a GPS aerial allows air quality data and location to be mapped simultaneously.

A series of proof-of-concept studies followed. Personal devices were strapped to bicycles, carried in cars and on buses, and static devices were attached to lampposts and stationed at roadsides and at critical pollutant sites. Fifty static devices were also deployed around London Heathrow Airport to record 22 months in the life of one of the busiest airports in the world.

“This was the first time technology like this had been tested in real-world situations as a high-density network,” says Jones, whose research at Heathrow was funded by the Natural Environment Research Council. “We could see huge variability in the exposure to pollution that people encounter as they move around the urban environment, including ‘hotspots’.

At Heathrow, we could see the airport turning on and off during the day, individual aircraft taxiing and taking off, and the effects of wind direction and the perimeter and M25 motorway road traffic.”

They also discovered that sensor performance can create new opportunities. Jones and colleagues had to develop new smart software methods capable of separating local pollution events from background signals (pollution transported from long range) and then to calibrate sensors across networks. Plus, they needed to move from being able to process the data after it has been collected to doing so in real-time.

The team has been working with Cambridge Environmental Research Consultants – developers of world-leading air quality modelling software – combining the unprecedented level of data created by the pollution-monitoring studies with model output to enhance the understanding of pollution dispersion.

For instance, sensors can be used to ask whether pollution along bus routes is improved by upgrading the exhaust processing on a bus fleet; whether people living at the top of high-rise buildings experience more or less pollution than people at street level; and to what extent changing a route to work, even from one side of the road to another, can affect an individual’s exposure.

Last year, the first commercial product (AQMesh) was released by UK manufacturer Geotech, which specialises in environmental monitoring equipment. AQMesh uses Alphasense sensors to sample every 10 seconds, and data processing is carried out in real-time using cloud computing software similar to that developed by the Cambridge team.

“When the project started in 2006 there were lone voices calling for a different approach to air quality monitoring,” explains Geotech’s Commercial Manager Amanda Randle. “The Cambridge team and Alphasense helped us to understand the sensor’s full potential, and now we have a product that can be placed exactly where it’s needed and provides valuable information.”

And now the approach pioneered in Cambridge is helping to inform two of the largest air quality research studies of their kind.

The AirSensa project, run by the non-profit organisation Change London, aims to deploy large numbers of air quality sensors across the whole of Greater London. Alphasense is providing the sensors and supporting the engineering; and Cambridge is helping with data interpretation in a project whose ethos is “you can’t manage what you can’t measure.”

Meanwhile, the methodologies the researchers developed in the pilot study at Heathrow are contributing to CITI-SENSE, an EU-funded €12.7 million project providing wireless networks to eight cities across Europe. CITI-SENSE involves 27 partner institutions from academia, the healthcare sector and industry (including Alphasense and Geotech), as well as the general public. Citizens across Europe will be involved in data collection through personal monitors and in community decision-making to choose monitoring solutions for spaces such as schools and urban public spaces.

“Even though the effects of poor air quality on health are well known, irrefutable evidence of the scale of the air quality issue and the benefits of ameliorating strategies is urgently needed,” adds Jones. “CITI-SENSE provides a test-bed for both rolling out the new technologies that are coming online and for drawing on the ‘power of the Citizen’ to guide how society responds.”

Conservationists may be unintentionally spreading pathogens between threatened animal populations