Born 500 years ago, Andreas Vesalius has iconic status in the history of science.  Cambridge University Library holds several copies of the remarkable books that he published to revive the lost art of anatomy and promote his own career as a physician. Historian Dr Sachiko Kusukawa has curated an online exhibition to celebrate Vesalius's achievements.

Vesalius's books were complex statements about classical ideals of medicine and the role of anatomy. They demonstrated through their beautiful illustrations his grasp of human anatomy, and the detailed knowledge he’d acquired through carrying out dissections.

Andreas Vesalius was an ambitious young man who was not shy of self-publicity.  Born in Flanders 500 years ago, he had his eye on one of the most prestigious roles in medicine. He sought an appointment as personal physician to the Holy Roman Emperor, Charles V. To optimise his chances, Vesalius set out to demonstrate his extensive knowledge of the workings of the human body. One of the ways he did this was to publish in 1543 an extraordinary tome known as the Fabrica, in reference to its Latin title which translates as ‘Seven books on the fabric of the human body’.

Vesalius dedicated the Fabrica to Charles V and presented the Emperor with a copy of what must be the ultimate CV. “Vesalius was only 28 when he produced the Fabrica and its companion piece the Epitome. He was already an accomplished physician and anatomist. He’d made a name for himself and developed connections all over Europe. His portrayal of himself in his books suggests that he was supremely confident of his abilities. Today we would probably label him as brash,” said Dr Sachiko Kusukawa, who has curated an online exhibition celebrating the 500th anniversary of the birth of Vesalius on the Cambridge University Library website.

In keeping with his objective of promoting his career, Vesalius appears centre stage in the illustration on the frontispiece of the Fabrica. As the historian Dr Andrew Cunningham explains in a short film for the exhibition, Vesalius shows himself as the star of the show, performing a dissection surrounded by crowds of admirers. Most striking are three figures in togas who represent the learning of the ancient world. They are Galen, Aristotle and Hippocrates and their presence in the picture underlines the way in which the scientists of the Renaissance were reviving the hands-on practice of anatomy in classical times after a long period in which it had fallen from favour. 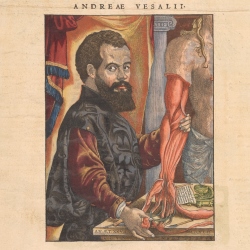 Almost as remarkable as the Fabrica is the Epitome, also published by Vesalius in 1543 and presented to Charles V’s son, the future Philip II of Spain. Now considered watershed publications in the history of anatomy, these books were innovative in both content and form. By means of his text and illustrations, Vesalius sought to restore the art of anatomy to its rightful place as the foundation of medicine. With their daring use of a range of visual devices – from full-length posed figures to classical sculptures  to paper pop-ups to illustrate the positions of the organs – both books are nothing less than works of art.

Scholars have been unable to discover how many copies of the Fabrica or the Epitome were produced – but it is likely to have been between 300 and 500 copies, judging from other scientific books of the period. The surviving copies are now scattered worldwide in public and private collections where they are considered rare and precious treasures that capture the essence of an era awakening to scientific endeavour. On the rare occasions that copies come up for sale they change hands for sums that reflect their historical significance as books produced by a man often described as the ‘father of modern anatomy’. In 1998 a copy of the Fabrica that had been presented to Charles V was sold by Christie’s auction house for $1,652,000.

By virtue of Cambridge University’s 800-year-old history, and its legacy of well-endowed libraries and generous benefactions, the University Library is fortunate to have, in its collection of 16th century medical texts, four copies of the first edition and two copies of the second edition of the Fabrica. In addition, the Library has a unique hand-coloured copy of the Epitome once owned by the Professor of Anatomy at Cambridge, Alexander 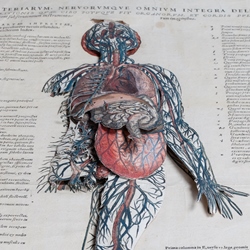 Everything about these books is designed to impress those who came into contact with them. “The Fabrica and Epitome were lavish productions which reflect the skills of the very best artists and craftsman. The wood blocks were cut in Italy and the books were printed in Basel which was then an important centre for printing. These were not text books aimed at students and nor were they made to be taken into the dissection theatre or to the bedsides of the sick or injured," said Kusukawa.

"Rather, Vesalius's books were complex statements about classical ideals of medicine and the role of anatomy. They demonstrated through their beautiful illustrations his grasp of human anatomy, and the detailed knowledge he’d acquired through carrying out dissections. Such books would have been purchased by learned medical colleagues to add to prized collections of weighty tomes of knowledge."

“At a time when most medical texts were small notebooks, Vesalius opted for a big-is-beautiful approach. The Fabrica measures 43 cm by 27 cm and the Epitome is even larger at 55.8 cm by 37.4 cm – and their generous dimensions allowed Vesalius to commission illustrations that work on a grand scale. The illustrations are wood cuts. It’s a technique in which the space between the lines in finished image is created by using a knife to cut away the surface of the wood block and the skills required to achieve the fine lines in the illustrations are quite exceptional,” said Kusukawa. 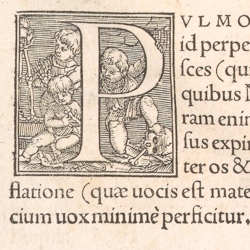 Vesalius worked with the Venetian painter Titian or one of his pupils. What is certain is that Vesalius must have collaborated closely with his artists and craftsman to translate his first-hand knowledge of the anatomy and morphology of the human body into drawings. As a fusion of science and art, the illustrations reflect the artistic conventions of the Renaissance – for example in the stance of the human figures and the idyllic landscape backdrops in which they are posed.

An ingenious use of paper cut-outs and pop-ups to show the positioning of the organs in the body was developed by Vesalius in partnership with the artists and craftspeople involved in the production of his books. They are a neat solution to the problem of showing how the body is composed of layers and how its component parts work together. Decorated initial letters to the sections of and within the books are another notable feature. Each decorated letter tells a story relevant to the text: one shows grave robbing for corpses to dissect, another suggests how to boil a body in a cauldron, and yet another how to articulate a skeleton.

Vesalius means weasel and it was a name of which the great anatomist was proud. The illustration for the frontispiece of the Fabrica is topped by a coat of arms bearing three weasels and held aloft by a pair of chubby putti. Vesalius’s strategy to impress the powerful inner circle of Charles V paid off: in 1543, immediately after the publication of the Fabrica, he was appointed physician to the Holy Roman Emperor. Five hundred years after his birth, copies of the books he produced exist in the collections of one of the world’s most important and extensive libraries. The Fabrica and Epitome continue to impress all who see them – and now for the first time they can be viewed online with an accompanying commentary highlighting some of their remarkable features and setting them in historical context.

In her book Picturing the book of nature: image, text, and argument in sixteenth-century human anatomy and medical botany (University of Chicago Press, 2012) Sachiko Kusukawa discusses some of the images that feature in the Fabrica and Epitome.

Inset images: a portrait of Vesalius in 1543; the multi-layered manikin in the Epitome; an initial from the 1543 Fabrica (Cambridge University Library)

Vesalius undertaking a dissection, in the hand-coloured frontispiece to his 'Epitome' (1543)